Let them NOT eat cake. Let them look but don't touch. Except that piece on the floor- you can eat that one.

I'll apologize in advance- I did not take as many pictures today as I should have. I was running late, and it seemed unfair to the participants to take a lot of pictures before they were judged (lest I seem biased), and afterwards we had to "critique" cakes, so i didn't have many chances.

But this is what I did get:

These are some of the b-day cakes. Sadly, I didn't get a picture of the winner. It was a fairy-taleish cake with a mouse that lived in a pumpkin. It was very perfect and pretty and kind of girly.

All three judges (Including yours truly) picked it to win. The one on the left in this pic was adorable. it had frogs swimming in a pond that waterfalled over the edge of the cake. The "water" was a clear blue gel icing that was pretty cool. It was my choice for third place, but sadly it didn't make the cut.
The other cakes here were: the obligatory "red hat" cake (very well done, though), a cute but not technically advanced enough cake with penguins swimming in a frozen landscape, and a Terrier perched on a pink tuffet (which was actually pretty stinking cute, even if it was kind of odd). After a break (I went to the Twin city Grille by myself and had a salad and a glass of wine while I read the new issue of Bust with Miranda July on the cover), the wedding cake competition began.
To put the size of some of these cakes in perspective, look at the cake on the left compared to the woman next to it. And that was only three of the five tiers that particular cake would eventually have.
Huge.
But that cake didn't win. I rated it number four- I really liked the finished product overall. It was very Renaissance Fair-ish, but I didn't hold that against it. 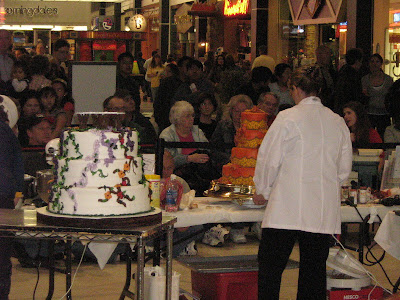 Lined up for judging.
You'll note that the second cake in, the tall chocolate number, wasn't as structurally sound as it needed to be. The top tier tumbled to the floor as we watched.
Sad cake. 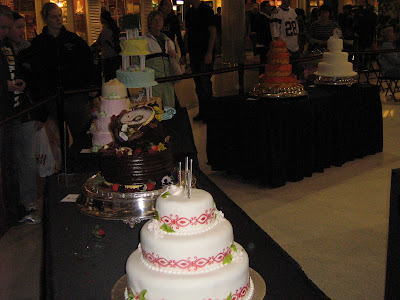 It was pretty before the "accident", but it wasn't in the top three anyways.
Still, I felt a little bad for the lady that made it. 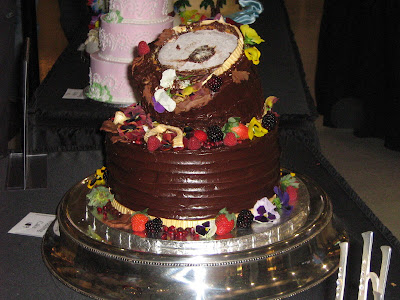 And that's it.
Sorry.

Oh, except for these.
I LOVED the orange and yellow cake, but it ended up not placing due to some technical points being lost. 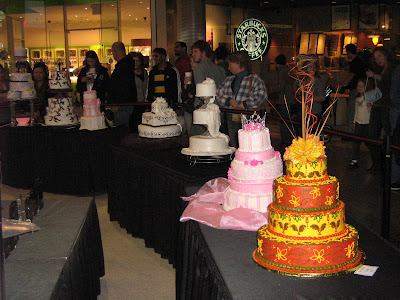 And we all lived happily ever after.
The end.

Posted by Whiskeymarie at 5:49 PM

AWESOME!! (Yes, I used it.) Cake destruction - I can't believe it happened! Thank you Whiskeymarie - you win the title of Lollie's Favourite Person this week. If I had some cake, I'd feed it to you like we were getting married (now that I've made you gay due to nasty, hairy, booby speedo pictures).

let me try this again! I like the yellow and orange cake best too. I like the festival party colors. Also it matches your blog color sceme and that can't hurt.

i am saddened by the falling cake.

and i am saddened by the brown and orange cake not winning.

and then i was massively relieved by ms. prunella von fiberbottom, who made me laugh out loud.

beautiful cakes...i love the yallow and organge too...this really thrills me bec i do cakes once in awhile...when i have time

Some of those cakes looked really cool. Did you get to taste test as well?
How fun...
Stacie

One day I'd like to try my hand at making a fancy-pants cake like those. Of course, the best part would be failing and eating the mistakes.

Oh, and you've been like tagged and stuff by me. Just to kind of help you if you need inspiration for your daily posts. You can check out my blog-type thing for details!

How is it that yu go to judge cakes? can I be you in my next life. they look SO yummy. I hope you got to eat a bite of each one!

I could never make a cake that looked anywhere near what those look like even if I had an entire day. Wow!

Wow. I don't even know what to look for in a cake.

How would this one have placed? It frightened me. Even more so when I saw the "making of" pictures.

butrfly- Not too high in my book as it totally freaks me out. Am I alone in thinking that having a life-size cake topper of YOUR HEAD is possibly #2 in the narcissism olympics, #1 being having a blog?
(wink)
And no, We didn't eat the cake. Much like beauty pageants, this one wasn't about substance as much as it was all about pretty.

Did she have the "final" picture in that set??? The whole cake looked like her!! The cake was her dress! Apparently, they were supposed to make one of her husband, too, but ran out of time, so...yeah. I love the info I get from reading wedding planner's blogs.

Musta sucked to have been collapsed-choco-cake-lady. So sad.

Oh, cake. Those look so.delicous. I love me some good sweet sugary cake. Especially if they have buttercream or fondant icing. Hate the whip cream frosting! Ew, yuck! Years ago one of my sister's took a cake decorating class. Every week she'd come home with a new cake. Sadly, I was on the Adkins diet at the time, trying to eat only cheese, eggs, and meat. It was horrible. Needless to say, I cheated on the diet quite a bit.

Oh, cake. Maybe I should just go buy one for kicks? So I can revel in the sweet frosting goodness?

That's sad about the one that fell apart. How embarrasing. :( After all the work one puts into a cake, and then to have it topple over, like a scene from a movie.

what a charmed life you live

Judging, Caking, Posting - You exhaust an old woman like me with all this frenetic activity!

Oh but I am so delighted that you do.

And speaking of what you do... what did you do to that cake? Were you up to some cakey-no-good?

How did you get asked to be a judge? And what was this event? Was there anyone we know doing a cake or was it amateurs/hausfraus? Can I ask any more questions?? ;)