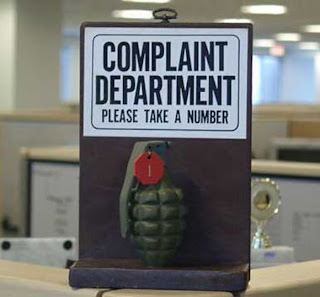 So, about a month or so ago I got a speeding ticket.
I've only ever had one other speeding ticket in my life, and that was 11 years ago when I was pulled over with a large group of cars and was issued a ticket without even getting to say two words to the occifer, let alone treat him to the one-woman, one-act play that I have titled "Would a quick handie get me out of this? Because, I totally would: the Whiskeymarie Chronicles."

This time I was actually pulled over, flashing lights and all, and yet again I was denied the deep, meaningful and often tearful interaction with the Popo that so many before me have used to "get out of a ticket", whatever the fuck that means.  Nevermind that I never, ever speed on purpose (well, not 99.9% of the time anyways), and that I was going the same speed as everyone around me- in fact, there were people in the lane next to me going faster than I was, which only leads me to believe that I do, in fact, have an evil leprechaun that follows me around with the sole mission in his miserable, lucky-charms-infested existence being to get me into trouble.  Man, I hate that little green asshat- I've named him Seamus MacDouchydick.

I was informed by Occifer Mustachenstein that, while he was making my already stressful day suck so hard that it would later be entered into the Shitty Day Hall of Fame, there was a bucket of gold at the end of this dung-colored rainbow: I could go in, talk to one of Hennepin County's many delightful paper pushers, and if they deem me worthy, I could pay the fine, but keep the ticket off of my record, providing that I don't get any more violations in one year's time.  These violations include (but are not limited to): speeding, driving naked while texting threatening messages to members of Congress, running over old people for sport, and playing "bumper cars: 3D" with my vehicle.

So last week, I got up early-ish, put on my finest dungarees, and drove downtown to deal with this.  One can make an appointment for this meeting, but I was informed that the earliest I could get one of these alleged "appointments" would be late January, which means that by the time I saw anyone, my $150 ticket would have grown into a $4,785 ticket, and yet another pesky warrant would be out for my arrest (someday I'll tell you about the other one- it involves donkeys, stalking, diapers and Clive Owen.  The gag order currently forbids me from giving you any more details).  I was told to try the "walk in" service.  I was also told to get there early, bring a book, and plan on a hefty wait.  Fun!

I arrived about 8:45- I walked in, talked briefly to a sour-faced clerk behind bulletproof glass, then pulled my ticket from the dispenser.  It was number 36, they were currently at number 9.  "Hmmm.  This isn't so bad!" I thought.  Not like the one time I went to the DMV and pulled number 11 and they were only on number 22- as in, I had to wait for 89 people to go before it was my turn.  Seriously.

The office where I had to go is located on the ground floor of the Courthouse building, and it is a dank, dreary, sad little place where one could easily find oneself planning one's own grisly suicide.  I kind of expected a wide assortment of folks waiting along with me, but mostly it was a shiftless, crabby, shady bunch, and judging from the conversations I had no choice but to eavesdrop on, many of them had spent many other hours and days in that particular office.  One woman in particular, obviously in deep, soulful love with the sound of her own (very loud) voice, had been there twice already this month because of "bullshit" cops that seem to take issue with people smoking weed while riding as a passenger in someone else's car.  Her charming outbursts every 3 minutes or so that "This is bullshit" really helped things as well, as if none of the rest of us would have recognized the bull shittyness of the situation without her brilliant observations.  Yeah, lady- no one else here has anything better to do- in fact, I'm kind of enjoying sitting here, smelling mystery farts that keep wafting over, and listening to you blather on about how you getting a parking ticket for an expired meter counts as racial profiling.  It took every fiber of my being to not reach across the stained carpet, grab her around the neck, and rip her loudmouthed head clean off in one satisfying and forceful tug.

So I'm waiting while trying really hard to not commit premeditated homicide, and things seem to be moving along fairly smoothly.  People are getting called forth to the inner sanctum, they depart, then more minions are called forth.

When seventeen hit, a few of us took notice and started looking around- "How come they aren't calling any more numbers?" "Is something wrong?" "What the fuck is this motherfucking bullshit?" (You can guess where that last one came from.)  (Yes, it was me.)
Twenty minutes, then thirty minutes came and went with no movement.  The guy holding number 18 started crying, but number 24 consoled him and talked him off the ledge.  Number 42 started offering people cash to trade numbers.  The guy sitting next to me- number 30- started fidgeting and making a strange, low humming noise.  I sat there, after finishing reading my Real Simple magazine, and already halfway through my short book, hoping that the humming wasn't a precursor to a total meltdown involving me, violence and/or humping.

Once we hit the 45-minute mark with number seventeen, the shit hit the fan.  Lady loudmouth started pacing the room, muttering to herself about having to plug her meter again, as well as her love of weed and how she could use a hit right now.  The guy trying to bribe ticket holders upped his offer to $40, without any takers.  People coming in were being told that it would likely be a 3-hour wait, which meant that about every third person that approached the window ended up either yelling at the clerk, storming out, or bargaining with her as to why they needed to be seen sooner than the other 65 or so people sitting in that sad, farty office.  One of my favorite moments from this day was when two women walked in and I heard this exchange:
Woman #1: "Damn, I should have got here earlier!"
Woman #2: "Damn, girl- you should have woke up earlier!"
Woman #1: "Girl, you know I was doing my hair.  I'm tired"
Woman #2: "Bitch, I ain't waiting for this shit.  And your hair is busted."
And...cue angry women storming out of the office.  (And for the record: Her hair was totally busted.)

Then, my second favorite moment of the day occurred.
Lady Loudmouth had to go plug her meter and duck into a doorway for a quick hit (judging from how she smelled when she returned, anyways), and the funniest thing happened.  The minute she walked out the door, the gates of heaven opened, a glorious light spilled forth, and...

Number eighteen jumped up, wiped the tears from his face, hugged his comrades, and walked towards the clerk and the light.  Hurrah!  All is right with the world!  The angels have crapped sparkles and rainbows on us!  I love bureaucracy!

Unfortunately for Lady Loudmouth, her 20-minute trip to the meter yielded the hilarious (to me) and disastrous result of her missing her number called.
Ba-zing!
Upon her return, I braced myself for what would surely be mayhem.  When she found out that she missed her chance and would have to wait yet another 30 minutes until they could get to her again, she looked like she was about to do something that would surely get her the lead story on the evening news: "Marijuana-addled loudmouth broad goes ballistic at the courthouse: Brilliant and ravishing St. Paul woman sustains minor injuries to her uvula while subduing crazy lady.  Awesome St. Paul woman will be honored as a hero in a very austere ceremony Thursday."
Or, something like that.

In the end, I wound up waiting 2.5 hours, I paid my fine, kept the ticket off my record (for now) and I (cue heartfelt piano music) learned a little bit about myself, life and this crazy place called Earth.

Then I went home and had a very satisfying poop.  Not the best day ever, but not the worst either.
Posted by Whiskeymarie at 1:35 PM 15 comments: