Rock on, little dude. Rock on.

So I'm back from my vehicular trip to the great white north, and I'm not even hung over today.
And yes, I know I was supposed to be updating you with a real post and such about my activities while I was actually there, but I was actually too busy with the activities to sit down and talk about them. Go figure.

I went up this weekend just to hang out with my girl Waffle. We haven't had a weekend for the two of us to just hang out and do stupid stuff for a while, and I have a long weekend so it seemed like a good time to do just that.

Waffle and I have been friends for 25+ years now. That's a long time to play my straight man, bless her heart.
In case you haven't noticed, I can be a real handful. She is a saint.

And, she has a lovely home with a lovely guest room that I have claimed for my own. I always get dibs because I'm special like that. She even kicks the dog out of there when I visit.

A little tidbit about Mrs. Waffle:
She has never read my blog and never will. She knows about it, but the first thing she said when I first told her about it was "blogs are gross." She thinks that it's weird to put your life out there for all to see, and she (accurately) thinks that it's a touch narcissistic. I asked her if we had met before, because if she hasn't figured this out about me by now, well she just hasn't been paying attention then. She knows how it works: I'm Homer, She's Marge.

Now I think it's funny to tell her all about stuff I do here, because it disgusts her. When I told her this weekend about dressing up like a prune just for fun, this is the face she made: 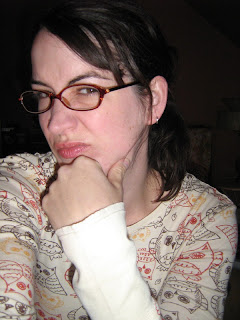 I love to gross her out. She is very easily disgusted, that poor, poor girl.
I also love to motion to her that I have a secret for her, then I burp in her ear.
Good times.
We had a great weekend.

Tidbits from the past two days: 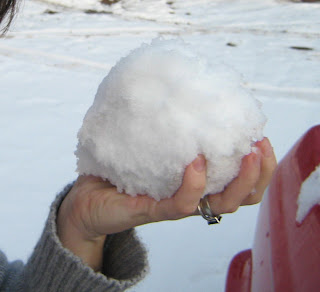 Here is visual proof of the previously mentioned snow.

I managed to find some that wasn't yellow, just for you because I know you hate to play with the pee snow.

When I was little, I thought that the snow that fell from the sky was the same kind of "snow" that sno-cones were made of, so I would pour kool-aid on snow and eat it.

Now that I say/type that random fact about me out loud it occurs to me how gross it is.


We also went to an art auction to raise money for this organization.

I bid on a few things, and went home with two of them. This was one of my items: 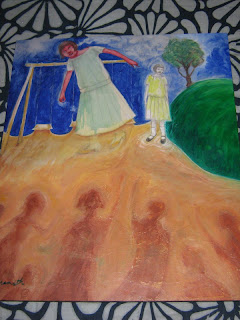 I wasn't really overly excited about this one, but when we were looking at it, Waffle said that it was creepy and disturbing and who would want that hanging in their house?
Duh.
I bid on it and told her I was going to put it in the guest room so she would have to look at the creepy playground girl's face every time she stayed over. I didn't think that my (very cheap) bid would win, but lo and behold...
So now I have to find somewhere to hang "Recess" in the guest room. maybe I'll tack it to the ceiling.

The lengths I will go to just to bug her.

The other item I really, really wanted. Shit, it practically had my name written all over it: 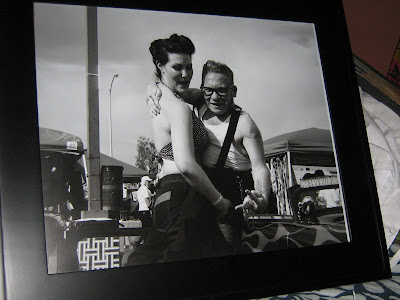 A very large B&W photo of a rockabilly midget with a sexy lady.

And he's doing the whole "Rock on!!" hand signal.


I also bought new shoes to wear to the auction: 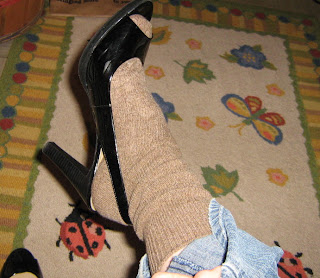 Trust me, they were much cuter with fishnets and my new wrap dress from H&M.


Though, I do think that I could start a whole new trend that Vogue magazine will refer to as "rugged sophistication."

I'm having the idea trademarked as we speak.

So there you go- a weekend update, midgets and all.

Now I'm off- I haven't seen much of the Mr. lately and I think he's starting to get ideas in his pretty little head about hiring my replacement. Good luck, mister. I doubt that "new wife" would be nearly as entertaining, and I'm pretty sure "new wife" has crabs- at least that's what the word on the street is.

Until tomorrow...
Posted by Whiskeymarie at 1:46 PM

The wool-socks-with-slingbacks is VERY Marc Jacobs of you. You're a fashion savant.

Are you sure Rockabily Midget dude is about to deploy "The Shocker"?

Nice ball of snow...and nice chunk of ice! From what I can tell, with the angle and all, the Mr. did a pretty bang up job on the rock. Good on ya Mr. WM!

I was having second thoughts about mentioning this next bit, but I have very little shame, so I'll go ahead.

I'll leave you with that.

The snow actually stuck around up north?? Agh.

I had to laugh when I saw socks with those open toed shoes. It reminded me of when my Ali was in high school. She's a shorty so always bought chunky shoes for added height, and they had to be black. Her favorite pair were open toed and as the weather got colder, she added socks. All you could see peeking out of the bottom of her jeans were her white socked toes. She didn't give a crapola what people thought either.

The recess painting is a bit creepy but I like it too. The big girl, with her hands flailed out, and head tilted all goofy reminds me of the kids I work with. I think you should re-title it "Full Inclusion Means Recess Too!".

Oh the pathways you take us upon with your posts...

From Duluth to Ms Waffle to Snow to Art to the whole shoe/sock thing.

The shoes/socks thing also confirms what I have suspected... Whiskey Marie is no slave to fashion, she creates it and as such, it is a slave to her!

I won't weigh in on the sexy shoes/wool socks philosophical debate, but My God, that rockabilly midget picture is fantastic beyond words - and dare I suggest - a tattoo waiting to happen. I'll donate $10 and a Subway Fresh Meal Deal coupon to whoever gets that inked on their flesh.*

*Offer not valid in all 50 states, see stores for details.

i'd totally hang the rockabily midge in my house while lounging with a cocktail in one hand - staring at the wonderful black shoes you have on and wondering what sick creep messed up the artist in the other.

I thought the same thing about the snow when I was kid. Instead of Kool-Aid we used Coke to make "slushies". That is so gross when I think about it now.

We used to put coke, orange crush, fanta, whatever on our snow...until the day we found dog hair in the bottom of the cups. At least I hope it was dog hair.

I'm waiting for the next photo post, in which I hope you'll present a fashion spread featuring "Rugged Chic". A little black dress with a flannel shirt worn as a jacket? Some Carhartt pants with a sequined evening tank? So many possibilities!

When I was a kid we made "snow ice cream." Of course, back then the snow wasn't coming down through pollution. It was pure as...the driven snow. Heh.

I *love* old school pix and that one rocks. I recently saw one of Kim Novak that I just had to order online.

Sounds like you had a good one all in all and yes, your snow is brilliant. Spoken like a True Cali since we don't get any.


Now there is something you don't see everyday.

unless you are David Lynch.

TG- I do my best to be fashion-forward. I really should put more effort in when taking pictures.

mountjoy- It kind of looks like that, doesn't it? Honestly, that only serves to make me love the photo more.

lol- Holy crap I love you.

Stefanie- i'll see what I can do about including rockabilly midgets more often.

Twisted- though I wouldn't actually wear the cashmere (yes, cashmere) sock/patent combo, I am o.k. with the open toed shoes with tights/socks.
There, I said it.

Fran- I like to think I have an "unusual" fashion sense, whatever the fuck that means.

Gbuns- I wish there were more copies of this pic because It does have you written all over it as well.

dcap- "new wife" is so out of touch like that.

anon- yeah, it's pretty gross. I'm glad I'm not the only one that did this. Ick.

mommy- O.k, that is pretty gross. I think all I ever found in my "slushy" was a few specks of dirt, that I'm aware of anyways.

cdp- with this posting every day thing, I may be reduced to that. Stay tuned...

liz- Your comment made me think of the Simpsons episode where homer finally gets his dream job as a pin jockey at the bowling alley. They give him a satin jacket when he has to quit to go work at the nuclear plant to support his growing family. As he's walking to the plant, it starts raining. There is so much pollution in the rain that it melts his beloved jacket right off.
Ahh...poor Homer.

Nocturnal- maybe I can fedex the snowball to you so you can have some snow of your own.

army- Sigh. I WISH I saw rockabilly midgets every day, what a perfect world that would be.

I didn't know Jesus played with little girls at recess.

Really... who is that next to the little girl?

you are so manure..I mean maTURE!

Those shoes made my heart beat fast. But then the words 'new shoes' always do.

Cool art! And dig the shoes too.

Wow. Fun weekend. I think crazy people like you need an uptight friend to keep them in check. However, I find the painting pretty creepy. :D LOVE the rockabilly picture, though. If the man wasn't being such a jerk right now, I'd show him because he would love it too. But I'm not going to. Because he's being a prick. Ahem.

Glad you had fun!

I saw this pic on google images!

That's my friend Kristina and her friend whos name I forget in Vegas @ VIVA rockabilly weekender.