Can't say I've ever thought of bacon in a sexual way before...

I hate posting videos, but holy hell- this is my new favorite song and video of all time:
*So very not safe for work, kiddos. I don't think I'd watch it with Grandma either, unless she's into that sort of thing. 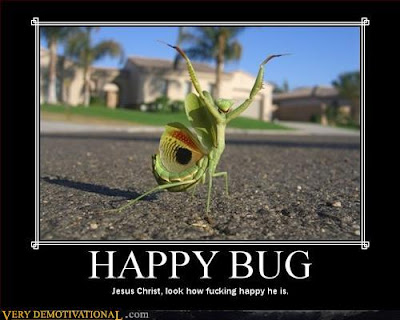 So far, two-aught-ten has been a mixed bag of random stuff- kind of like when you throw a cheerleading squad, a high school math team, six performance artists, a case of vodka, and three goats into a room together for two weeks with only three packs of american cheese and a burlap sack of rutabagas to sustain them. No one knows what the fuck is going to come of that nonsense, nor do I know what the fuck two-aught-ten will have in store for Senorita Happypants, a.k.a. Me.

Obviously, you know I was ousted from the VonPartypants throne, if you read my last post. I'm remarkably OK with it. I've since decided to start my own monarchy on the private island that I created by flooding my back yard and floating 20,000 stuffed animals in the water. It's pretty much a frozen fuzzy tundra right now, but come spring I plan on building a luxury hotel and day spa on it. All hail the Queen! Make your reservations now! No coupons!

I'm back at work after a 20 day break- yes, I know I'll be getting no pity from y'all. Oddly, I'm kind of relieved to have some sort of structure in my life again- while I still managed to do a bunch of fun stuff and get a few things done around the house, I spent an astounding amount of time in shapeless stretchy pants talking to the cats and watching things like "The Golden Girls". I suspect that if I had another week or so off that I would have quit bathing entirely, developed a new language involving variations on grunting, started saving my toenail clippings under my pillow, and probably would have gotten myself placed a notch higher on the FBI's "watch list." I never thought I'd be the one to say it, and I'm sure my tune will have changed the minute I hit "publish" for this post, but it's good to be back at work.

I also started "running", and chose to start this endeavor while we had a string of days where the high temperature for the day regularly hovered in the -10 range. Why I'm "running" is beyond me, and why I'm choosing to put "running" in quotation marks only further illustrates my confusion with the topic. All I know is that "running" (so far) is completely hellish and entertaining at the same time. Never before did I think that I would enjoy something that simultaneously makes me want to vomit, and makes me want to sing happy songs. Well, something where alcohol isn't involved, anyways. We'll see how this "running" thing goes.

I finally have a new desk in the dining room, I currently have my buttocks firmly planted in my new chair as I type. I got tired of being tucked into a corner in the guest room, and now I can better monitor domestic cat/dog relations while I search for the best price for irregular dungarees on Amazon. My sweet new corner of the world: 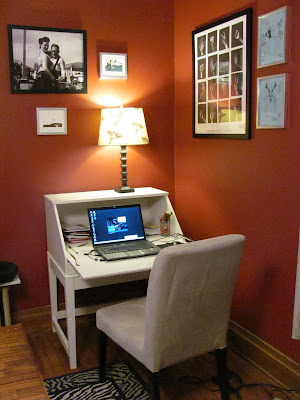 I still have a few new issues to work out, like where to put cords and can I outfit this desk with a refrigerator so I can have pudding within arms-reach, but overall I'm very pleased with my new home.

So, a few new things for a new year, which is as close to resolutions as I'm comfortable with. Resolutions make me all itchy in my no-no bits, similar to a crab infestation. That's fun for nobody involved, trust me.