Do yourself a favor and get drunk before seeing this movie. 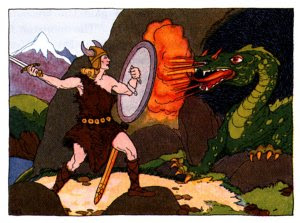 
So no- I didn't love it. But on the other hand, it wasn't the worst movie I've ever seen, so it's go that going for it, which is nice.
Save your money- see it on Netflix. Spend the cash you'll save on booze and pills, or maybe a discount pony.

Move along now- nothing to see here, folks.

UPDATE:
My completely NOT A GEEK husband has corrected me. It was not Viggo M. that I was lusting after. It is some guy named Ray. With the CGI I couldn't tell the difference. Sorry Ray.
The Mr. said he didn't want me putting "bad information" out in internetland, cause' we all know there's none of that out there already.
Thanks, dear.

Posted by Whiskeymarie at 6:21 PM

ahh...so angelina jolie is in that movie huh? that explains why, when I got on the computer after my teenage son there was a search in the history box for "naked angelina jolie beowulf"
oh the joys of raising boys..maybe I should just take him to see the damn movie!

That's good to know. I will definitely save it for netflix. When there are no other good movies coming out. And I will get drunk beforehand...as advised.

what is a "discount pony"?

does it involve anything that requires napkins?

Stacie- She's only "kind of" naked (no nipples, no pooner)- and since it's not really her own body...

butrfly- As well you should.

Landis- You can usually find discount ponies at the Wal-Mart behind the hunting gear, depending on the season. And yes, you will need napkins and tequila.
And probably a bucket of hamsters.

Wait If I get it on Netflix do I misss the cool 3-D gore? Not sure if I want to pass that up? Or Robin Wright-Penn 3-d? Decisions. Now I must ponder......

Tom Hanks creeps me out lately without CGI. Who gets that puffy whent they are married to a hot babe with a lisp like Rita Wilson?

All you had to say was creepy like that Tom Hanks Christmas movie. That's enough to make me stay away.

This is exactly what I would have expected this movie to be. I'll pass. And Robin Wright Penn is so underrated, she's absolutely great in everything she's in and she makes a movie like once every 5 years.

HAHAHAHAHA!! Holy mother of all that is wrong with music this song was craptacular is the best line of the month.

I'm thinking I'd rather read it than watch that creepy CGI shit version, but maybe that's because I was an English major in college.

I've seen that discount pony at Target -- fake fur, plastic saddle and food, etc. But he does come with a little brush so you can groom his mane. I sooo want him.

The song sucks. The movie, well thanks for the review, I would've never gone to see it anyways, as nothing will get me into a fantasy movie that doesn't feature a little boy with a scar on his forehead. And I don't like "Angie" at all. Period.

WHERE ARE THEY SELLING DISCOUNT PONIES???

Or, that's what I WOULD have said, if I were just hurriedly commenting, and not reading WM's recommendation, but I hate Wal-Mart and refuse to shop there. So...

WHERE ELSE ARE THEY SELLING DISCOUNT PONIES?

Duly noted. I will wait for the video.
I remember having to read that story as required reading in 7th or 8th grade I can't quite remember. Anyhoo, I recall enjoying the story...but yeah we all know that sometimes books just don't translate well on screen (interpret that as sucky directors actors...maybe even a sucky screen play)

I like to save time and bring champagne to the movies, and wee little plastic flutes. That way I can combine the activities. But you can't get the 3-D effect from a DVD, can you?

Thanks for the Netflix update. Now I can spend my money on those herbal pills that will boost my "willy" as the 1,000 spam emails I receive daily tells me.

Angelina is SO big in the tabloids, but when you think about it, she's had a fairly crappy movie career. Sure, she won an Oscar for Girl Interrupted, but a lot of her movies have been crap. I'm over her.