...is the thrill that'll getcha when you get your picture on the cover of...Vogue?

As someone who constantly bitches about the unrealistic standards that women these days are constantly being held to (what? You're a size zero? Wow. You must really eat a lot. I'm a negative 6. Beat that, fatty), my next statement may come as a bit of a surprise.

I miss supermodels on the covers of magazines.

Has anyone else noticed that there aren't any "models" on the covers of the big glossies anymore? The celebutantes have reached their sticky tentacles to yet another facet of society that allows them to receive even more attention than anyone ever thought humanly possible. You can't pick up a Vogue, Marie Claire or Elle without seeing the "It" girl of the moment, or whoever happens to have a movie coming out within a few weeks of publication. 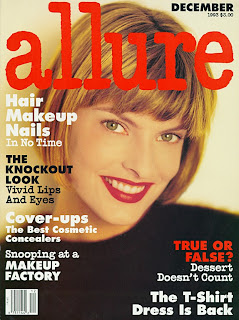 This all happened kind of quietly in the mid-90's. I remember when seeing the occasional Drew Barrymore, Lara Flynn Boyle (pre-skeletor), or even Julia Roberts- but it was the exception, rather than the rule. Up until the slow, deliberate banishment of "non-celebrity" cover girls, I think a lot of us looked forward to seeing real, honest-to-goodness models on the covers of the magazines we read to fuel our wildest dreams of fame, fashion and a jet-set life.

At least I did.
I even had my favorites.

I loved Linda Evangelista's (above and below) versatility. She looked like she was one tough bitch, but no one could pull off as many different looks as her. She cut & dyed her hair as often as I did- at the time. One day she'd have a black Louise Brooks bob, the next month she'd be the mousy girl next door, all fresh-faced and innocent. 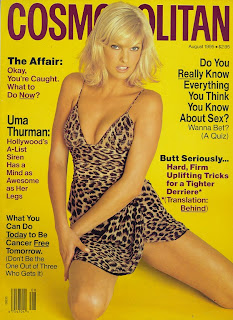 Christy Turlington (below) was another favorite. When she had only been a rising star for a brief time, she boldly cut off her long, long hair into the infamous 90's pixie cut. Seeing how good she looked with the super short 'do inspired me to follow suit and chop off my hair that I had been growing out for 2 years at that point. I love, love, loved it. Imagine my disappointment when she immediately started growing it back, but whatever. 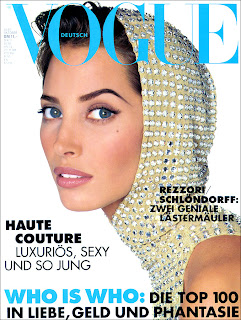 I even liked that crazy, phone-throwing, assistant-assaulting, serial rock star-dating brat Naomi Campbell. No one could ever accuse her of being boring, that's for sure. 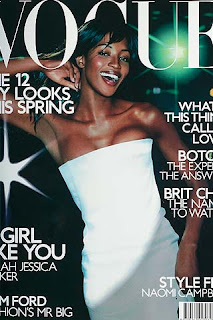 I guess the problem I have with the absence of non-television or non-film faces gracing the covers is this:
Do we, as grown women, as teenagers, as young women (and some men) who still have hopes and dreams of any sort really need to have the bar raised just that much higher? Meaning, now it isn't good enough to gain fame and fortune and the general publicity that goes along with being a star- now you have to add "cover girl" to the mix.
I guess that- for me- when the faces peering out at me in the line at the grocery store were faces that I only recognized because I was a magazine junkie, it was comforting in a strange way. 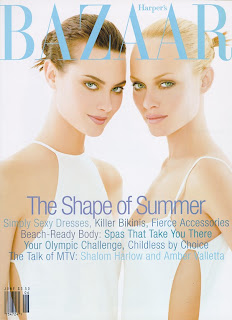 If these impossibly gorgeous girls weren't household names in the more common sense of the word, then I didn't have to feel bad about neither being a celebrity nor a model. Even the girls we referred to as "supermodels" were primarily recognized as such by those of us that devoured magazines and fashion TV like they were made of money-coated chocolate champagne.
Sure, they had the big bucks and privilege that goes along with semi-celebrity and dating rock stars, but for whatever reason I could identify with many of them more than I could with your every day, garden-variety movie star.

But now, the models are of-the-moment and, other than a very select few- pretty interchangeable. The current crop of "supermodels" all seem to have been bred on a farm in Brazil specifically for Victoria's Secret. And yes, they're unbelievably, stunningly gorgeous- I get that.
They're just not all that interesting, I think.
And most of the remaining crop of models just look blank and scarily thin.
Celebrities that I don't even recognize stare back at me from Vogue and Allure.

Things seem out of whack, somehow.

But then again, I am very easily confused.

remember when mila jovovich emerged? i think she was on the cover of our seventeens or whatever. she was the first model i ever really recognized and kind of followed. then she released a cd when i was in college -- my roommate had it -- and then she began popping up in movies. i kind of felt like i knew her.

I can't believe I'm contributing to this conversation, but I will have to say that Christy Turlington is and always has been hands-down one of the the Most Beautiful Women Ever Ever. Two "evers" because I'm that serious.

c- I Know! I still kind of have a soft spot for old Milla.

McGone- I agree, in a totally only sort of lesbian way. Very brave of you to join in the conversation.

I'm so tired of seeing those Hills/Laguna Beach girls!

Loved me some Christy. Oh, and Ed Burns is totally yummy. and now I think I'll go listen to some George Michael's Freedom 90.

I liked Cindy Crawford. That's why my modeling career stalled - because of all those damn celebrities. You believe me don't ya WhiskeyMarie?

Speaking of Cindy, I am going to need to post a photo of my cousin Marie. EVERYONE I knew who grew up in the eighties thinks she looks like a yound Cindy Crawford. Although she was raised in Apple Valley not on a farm.

You make a good point. I hadn't thought of it that way, but I too liked it when the relatively anonymous beauties on the magazines weren't also on our televisions. They were less intrusive as models than today's crop of actor/models.

Slightly embarrassing confession: Sometimes I find myself looking through magazines for the girls - ANY girls - from the past umpteen cycles of America's Next Top Model. Where do they go? I never see any of them again, except on shows that include Tyra.

I am almost related to Amber Valletta (who grew up in Tulsa). She's the great-niece of my late uncle's wife. Are you impressed? ;)

I miss real models too. Model to actress is OK but I don't like the reverse...stay on the cover of People, where you belong, and leave my Vogue to the proper models. Has anyone ever seen Milla in The Messenger, the Luc Besson movie about Joan of Arc? She was an awesome Joan of Arc, I love that movie.

I kind of miss models on covers, too! From the gossip magazines to tabloid tv shows to the regular magazines, it's all the same people!! Boring.

Plus, I know the models are all airbrushed, too, but the celebs on the cover (especially Cosmo) look like they're posed and then edited to LOOK more "modely" and it is ridiculous!

Going back even FARTHER! In the 50's and 60's, fashion magazine covers were almost an art form. Being old and living in Portland (keep it weird!), I no longer pay much attention, but I do think it is an opportunity missed. Famous people already monopolize the covers of so many other magazines. Bring back the class!

Oh dear God, my mom is commenting on everyone's blogs now!
WM - I hope you're feeling better, but I must say, your fever induced a splendid post!
The aforementioned mom used to subscribe to Vogue & Glamour, which I read, religiously, from the age of 7.
I credit myself with "discovering" Linda Evangelista. Seriously. I was like 10, but I can spot talent like nobody's business.

Linda Evangelista was one of my absolute "old school" faves.

Even I, a lesbian, will comment on this great post! When we were in high school, my sister Mary used to collect Vogue and Bazaar and all those hi-toned mags, and she knew ALL the models' names, even the guys (remember Michael Schoeffling's Missoni ad, pre Sixteen Candles?), and so I knew them all too. I remember we even watched this documentary on the supermodels and Eileen Ford, etc., on HBO (before it got extra-shitty). Those were the days. Now it's like you say, the ingenue-of-the-moment. It's crappy now.

Models, celebs, blahblahblah - What I want to know is where the hell is German Vogue's Rezzort Schlongdorff is! Whoo hoo! Sounds like my kinda hotel...

OMG! You're sooooo right. I totally miss the...

Wait. Sorry. I got all caught up in that for a second. I wouldn't know a model from a celebutante.

But, darn it, if it's upsetting you, then I'll gladly sign whatever model-promoting petition you circulate.

I'm so out of the current pop culture scene, that I have no idea who is on the cover of any magazine at the store. I don't really care, as long as they have nice cans.

Beautiful Video (on this very subject)

This says it all.

I completely agree. And I miss when models actually looked like REAL WOMEN. Beautiful, bu they had boobs and hips and LIFE in their faces.