Nachos, beer, and stretchy pants that leave very little to the imagination. 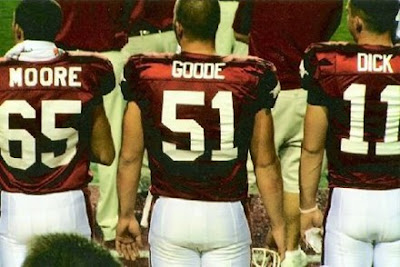 There- I said it.

I have absolutely no interest whatsoever in the game. Never will.
It bores me to tears. No game- with the rare exception of a marathon Monopoly, Risk, Find the Weasel or Scrabble session- should take that long. Ever.

Maybe I'm just pissed that I'm going to have to search far and wide for a place to have bloodies this Sunday with my girls that isn't full of hordes of light beer-drinking, nacho-munching, jersey-wearing "sports enthusiasts". Bucket-o-beer specials will abound, and many a dude (and wives/girlfriends of dudes) will rue the day they discovered chili dogs and fluorescent orange cheese around 11:00 p.m. that night when the slow, steady, thunderous rumble signaling intense gastrointestinal distress sets in. Toilets will be clogged, and plumbers all across this great country of ours will be able to afford that vacation in the Bahamas the wife wants so badly.

I also know very little about fruit bats or the country of Estonia, truth be told. And, as long as I'm getting stuff off of my chest, I don't know nearly as much about freebasing crack cocaine that I could, but I can't say I'm going to run out and pick it up as a hobby.

So there you go. Feel better? You now know my hidden, shameful secrets.

But I still don't give a shit about football.
Posted by Whiskeymarie at 8:59 AM

I do follow football very closely, but don't really care about either of the teams playing, so I have no desire to really watch it, only the feeling that I should watch it. Plus, my dad is really pushing me to go over to his place, and since he has a gigantic TV and usually good food, I will go.

I cannot agree with your chilidog comment, though. I've never met one I didn't like, and tear up my digestive system it may, I will never regret one. I know, I know, they barely qualify as food, but something about knowing I'm taking years off my life with each bite brings out the daredevil in me. Plus, those last few years were going to suck anyways.

I don't watch much football during the regular season, but the Superbowl is a good excuse to have people over and eat some really good snacks. In my opinion, it's more about the food than the game. (Since we're confessing things and all)

i don't give a shit about it either and yet i am dating a man who does. luckily (for me), his team didn't go to the superbowl. is it wrong to be sad for him but inside i am happy for me?

So... what are you trying to say? Do you not like football or something?

Just so you know, football actually ended two weeks ago. But don't tell Jon that.

I'm with you. Don't like the sport, never played it, don't watch it, don't want to. Really don't like the pigging out on the coffee table scenario with cheap beer cans and pizza boxes. Thankfully Hub-E is a non-sports enthusiast as well.

I'm with you, sister. My husband's a fan, but he's working Sunday night, so the game will not be on at our house. I don't object to it (but I do HATE the timeouts...especially at the end. I can't stand the fact that the 2:03 that you see on the screen means that the game will be on for at least 45 more minutes), I'm just not interested.

Could not have said it better myself. Now, where ARE we going to have those bloodies???

I can take or leave football. Mostly it pisses me off that those tight pants are so full of padding that you can't get a real feel for what's inside. Hee.

I suppose your dislike of football is OK. I mean, it's not as bad as kicking dogs or take candy from children.

Dear WM,
I used to despise football also. Then I met my husband who very much enjoys it. Once he began to explain the game to me and I got behind my home team it became a lot of fun to watch it with him and I found myself really agressively rooting for our team and wanting them to win. That said,I respect your opinion...even if it is wrong ;)

Yes all, I am painfully aware that some of you may have to disown me for disliking the sport, but I stand by my drivel wholeheartedly.

Now, back to our usual programming...

lets have a contest to see who can go longer without finding out who won the game. during the regular season i can usually go three-four days without hearing if the vikings won. ... unless i read about it on a blog.

i just attend the parties for the alcohol - not the game.

not even the commercials? some of them are much more exciting than the game.

*walks in, looks around nervously, flips hood up over head, pushes oversized sunglasses up on face securly, steps up to podium, grabs mic, looks around nervously again and says with a slight stutter*
"me neither man! I HATE football! *gives nervous hand jesture pulling fist down in a victory motion and yells* "YEAHHHHH! I HATE FOOTBALL!" *drops mic and runs hurriedly from stage for fear of husband walking in at just that exact moment.

I thank you WM, for giving me a voice during this hard time.

Maybe you can bring your vodka and Mary mix to a girlie tea house...?

I only like the Superbowl parties for the 7 layer dip. I plan to indulge on Sunday. Big Time.

you crack me up! that's all i can say! i have to admit that i watch more for the commercials than anything, but if i have to pick a sport to watch, football does win hands down for me.

good luck finding a football free establishment with the girls, and enjoy your superbowl-free sunday!

Thought leader and blogger queen Whiskey Marie speaks the naked truth once more, as it needs to be spoken.

Ugh. My husband and step-daughter can't wait. Me, I am just not interested.


Never have been.
Never will be.

OKAY, "What about the commercials"? they are no longer creative and fun like they were. And there are not nearly enough of them to waste time with football.

That photo is priceless.

You are soooo missing out. The Spandex is the key. Not on everyone, mind you, but on a select—oh-so-select—few.

We have a few spots debuting locally, so we have a workish function to attend.

Super Bowl? Is that like Puppy Bowl but with people? Weird. I suppose instead of Kitty Halftime they have dancing girls or something? Ha ha, how dumb. Knockoffs are so lame.

Amen, sister. And the shiny pants have never done anything for me, either.

Holla! You and me sister. Speakin' the same language!

Never cared, never will, and I feel very fortunate to be married to a man who cares even less. Actually, neither of us knew the Superbowl was this weekend until yesterday. Yes, we're THAT out of it.

When I was a child I had a catalog that had all sorts of cool bedroom stuff for kids – most of it was based on American football teams. From that I supported the Cincinnati Bengals, because they had a cool tiger pattern. That was my one and only dalliance with American football. Later I much preferred watching gymnastics because of the pretty girls and athletic boys.

Most of the arguments I have with my boyfriend center around football. Specifically, the fact that he watches it ALL THE TIME. He keeps saying that I'd like it if I just 'gave it a chance.' Maybe I should say the same thing to him about those coffee enemas.