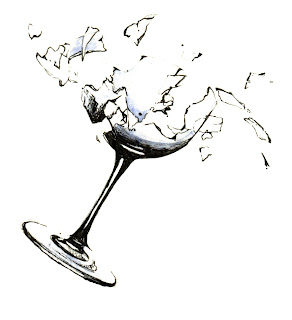 Did you miss me?

Yes, I know it appeared as if I had simply been abducted by friendly and lovable aliens that took me to the planet Martinitron and made me their queen...but the reality is that I briefly joined a "movement" that required me to move to Idaho and work on a communal rutabaga farm and take on several more husbands whilst navigating the murky waters of a "movement" that wanted me to relinquish all of my worldly possessions and dress in a gray sack dress.

I've been back home since Tuesday night, but needed a little "Whiskeymarie time" to get un-discombobulated and wash the rutabaga stink out of my clothes.

I have to say that this was not the most relaxing christmas weekend that I've had. Nope.

I needed yesterday to just lay around, read and contemplate why I needed to eat 47 cookies in the last 24 hours.
And I needed to eat more cookies. 47 just doesn't seem like enough. That muumuu isn't going to fill itself out, you know.
I also read an entire book yesterday. A whole book! Granted, it was Nikki Sixx's "The Heroin Diaries", but fuck it- that counts. And I have to say that, as far as addiction memoirs go, this one easily ranks somewhere in the top five. Calling his drug days debaucherous doesn't really even scratch the surface. This book takes debauchery and wipes its bum with it. A fun read, well worth 6-7 hours of my time for the 350 some-odd pages.

So there you go. That's where I've been. I might even read another book today! Cause I'm cuckoo like that!

I'm back, I promise pictures and whatnot are coming. Maybe even pictures of whatnot.

XO
Posted by Whiskeymarie at 11:59 AM

I was about to put out an APB on you. I know how you feel about the in-laws, I just spent three nights in the company of Sparky's family. I'm ready to never see them ever again for a few months.

Phew. Somebody pour me a drink, thank goodness WM is back. I was more than a bit worried and, ala Heroin Diaries, jonesin' as well.

Whiskey Marie, you are akin to the "smack o' the blogworld"!

Anyway, sounds like quite the adventure and I have learned a new word... teabagging. I just had some tea, but simply squeezed the bag and tossed it into the compost. Who knew? OH - it was not that kind of tea bag!

Well I am sorry for the lows, glad to hear about the highs (in all their variations) and delighted that you are back at home.

As for our holidays- both sets of parents are singing in the choir invisible. That said, I have been given the gift of my sister-in-law. Oh you have no idea.

And as for your mother-in-law, I say an Advil PM or two dissolved in her evening tea should guarantee sleep until 8.30am or so.

You didn't hear that from me. And what do I know, I think Whiskey is smack.

I do the same thing with the driving and the telling the driver how to. The only time the bf & I get close to arguing (it's still early in the relationship) is when I tell him how to drive. He's gone so far as to pull the car over and make me drive.

Glad you survivied the holidays!

Damn, that friend's annual party sounds fun. I am in awe.

I got Nikki's book for x-mas. I haven't started it yet because I know I'm going to read it from front to back also.
Sounds like you had a pretty fun holiday. Welcome back.

Having you and your stories back is the best Christmas present of all. Thank you Santa! You're like the Christmas Angel - but all hopped up on smack. Franiam is right - you're like web heroin. You're Weroin!

ps, I'm kicking the habit (aka you) if there are no teabag pictures in the near future.

If you're posting pictures of teabagging, give me a heads up first.

Powdered-Freezedried-Eleves? Hmmm. I might need some of that for my pesto.

Hey, why didn't you take me with you when you climbed the wall and sprung yourself from this communal rutabaga farm? I hate dresses in gray!!

Lot's o' snow! It's true what they say: snow really tests a marriage. Or something.
The next time I'm sad because I don't live near family I'll re-read this post and appreciate that my calendar isn't full of family-obligated parties.
Also, this party you speak of - is that the barefoot one? You decided to go?

Monkey- No need to involve the authorities here. I'm alive and well, just a little shell-shocked.

Fran- I'm glad I could give you a new definition to add to your vocabulary. I wish my mother-in-law could sleep until 8:30, but that ain't ever gonna happen. I could slip her a roofie and she'd still wake up at the crack of dawn to slam cupboard doors and talk to herself.

Shannon- My Mr. tried to take control of the driving no less than three times. My reply:
"Um, yeah. That's not gonna happen."

lara- The party gets more and more debaucherous every year. I expect to not live through next year's.

anon- You won't be able to put it down. Holy crap it sucked me in.

lol- I'll see what I can do as the picture in question is not in my possession, and I fear that the graphic nature of the photo would get me into trouble with blogger. But seriously- the picture is hilarious.

mommy- They're my secret xmas ingredient.

Suze- I tried to get you out! You just kept mumbling about "the leader" and "kool-aid" and wandered off to weave gray fabric.

amaya- not THE party from a few weeks ago, but another shoes-off event nonetheless. I only give in for this one because the hostess is my BFF of 25+ years. Don't worry though, I bitch to her about her stupid rule every chance I get.

Missy, this is NOT Halloween. You just stop it with the horror stories this minute!
"stranded", "in-laws", "hungover", and "4:30AM". Are you trying to kill me?

glad you are back!

Merry Christmas, you. My husband and I are the same way in the car. He had the nerve to suggest that I take a DEFENSIVE DRIVING class (after I drove us to Philadelphia). Defend this, officer. Sheee-it.

language; it's a virus

...buckets of wine, dancing, puppies, hot tubbing, trying to steal someone's pants, being carried on someone's shoulder like a sack of monkeys, staying up to 6:00 a.m, waking up in an ill-fitting swimsuit, someone peeing their pants, teabagging.

Seriously, are you going to lift the entire plotline to "A Charlie Brown Christmas" and expect us not to notice?

Oh Whiskey- there is something that I have to tel you.

It is important and it is all true. Sort of.

I am like that in the car all. the. time. Seriously, if we didn't live in the no-car land of NYC, AS and I probably would have broken up years ago over my front-seat-control-freak-ness.

UGH. I had no idea what teabagging meant. Boys are weird.
Driving to divorce, I can relate. Although I never thought of myself as a control freak, just one who does not want to die in a fiery crash.
I love your, "What are you- drunk? Cause that's how you're driving, Drunky." That's great. My husband would screech to a halt and dump me out for that comment, but it would be so worth it.

The Kat always gets tense at me when I'm driving because I bird while driving ("but I cam see the road in my peripheral vision, honey! Yes, I saw that car I almost hit--I didn't hit it, did I? So there, see?!").

Soooo glad you're back!

i have a feeling we frequent some of the same parties. in other states.

(I actually asked TM this weekend, "Why do I eat MORE cookies when I'm mad at myself for eating cookies??" **Blank Stare**) We drove all weekend and we didn't even have to. That was fun!

"un-discombobulated": cool, haven't ever heard anyone else use that word besides me, thought I might have made it up even but no. just must have picked it up somewhere and it stuck.

I am the same way when it comes to driving. I got in the car once with my father-in-law and it was a BIG MISTAKE. I seriously thought my kids and I were gonna die! after that, I had anxiety attacks whenever anyone else would drive. I had to be in control or else. now I'm not nearly as bad but it has been like 10 years ago that I was traumatized by his driving and it took awhile for me to get over it. I still can be a shitty back seat driver though when I don't think the driver is careful or attentive enough.