The truth will set you free. Well...unless it lands you in the slammer, that is. 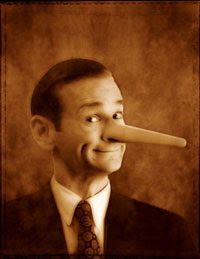 Fran loves my innocent, down-home, folksy anecdotes about my days as a country midwife in rural Iowa.

Not really. She just likes it when I lie.

So much so that she tagged me to give you seven "altered" statements about yours truly that may or may not be wholly truthful.


I'm a dirty stinking liar, therefore this works for me.

Being that it's Sunday and all, I thought I'd give you:

The Seven Deadly Sins of Whiskeymarie*, sponsored by the International Liquor and Wine Producers Association in conjunction with the Midwest Institute for Snack Food Engineering


Greed: I was once an avid collector of Garfield Merchandise. Oh, how I love that precocious little kitty and his hilarious antics! I attended trade fairs, swap meets and on-line auctions to fuel my habit. Within a year of starting, my collection had grown to the second-largest in the world. Mildred Virgeen of Grand rapids, MI had a slightly larger collection, and she possessed the crown jewel of Garfield-related memorabilia: The rare "Rappin' Gangsta Kitty" Beanie Baby. A production error caused 14 of these to be outfitted in a "Life ain't nothin' but bitches and hos" t-shirt. The company destroyed all but 3 of them. Mildred had one, and the other two were rumored to be locked in a vault on a remote island in the Pacific. My ill-planned & drunken attempt to steal Mildred's resulted in an 18-month stint at the Camp Brighton minimum security women's prison in lovely Michigan. Mildred has since obtained a permanent restraining order against me and I am forbidden from owning or even coming within 50 feet of any and all Garfield-related merchandise.

Gluttony: I once entered, and won a competitive eating contest. I entered the Carver County "Pork-o-Rama" sausage eating competition in 1997, following my brief stint in Europe as a sexual surrogate for uptight aristocracy with "mommy issues". I entered under the name "Kandi Kielbasa" and was nearly beaten by the contest's 6-time champion, Phillip St. Cheesesteak. We were in the final 30 seconds, with me in a distant second, when Mr. St. Cheesesteak was stricken with a rare but fatal condition known- in layman's terms- as "killer meat sweats". After being haunted by the bloated, greasy ghost of Mr. St. Cheesesteak every night for two months, I used half of my winnings to commission a bronze statue of our fallen hero that now sits in a quiet park in Eustis, Nebraska.

Lust: My torrid, on-again, off-again affair with Marky Mark (aka Mark Wahlberg) was the reason he and the Funky Bunch broke up. Ours was a sweaty, obsessive love. Our jealousy tore us apart. That and his total refusal to wear a shirt. Yeah baby, you look good, but it's Easter! C'mon! Grandma don't need none of those "Good Vibrations".

Sloth: I spent the better part of 1999 at home, on the couch watching reruns of "ALF" and "ALF: the Animated series" while working as a phone-sex operator by the name of Poontana. I gained approximately 565 pounds during this period and eventually had to be lifted out of my home with a crane and airlifted to the Minnesota Center for Dorito Addiction. I spent 9 months there where I learned to love baked Doritos and diet Yoo-hoo, and I weaned myself from totally implausible, alien-based, laugh-track accompanied television series.

Wrath: I am now a two-year chip holder from ABA, or Angry Bitches Anonymous. I first started attending meetings after an unfortunate incident involving "constructive criticism" from a co-worker, a can of bacon-flavored easy cheese and a pair of size-9 pumps. the "victim" agreed to drop the charges if I agreed to start seeking "help". I would have a 3-year chip, but I experienced a minor setback one year in when a grocery store clerk refused to accept my coupon for 25 cents-off of a can of butterbeans. Last I heard the clerk was walking normally again. This altercation was a violation of my plea agreement, and I served 80 hours community service cleaning the woods behind the rest stop on I-35.

Envy: In tenth grade I successfully planted a rumor that the school's homecoming queen, Cathie Johnsonandersonmaki, was working as a high-class call girl in the evenings. Cathie was dating Gary Neidermaarkenbrot, who I had been obsessed with since the third quarter of ninth grade. I doctored photos that made it appear as if Cathie was "entertaining" large groups of Japanese buisnessmen and local bigwigs and then pasted them around school. I was eventually caught when I had started impersonating Cathie, complete with a blonde wig and frighteningly dark tan, and trying to make out with Gary. Even though I was punished and sent to the St. Stalkerus home for wayward girls, Cathie never fully recovered from the humiliation and now works as a canner at the cat-food factory and lives with her 6 children (different baby-daddys) in Sunnyvale Trailer Park. Gary is now openly gay.

Pride: Today you see before you a professional ferret groomer. I currently use my talents as personal groomer to Twinkles, the current reigning king of the "Ferret Chow Cup", a yearly Ferret show held around the country at various Holiday Inn conference rooms. But this wasn't always the case. In the beginning, I wanted this, this...honor so badly that I wouldn't let on to anyone that I had never previously groomed ferrets. The first few years were full of heartache and tears as I paraded mangy ferret after mangy ferret in front of the judges. On one day in particular I refused to take advice from Terry Manlove, the top groomer in the country, to use non-toxic fur pomade on one of my clients. Once the rash subsided and an out-of-court settlement was reached, I swallowed my pride and started taking community ed classes to hone my skills. I am humbled and honored to work in this noble profession.

I know the last one is true as I saw you last Friday at PetSmart blowdrying that ferret.

Meat Sweats - you crack me up.

Do NOT use hair-straightener on your weasel. Common knowledge. Talk about a rash ...

Johnsonandersonmaki? How did you find out my last name?!?

Garfield? Of all the pussy I thought you'd be obsessed with, that was not the one I would have gone with. I mean it is orange and weirdly puffy, but hey. You can't go near it now anyway!

WhiskeyMarie, I have read so many of these in the past few days and with due respect to all the other funny ones, this is too too too absolutely fucking laugh my ass off until my stomach hurts funny.

Thank God I was not reading it in Starbucks or Panera, it would have been quite the spectacle to be laughing that loudly in public.

I must concur with Fran here. You make each and every one of TSDSoW look so appealing, I'm thinking I, for the first time ever, may take up sinning myself.

Oh Whiskey Von Liarpants - please note that you have been duly honored for your lie-a-bility!

My Name is Amy. And I am an Angry Bitch.

Actually, I don't know if I'm ready to give it up yet, but can you give me the number for when I am??

Happy new year to you!

Who knew that lying could be so funny? I think I'll give up telling the truth for 2008.

Woman, I prostrate myself before your awsomeness.

How could you even joke about being the Yoko that broke up the Funky Bunch? This will devastate the 3 remaining fans (worldwide) if they ever hear you having fun with their tragedy.

Oh Hell... You had me going until the Professional Ferret groomer, then some how the line between a lie and the truth got blurred. I’m left with this irreconcilable feeling that I no longer know what’s true or false. Having said that, I think I met Gary one night behind the rest stop on I35…

heheh, what a great laugh this morning!

"No ferrets were hurt in the writing of this post."

ha! have a safe and happy new year's eve!

Hiliarious WM! THanks for the laugh and have a Happy New Year.

My college boyfriend looked like Marky-Mark. Bod and all.
Sigh.
I'm now cursing myself for saying "no" to a 22-yr old proposal.

Now that rocks WM, well done and hilarious to boot.

That was inspired. I'll be laughing for several days.