Something to warm the cockles of your cockles.

I have nothing in the way of interesting anecdotes for you today. I am busy finishing up shopping, baking, cleaning, home dentistry and I would like to squeeze in one of my "Stripper Yoga/Prostitute Pilates" workouts today (I hear they're all the rage in Hollywood).

So I thought that instead of boring you with the comedy of errors that is my life, I thought I would tell you one of my favorite love stories ever. It has magic, intrigue, heartbreak and ultimately- happiness.

It is a classic tale of love, betrayal and redemption- not completely unlike "A night in the life of Jimmy Reardon" or "Cheerleader Camp".
If this doesn't bring a tear to your eye and a flutter to your heart- well, you're just not human.

On the wings of Penguins: A love story

Once upon a time there was a beautiful penguin named Olga. Olga was the nighttime bath attendant at the Russian massage parlor on 26th Street. She wasn't the prettiest girl that ever lived, but she was sweet as a bunny rabbit and had a gentle, fishy odor that one could describe as "pleasantly musky".
Olga loved her job dearly. But alas, something was missing. As much as she liked swabbing the backs of hairy Eastern European gentlemen, she longed to experience the kind of deep, meaningful love that she read about in books and saw in the movies. 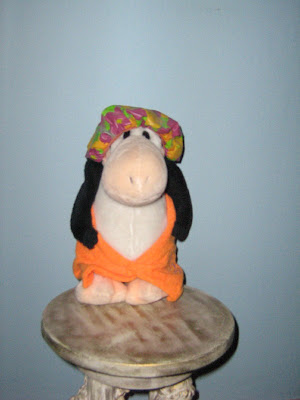 So one day Olga took out a personal ad. "Short, slippery girl, 37, in search of true love seeks knight in shining armor to sweep me off my feet and dazzle me with adoration. Must be employed, 35-67, and have own bus pass. Polar bears or descendants thereof need not apply."

The next day, much to her surprise, Olga received an answer!

"Hello, Olga! My name is Garth. I am 46 years old and I am currently employed as a chef down at Paddywhack's House of Fish and Squid on Route 33. I am the proud owner of a 1984 Yugo which I would be honored to pick you up in Friday night for dinner and drinks." 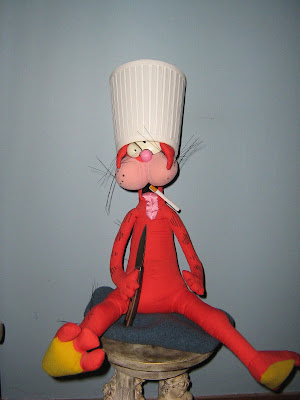 Olga's heart leapt with joy. A date! Me! I am the happiest girl in the whole world!

She put on her finest sarong and donned a flirty hat when the day finally arrived. She had butterflies in her stomach (or was that the spaghettio's?) and dreams of happily ever after in her head.
He was even handsomer in person, she thought. So tall, so lanky, so cultured!
Garth brought her to the finest low-to-mid-priced supper club in town- the Bucket of Beef.
Olga felt lightheaded as Garth ordered a bottle of Cold Duck for the two of them, but she was too nervous to drink. Luckily Garth was thirsty and he happily finished off the bottle during the course of dinner.
They dined on the finest cheeses, fish and fruits. Olga was in heaven. 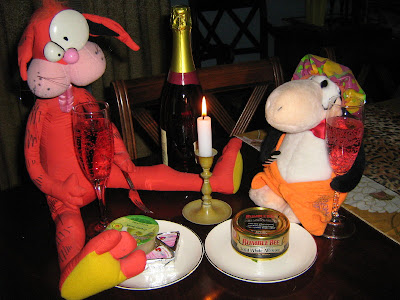 Olga had to excuse herself to the ladies room to tidy up her makeup and vomit. The excitement was simply too much for her.
While she was gone, Garth kept himself busy. Olga was gone nearly a half hour, composing herself and gargling, but Garth barely even noticed. 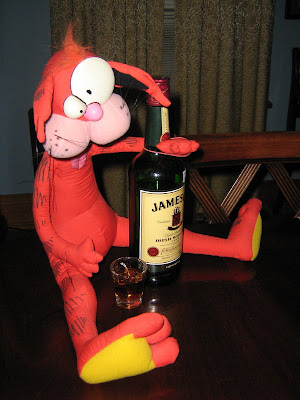 Later, before they left the restaurant, Garth needed to take a trip to "freshen up" himself. 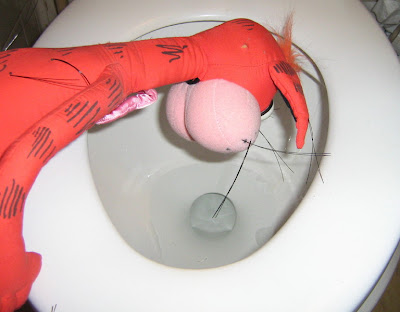 Neither Olga nor Garth wanted the evening to end, so they decided to meet a few acquaintances of Garth's at Drunky McSexypants, the new hip lounge in the cities "Pork District".
Bruce and Hefferina knew Garth from high school in rural Saskatchewan. Bruce was now a manager for a struggling theater troupe and a minor television personality. Hefferina was the ex-trophy wife of Duke Crackerputz, the local underpants baron. Hefferina liked to party all the time.

They all settled into one of the cozy couches and had a few cocktails and some conversation. As the evening progressed, it became clear to Olga that Garth and Hefferina were doing some serious flirting. She started to pout, and Bruce put his arm around her shoulder to console her. 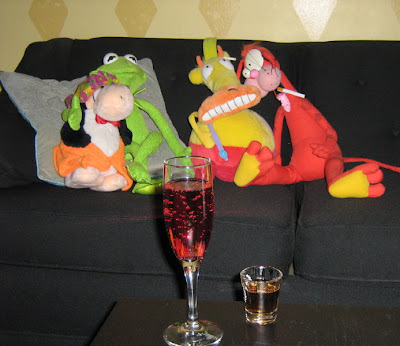 She and Bruce started talking and talking- they had so much in common! Before she knew it, Garth and Hefferina had disappeared.
Olga was furious at Garth for wandering off, but they WERE on a date after all, so she decided to go and look for him.
Imagine her surprise when she went into one of the lounge's "Snuggle Pits" and saw Garth and Hefferina in a most uncompromising position! 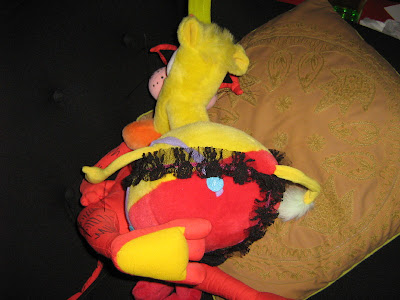 That was it.
Olga stormed back to Bruce and asked him for a ride home. He happily obliged, as he was quickly falling for Olga's fishy sweetness. The pungent herring odor was captivating in an inexplicable way. He drove her home, and before she got out of the car, Olga boldly kissed Bruce- right on the lips! It was magical and from that moment on they knew this was the real deal- they were in love.

The next six months were a whirlwind romance filled with flowers, candlelit dinners, fish fries, picnics, movies and much kissing. On Valentine's day Bruce proposed to Olga and they were married in a beautiful evening ceremony. The bride wore Vera Wangly, a little tissue-weight number with a matching veil. The groom sported a Calvin Kleenly silk tie. The honeymoon was an Antarctic Cruise followed by three days at a riverboat casino in Iowa.

They lived happily ever after. 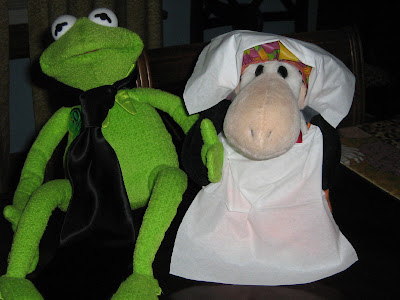 What happened to Garth, you ask?
Well, he accidentally impregnated Hefferina that fateful evening in the "Snuggle Pit", and when he showed up at work the next day still whiskey drunk from the night before he was fired.

Paying Hefferina child support, coupled with alimony and child support he owed to his first wife- well, he was broke. The stress drove him to drink cheap hobo wine under the freeway overpass with his hobo buddies day after day.
He died a year later in an unfortunate "drank too much and fell off a chair into the path of an oncoming segway" accident. 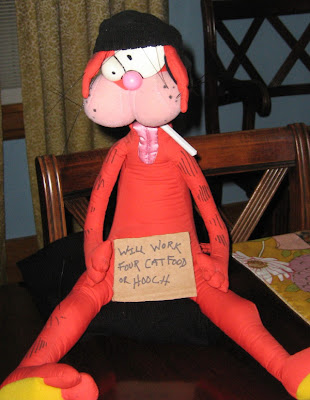 The end.
Posted by Whiskeymarie at 1:28 PM

You slay me. Your creativity keeps me captive in awe.

Awww...Olga and Bruce make a lovely couple. I hate to picture their babies, though. ;)

That just bring tears to my eyes. Olgo looked so beautiful in her dress. Bruce looks a lot like Kermit. I wonder if it is Kermit in the "Witness Protection Program". Oh geez, I hope you haven't outed him!

So was Garth drinking Thunderbird, Night Train, Irish Rose, or some good ol' Mad Dog? Cause all three are alright with me. I just wanted to know which I should pour onto the curb for a homie.

you should write dirty childrens books.

F- Irish rose. Only the best for Garth.

Lol- I kind of thought so when he mentioned "That lollie girl" that "broke his heart".

C- Are you offering me a book deal? Cause I think that there is a million-dollar idea. I do think we'll need a good lawyer, though.

Oh My God... you have Opus and Bill the Cat dolls? This does not surprise me. This is why you may quite possibly be the Jewel Of My Blogroll. (Please don't tell the other blogs).

P.S. I went to high school with a Drunky McSexypants. I'm glad to hear he opened his own business. We kind of lost touch.

Oh dear. This was quite the hilarious adventure. How do you come up with this stuff?! Girl, you have some weird stuff goin' on in that noggin. ;) Weird in a good kind of way! Thanks for making me shudder in an attempt to stifle my laughter when I should have been working. It's a good thing I keep napkins in my drawer to dot my watering eyes with.

Loved it. Thanks for making me laugh.

HOLY LORD. Where do you come up with this stuff?!

That was genius, the morality play obviously isn't dead. I shudder to think what you could do if you had some free time.

i tell you -- those writers should stay on strike and we should bring you in to write for Leno or those awful sitcoms.

happy holidays to someone who always makes me smile

I was moved beyond words.

OK, not really except for the laughing part.

fabulous -- a love story for the ages...

it would also make a wonderful movie staring Leo DiCaprio and Kate Winslet ;)...and maybe Patrick Swayze or David Hasselholf as Garth?

I love the pictures!

I love how your brain works! Oh. Mah. Gawd.

Best wishes to you and the Mister for a happy xmas!!

Although I have to admit you had me at Jimmy Reardon.

LOL, that was just too damn funny WM.

Merry christmas to you and to your family!

the amount of time you took to stage that elaborate and touching tale probably could have been put to better use solving the mideast crisis.

and everyone knows bruce is gay.

There is nothing hotter than a little stuffed animal action to warm my cockles ;)

I need me some Whiskey!

That snuggle pit scene left nothing to the imigination. I am psychologically scarred now.