But it already came true...

Sunday is my Sister-in-law's b-day. happy b-day Maurey!
Summer seems to be the "birthday season" with my family and friends. I love birthdays. Not just my own (though I do so love presents. Not to be greedy, but I would like to initiate the concept of 'conception day' just to make things interesting. Think about it, that's all I'm asking. Although, this will make for some very awkward conversations with the parents. Just think about it- and if you have time to sign my petition that would be great.), and where the hell was I..? Oh yeah, birthdays. 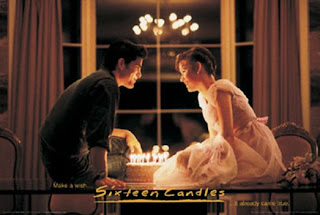 Whenever my own birthday rolls around I inevitably think of Sixteen Candles. I can't help it.
Oh sweet Jake, you set the bar so high.
Every birthday should have that magic.
Come to think of it, every girl should have a Jake Ryan. Meow.


Today, because my mind often randomly turns to things like spider monkeys and string theory, I wondered...

Where would Jake and Samantha be now?
What if they got married and lived happily ever til' now?

Would the magic still be there?

Let's take a peek, shall we?
Come along, my little bon bons...

Molly Ringwald as kooky Samantha and Michael Schoeffling as our favorite heartthrob Jake in...

(opening scene. Enter to: a mid-to-upper class suburban Chicago kitchen. "Sam" rushes around, looking for something. "Jake" sits at the table, reading the paper, eating a doughnut and drinking coffee)

Sam: "Where the hell did you put Jake Jr's permission slip? Is that a doughnut?"

Jake: "Yes it's a freaking doughnut. I didn't have the slip in the first place. Why don't you check that $400 suitcase you call a purse?"

Sam: "You gave me that purse! If you thought it was too expensive you shouldn't have bought it in the first place. Whatever. Where the hell is the slip?"

Jake: (muffled by chewing) "Check the pile on the dining room table. It's where you leave everything else."

Sam: (looking in the other room) "Here it is. Finally." (hollering) "Jake Junior! Samilita! Hurry up or you'll miss the bus!" (turns to Jake) "You know, Samilita's junior prom is coming up. I'm going to have to take her to buy a dress if that boy she likes asks her."

Jake: "You mean that guy Drake? His family is loaded. Let's hope that one works out." (winks)

Sam: "Jesus christ, Jake- she's only seventeen. Just because you and I got married when we were eighteen doesn't mean she has to."

Jake: "Oh, here we go again." (mocking in a high-pitched voice) "You got me pregnant, you did this to me, you ruined my chances of going to college on that art scholarship, blah, blah, blah."

Jake: "I seem to remember that there were two of us on that dining room table that night. Remember? We cracked the top, if I remember correctly. Man, my Mom was pissed about that one."

Sam: "Yes, of course I remember. How could I forget? It took 20 minutes to get that taffeta nightmare of a dress off. Remember what you said? You said you had control, that we didn't need a condom. Look how that worked out."

Jake: "Speaking of which, someone has a birthday tomorrow..."

Sam: "Good one, big guy. With that spare tire of yours we'd probably end up with a broken table and nasty splinters. How about you try coming up with something more original than that tired old schtick? Seventeen years ago that worked- not so much anymore dear. Give it up already."

Jake: "Fine." (mumbles something about hoity-toity and wishing he married the money-grubbing blonde)

Sam: "Let's just have some people over for a barbecue on Saturday. Farmer Ted and his wife, My sister and that new husband of hers- what's his name again? Mario? Flavio? Shit. After 5 of them I can't remember anymore. At least this one isn't in prison already, which is a good thing. Let's just make sure we hide my jewelery, you know?"

Jake: "How about your brother? We haven't seen him in a while. Probably not since your parents, you know...died."

Sam: "Until the police officially clear him of the charges he's not setting foot in this house. I know in some states euthanasia is legal, but it isn't here. Plus I don't like how he tries to get Samilita to sit on his lap all the time."

Sam: "This should be fun. Just try to, you know...watch your drinking. I don't want a repeat of the Henderson's barbecue last summer."

Jake: "What? Christ, you slap one gigantic broad in the ass and you never hear the end of it. Jesus!"

Sam: "It was funny! It was! It's just that now Janey Henderson won't speak to me. It makes PTA meetings kind of awkward. But it was funny. Really funny. I love the way she squealed and dropped her plate. Classic."

Jake: "Yeah, that was funny. That's what I love most about you, Sam. You get me after all these years."

This is the reason they never had a sequel. It's sad but true, with a first date like theirs, there was nowhere to go but down.

OMG, I'm rollin' that you wrote out the whole "Sixteen Candles 07" scene.

Jake did set the bar high didn't he ? After I saw that movie I just wish, hoped and prayed that I'd have a birthday that good where the hunky senior would decide he loved me and spend my b'day with me.

Shame, shame on me—I never saw the movie. I think it was just a little before my coming-of-age time.

However, I can appreciate good dialogue anyway.

Maurey- get the to thy video store and get this A.S.A.P.

I had to delurk to say THAT... was hilarious. I would SO go see "35 Candles" in a heartbeat.

I own the collection of John Hughes movies that came in a cool "binder".

Did you know that the guy who played Jake is a carpenter now. He has a business building furniture or something...gotta love VH-1 for supplying us with the "Where are they now" info.

After that flick, I think I may have spent a full year trying to perfect dragging my top teeth on the bottom right hand side of my lip ala Samantha in her "I'm having sexy thoughts about Jake" moments. (Are you trying it right now??!)

I almost cried when you wrote about Late Jake's Tummy Tire. It's like imagining Eric Stoltz's Some Kind of Wonderful Hair with a Balding Late 30s Comb Over. Sacrilege!

Hey, you should do a version of Breakfast Club Reunion: Back in Detention.

Your new bangs are Bitchin' Aces!

you know that jake is a carpenter now, right? totally crushes me! though, i often think about hiring him to refinish my cabinets....among other things....

awww...samalita and jake jr - how gorgeous!!!!!(This almost, accidentally, came out as grotesque)

with all your newfound contaceptive wisdom you should be able to give young samalita some welcome advice...so she doesn't end up following in mummy's footsteps!

"No yanky my wanky! The Donger need food!"

That was hilarious. Thanks. :)