Maybe next I'll see if Matlock is on... 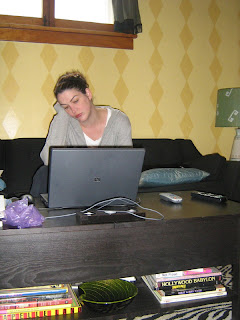 This is pretty much what I've been doing all. day. long.

If any of you remember, we had a slight problem with our chimney a while back. Mostly, it was crumbling from the inside, spewing what I can only assume was asbestos-laden debris into our basement loudly every once in a while in what can best be described as "chimney farts". Basically, our chimney was dying a slow death that, based upon initial estimates, was going to cost us roughly around $5-6000.

Well, lucky for us we're procrastinators. We waited to fix it. And waited, and waited...
We waited so long that we decided to get a new estimate from someone else.
Today the chimney boys are fixing it in a much less invasive manner than previously discussed, and it is only costing us $1100.
(clinks glasses) Here's to procrastination!

But, if you've ever had a major repair done to your house, you know that the process can suck up an entire day, week, month or year. Today is that day for me. I can't really start any projects as I have to keep an eye out for the repair guys (they have been coming and going all day to allow certain substances drying time), I have to wrangle the cats into the front porch when they do come (pauses, gets up to open door for returning fix-it dudes), I have to be around to answer questions, and I have to monitor to make sure none of them accidentally come in through the front door and let the cats out.
So I've been sitting here at the computer (also watching TV) since 9:30-ish this morning. 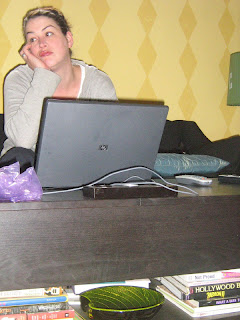 Man, I really need better cable- super duper ultra basic just doesn't cut it when you're sitting here for HOURS. Not that I don't appreciate a good Hallmark Channel movie, but...


If I'm still sitting here 6 hours from now poke me with a stick to make sure I'm not in a coma.

If I'm still here tomorrow send help. And magazines. And pudding. I like pudding.
Posted by Whiskeymarie at 3:14 PM

I have a cat door to the basement. It was the clincher when we sold our house to the lady we affectionately refer to as the dirty bitch. Unfortunately for us, she reneged on the deal AFTER she allowed her cats to use our entire basement as their own personal crap kingdoms. GROSS.

To keep busy all those hours did you put blonde highlights in your hair?

Glad the repair was much cheaper than you were first quoted.........

That's odd- I DO look like I have really badly done blonde highlights. I think it's from the sun shining in the window over the couch. That, or the grays are winning the war.
(looks in mirror to check)
Nope. Still brunette, lucky me.

Thanks for the b-day wishes!!! Wanna meet @ Grand Old Day on Sunday? Stroll around, gawk @ peeps and drink?!? ;)

(but I'm sure you figured that out)

My boss is a slave driver and of all things has given me more work to do...thus I'm not stopping by as frequently as i'd like.
That said, please do not post as frequently I hate to miss out.
Oh wait, that's kind of selfish.
Why don't you just send me lots of liquor and I'll just drown my sorrows.
then you can post as much as you want and we'll both be happy.

I'm pretty sure "Charmed" was a joke someone was playing on all of us.

A quick google search reveals that it somehow lasted eight whole years, like other atrocities such as the Revolutionary War and China's conflict with Japan during World War II.

Hey, we have a cat door leading from one room to a bathroom.......seriously. Everyone thinks we are weird, so I TOTALLY get the inside cat door.

i have a cat door in my TV room door. of course my rolling craft suitcase sits in front of it to block it because moo is an indoor kitty.

yay for your cheap chimney repairs!

The one time I had to stay home while repairmen were here. I apparently fell asleep on the couch and when I woke up they had left for the day. Ooops...my bad.

Have you ever seen me in a big, utility MAN belt? I'm pretty sure I keep pudding in one of them thar pouches. ; )

Couldn't go to sleep without my Whiskey fix. Love from south of the Mason Dixon. : )

I love that waiting worked out for you financially. But the things that you learned...I have the same problem with Charmed. I can't ever turn it off but it is really, really bad. I think it's alittle different for me, because I have a crush on Alissa. And yesterday was my Law & Order marathon. I did actually go outside golf, see a movie and then right back in front of the t.v. for more Law & Order.

I think any time of day is ok to eat leftover pizza. Especially for breakfast.

Hey renaissance woman- since you watched the whole marathon yesterday, did you get the verdict on the three-parter about the female Hollywood executive that got murdered? I seriously watched 2.5 hours of it, then I got involved in a project & missed the end.

I can't decide if this is completely nerdy or just really sad that I need this information.

John- 'Man-belt" is hilarious. I'm pretty sure our 50-something paunchy and overly-friendly-in-an-odd-way chimney guy had one on.
No pudding though.
:(

I was going to bring you some pudding, but I ate it all on the walk from the store, so I went back, but then I ate all that pudding, went...

Long story short, I'm in a diabetic coma and it's all your fault.

We have a cat door to our basement. When we first moved in, there was actually just a hole in the wall, about as high as my shoulder. Our three cats would just jump up to go to the basement, but then we got an older cat (from Walmart no less), so we put in a cat door for him.

Also, it IS perfectly ok to eat leftover pizza at 11 a.m.

I highly recommend it actually.

Poking you with a very LONG stick (from the eastcoast). Are you still there? Should I start packing boxes of pudding to send to you?

Hope the bordom did not suck the life out of you.

When I hear people talk about their home repair costs, it makes me smile that I am a loser in my 30's still throwing away my money on rent and a maintenance guy that comes with that rental fee.

Well, are any of the chimney guys cute?

One of the first things I did when I moved into this house was install a cat door to the basement. It's the best thing.

I, too, have been trapped at home for days. Stomach flu. Boo hoo.

You know, you could be cleaning yesterday's eyesores . . . I'll shut up now.

Nothing significant to add but you just reminded me that I'm fresh out of pudding. My afternoon snack is shot to hell.

I have a cat door to my laundry room, which is in the basement. (Well, I call it a basement. Most people call it the "downstairs.") I like her to have somewhere to run to when little people or our future dog are after her. :)

Tapioca is my favorite.

That guy is not nearly cute enough to justify watching Charmed.

I am married to one of those guys that does repairs, showing his man crack and dawning his man-belt. I'll sneak a picture of one or the other one day. Then, you'll all be jealous.

I thought you had highlights too. I'm glad you clarified that. I was worried.

seriously, what were they doing singing instead of working?

i'm such a slave driver!

leftover pizza is only good with reruns of Buffy, not charmed

I always enjoyed Charmed until Shannon Doherty left - then I hated it. She kept that show together, man!
Where is she anyways?

Okay for like a month I have been telling the steps about this show on TNT that had three witches...they thought I was joking.

Thanks WM for providing a service to those of us with early-onset dementia.

I also forgot Cameren(sp?) Diaz's name today when I saw a clip of the Laker's game. I seriously need some help.

BTW: HOW did you put those cool diamond's on the wall?

OMG, I have a cat door to my basement! Also, singing chimney guys = awesome.