That was the day Wilbur T. Frupenfartz thanked his lucky stars that he chose "truth" at the geriatric slumber party 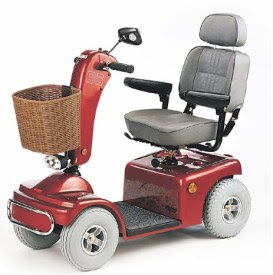 Traffic was a real bitch this morning. Think 5mph. Yup. And for once I actually had somewhere to be that didn't involve a couch and my ass.

It wasn't congested for the reason you think. The Hot Wheels style reconfiguration of our Twin Cities freeways due to the bridge collapsing was not the culprit here.
Nope.

It was, in fact, an elderly gentleman of questionable mental clarity wearing a purple hunting hat while riding a shiny red Hoveround. No lie. It had one of those orange safety flags attached to the seat.
At least he took a little precaution, I guess. Kind of like wearing a helmet when you jump out a plane without a parachute, but hey- I guess he's just a risk-taker like that.

He had somehow managed to make it onto I-35E with it (which, let me tell you- isn't always easy in a car, never mind a shiny red motorized wheelchair) and was cruising at "top speed", possibly to get to Denny's in Maplewood for the Grand Slam breakfast- or, possibly not. He wasn't on the shoulder either- he was in the right lane- I can only assume he thought he was driving his 1965 Chevy- cruising for tail and looking for a drag race.

Nonetheless, there were 3 state patrol cars (one in front, two following) giving crazy grandpa a mighty fine police escort. It took FIFTEEN MINUTES to go 1/2 mile. Grandpa probably thought it was a parade in his honor for kicking Mildred's ass at "bingo for meds" on Sunday.
Once off the freeway (this happened to be the exit I was taking), I passed the guy, now parked on the side of the road and getting a seriously stern talking-to from the Popo.

He had the biggest grin on his face.

Like he had taken a dare and kicked the shit out of it.

Good for you, crazy Hoveround dude.

Good for you.
Posted by Whiskeymarie at 5:09 PM

Thanks to your post I now have spit on my computer screen. Thanks for making me hork today :)

That is AWESOME. I thought that stuff only happened in Iowa, where old men drive around on their lawn mowers. Although not on the freeway. I'm glad you survived the experience -- I would have gone nuts.

So, it was worth the wait, then?

How crazy...I wonder if that will make the news. Oh, wait, I forgot, the only thing they're allowed to talk about on the news is the bridge. Hmph.

I saw a guy today roaring down I-95 on a crotch-rockety type motorcycle...with a bicycle helmet on. Umm, can we just say goodbye to your coconut right now? If you go down bud, that "headgear" is going to about as useful as a hulled out grapefruit.

ps - word verification: uwajmn.
Too right, I was jammin'!

That's about the funniest damn thing I've ever heard. I hope when I'm geezin' I finally get up the guts to do crazy stuff like that. I'd like to do it now, but I'm afraid I'm one stunt away from being committed as it is.
Stacie

You know what? That old dude kicks all kinds of ass. Hilarious.

Just think how long he must have been on the road for 3 state troopers to catch up with him! He was probably visiting from Mason City, Iowa.

I may want to make this a Children's Book. I'll draw the pretty pictures, you write the inspirational words. Just as long as it has that title.

Because that? Is awesome.

I hope I dothat stuff when I get older. That dude rocks hard.

That is truly awesome. I hope I rock that hard when I get my Hoveround. Which, truthfully, I've been wanting for a while. Walking is so much work--I want to roll! I don't see why only the old folks get 'em. ;)

Mad props to the old dude. What the hell are they going to do to him? Toss him in jail?

And sort of in response to H, there's a movie called The Straight Story about a guy from Iowa traveling to Wisconsin to see his brother, via lawnmower. Based on a true story, of course!

Not to ruin the fun spirit here, but I thought the story was sad. Especially when you said he was all smiles. He may have been an Alzheimer's patient who left the facility and was very confused. I'm glad they got him off the highway safely. (I know, I KNOW, I'm a downer...)

and the only thing funnier than what he did is your oh clever post title.

I felt bad for the dude too. I guess I try to find the humor in what situations I can.
Otherwise it's all too depressing.

But yeah, that poor guy needs better family and caretakers, that much is for sure.
But it is kind of funny, still.

I think that may be the best title for a post. Ever.

I agree with everyone that this is very sad and that we probably shouldn't laugh, but honestly I did. And the funniest thing was the fact that he got a police escort. I mean really if I was an old dude on a hoverround and I had a police escort, I would think I was hot shit. The other thing that scares me though is, how many other idiots are going to see this and think it is a great idea and decide to ride their hoverround or lawnmower on the highway.

This is hilarious! I think the detail about the little orange flag had me laughing the most.