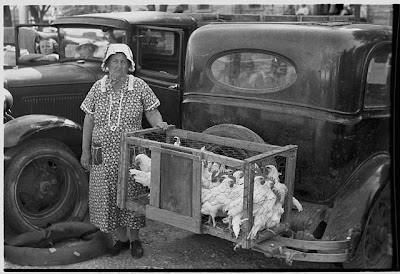 It's time I introduced you all to someone.

Her name is Esther, and she's the cranky old lady that lives inside me.

Here she is with her chickens.
She loves those chickens.

Esther doesn't make a lot of appearances as she's 89, arthritic, and tired from eviscerating poultry all day.

But it's not chicken killin' season right now, and Esther has been making quite a nuisance of herself lately, what with all the free time on her hands and all. She doesn't know how to knit, her family dropped her off at the nursing home years ago without as much as a phone number, and the other old ladies don't like when she takes her teeth out at the dinner table, so they won't play canasta with her anymore.
She's got nothing better to do than to sit around, drinking coffee (that smells suspiciously of Jim Beam), eating goulash and telling me what to do.

Today, as an example: Esther tagged along with me for eight hours of in-service meetings, "breakout sessions" and, well... more meetings. I couldn't get her to sit still for more than two minutes at a time (peeing from all the coffee), and my coworkers seemed a little annoyed when she kept sticking her tongue out and going "pffffthhhttt" out of boredom. I attempted to distract her with shiny things while I tried to get some work done, but she kept poking me in the sternum with her bony little finger while she repeated "I'm bored" over, and over, and over, and over...
Until I slapped her.
Probably shouldn't have done that as it just pissed her off. Now she's pouting in the corner. And I couldn't take her to the bowling alley today either, because of work. I also had to cancel for our water aerobics class for tomorrow morning (again, work). Last I checked, she was making a needlepoint pillow cover that looked like a depiction of me being eaten by wolves, but I can't be sure. She's really not a very good "needlepointer".

Esther hates being told no. Well, that and being slapped, I guess. 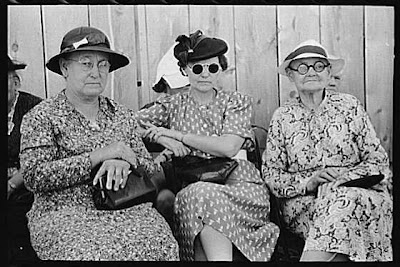 This is Esther (middle) and her friends.
Don't they look like they're having fun?

Esther hasn't seen her friends for a while, as I have been busy and couldn't drive her to Shady Acres to visit. I told her to take the bus, but she thinks you can catch "the herpes" from bus seats, and no amount of evidence to the contrary is going to get Esther's saggy bottom on a bus.

I promised to take her to visit them tomorrow afternoon. I said I would sneak out of my meetings and drive her to the VFW to meet Mecca and Stacy.
Esther is very excited. I rarely let her have any fun anymore as I'm busy and quite frankly I don't like the old lady smell too much. Esther smells like lavender and sauerkraut with a touch of Gold Bond medicated powder. I have trouble washing it out of my clothes sometimes.

Other that a screening of "The Grapes of Superbad", Esther didn't have much fun this weekend either. She toiled in the kitchen in the basement of St. Purgatory's Catholic Church, cooking for the yearly "Celebration of toast" festival. White, rye, wheat...she slaved all weekend cooking up tons of toast. She didn't even have time to write anything for her chicken enthusiast blog.
Poor old girl.
But, the toast festival went beautifully, and luckily no one noticed that Esther had slipped upstairs and drank all of the communion wine. I figured it out when she called Mabel McPriss a "fucking cunt". I decided it was time to take her home, put a few vicodin in her and put her to sleep.

Alas, my dear Esther, I am growing weary of your company. I think you need to go back to the home for a bit- they have that pureed cheeseburger thingy you like so much and I don't know how to make it the right way (I figured that out last time I tried and you threw it at me. How was I to know you like your cheeseburgers with velveeta? Huh?).

I need a break, Esther. You aren't much fun to be around. 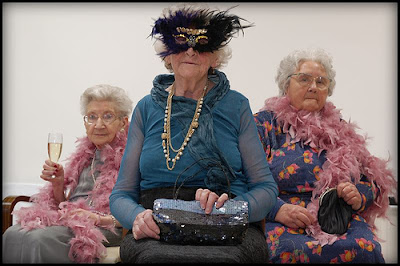 How's about you send your sister Lola over?
I love Lola.
Lola knows how to have a good time.

Lola knows how to party.

Perhaps you know her?

She used to be a showgirl.

But that was thirty (or fifty) years ago...
Posted by Whiskeymarie at 5:42 PM

mmm Esther sounds adorable. Particularly the souerkraut combined with lavender smell of her...

Ahhhh Esther, she reminds me of my maternal grandma. The one I took to a fast food restaurant for the very first time and she griped throughout the entire experience about having to order her meal from a counter, carry it all the way to a table on a tray and then horrors, throw away the trash herself, "Just what are these people getting paid to do... Stand around and watch ME work?"
Good times, good times... Nasty old bitch!

I may be related to Esther or at least to the crazy Southern wing of her family.

Ah! I was hoping that link was to Barry Manilow! Yes! You do not disappoint.
What a hysterical post. I never really thought of getting in touch with the cranky spinster inside me before. But I know she's in there. She surfaces ALL THE TIME.

Esther sounds like good company to me, I'm sure she keeps you busy; that's for sure.

Hey, where'd you get a picture of me on the left with Lola? Of course that was pre-contact lenses and pre-catheterization. You should've slapped Esther a couple of times.

Her presence tends to scare off my inner cleaning lady, Geneva, so I hope she goes away soon. I need Geneva to dust. And maybe wax the floors.

I think Dave & I toured Esther's old house last week. Does she collect antique creamer sets disguised as cows? Does she try to cover her saurkraut/lavender smell with too much Charlie cologne? Then it was definitely Esther's old love shack.

Thank you for making me smile today. I am laid down with a cold and feeling like balls, but you made my morning.

I have an inner Ester. She hits everyone over the head with her purse if she doesn't like them. lately, she doens't like many at all..

That's so interesting--I have an inner bone-in-the-nose native. His name is Kwango, and he is just such a handful. I was thinking of introducing him on the blog.

Esther, before you go back to the home, pour Great Aunt Gertie somma that Jim Beam.
This crappy Seattle "summer" is makin' my joints ache.

I think we all have a little Esther in us.

Those are some great pictures, especially that last one.

Oh mah goodness. I'm not sure how I missed this the first time around--so glad Jenn in Holland sent me here. And congrats on the perfect post award!!!

Maybe you could send Esther over to hang out with Mildred, the nasty old biddy that lives inside of me. She's been plaguing me for ages and she's only getting more crotchety as the years go by.

Who knows, they might get so distracted playing Chinese Checkers that we could give them the slip for a while?!