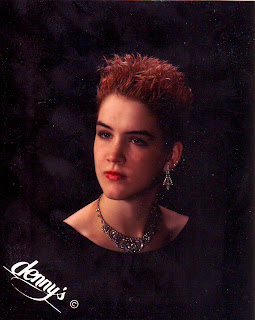 My (ahem) 20-year reunion is coming up this summer.

I'm dropping the envelope in the mail today with my check for $25 (yes, the dinner Saturday night really is going to cost just $25- we aren't exactly the fanciest folks), but I'm not sure that I'm actually going to go.

I went to a small school (my graduating class hovered around 60-70 people), so we all actually know one another, and Facebook has recently turned into a mini-reunion of sorts. I am now "friends" with about half of my class, including my sixth grade boyfriend and one of the guys that drunkenly agreed to be spanked at the 10-year. Good times.

The thing is, I went to my 10 and 15-year reunions and holy hell, they were FUN. Both times, we all hung out at one of the local bars (you know, the ones where the divorced teachers from high school hang out at, occasionally hitting on former students, thereby ending up as conversational fodder for us at the reunions and completing the circle of life?), got wasted and whooped it up. Minor nudity, karaoke, kissing, gossip and late-night food at a truck stop may or may not have been involved. No arrests were made, and no one went to the ER, so they both were a resounding success.

But I'm not sure about this one. For one thing, the very act of going acknowledges that I am old enough to be going to my 20-freaking-year reunion. Yuk. I don't feel that old and I don't think I look that old, so why rub my own nose in it? Jesus, I now regularly have students that were born in 1989, never mind that I had already said goodbye to my virginity, totaled a car, smoked my first doobie, committed several John Hughes movies to memory, and officially "became an adult" by that date. I feel like this would be the starting point where we begin marking our time spent together by how many divorces, illnesses, deaths and bankruptcies have passed since we last met. Kind of like my having a conversation with my grandparents, minus the guilt.

...it could be fun. At the very least I'd get a doozy of a blog post about it, right? Hmmm...I wonder if we could get anyone to take off their pants?

It's next month- I'll keep you posted.

XO
Posted by Whiskeymarie at 10:04 AM

You look young and beautiful. And I think you feel young and beautiful...all good reasons to go so far, right? - I had a BLAST at my 20-year, and I know you will too. How can everyone else have fun, if the life of the party (ahem...YOU) isn't there? As for our class (and I've heard other people say this same thing), there's something special about the 20-year. You're far enough down the road that all the cliquey nonsense just falls away.

My graduating class was about 200. At my ten year, this one girl was so offended that I didn't remember her. I remembered her husband, who was in my first period class freshman year. I never had a class with her. She wasn't in drama club or on student council or anything. I was, plus I did the morning announcements on TV and was elected to homecoming court Junior year (which is the greatest Sally Field moment of my life thus far). So it's not surprising she remembered me as I was kinda visible (though I never felt cool or popular) but she was all bent out of shape because she remembered me and I didn't remember her. Well, I remember her now. Should we meet up at our 20th, I'll definitely know who I'm saying hello to. But I still don't remember her from high school.

I think you should go. It'll be way funner if you do. What's a party without Whiskey?

It's not your age, it's how you live it, Whiskey.

And your nose is different - prettier, I think - than in your senior photo.

What's up with the mindset that the onset of adulthood (and then becoming something like a grownup) is a bad thing?

Yeah, being responsible for yourself can be harsh. But being free to party without all that weirdo teenage angst?

It's totally worth it!

The day I graduated high school, I flipped those effers the bird and never looked back. Facebook is the only reunion this girl is going to. My 10 year reunion invitation came in the mail and was immediately recycled. If you go, be sure to take pictures, and maybe watch Grosse Pointe Blank first.

I went to my tenth and had a blast but felt the same way you do about the 20th and didn't go. It didn't help that the weekend it happened we were in the process of moving, but I'm sure I could've fit it in somehow.
I think you'd have fun, but maybe wait until it gets close to the time and see how you feel then. In the right mood, ANYTHING can be fun. Conversely, the wrong mood can make anything really shitty. At least that's how it works with me.

John- I DO feel young! I think that's why it's so hard for me to fathom that I'm already at the 20-year point. I know I'm not old, it's just that stuff like this...
XOXO

Red- Even with my small class, there are still a few that I totally don't remember AT ALL. I don't know if that says more about me, or them.

gloria- I love you- you're like my kick-ass, take no prisoners sister that mom had to sell for cigarette money. And you are right- totally right- maybe this "older" thing ain't so bad after all.
And on a related note: Oddly enough- I get compliments on my nose all the time lately, which never happened when I was younger. I know our noses get bigger as we age, so I guess I'm grateful that I'm "growing" in a good way.
;)

Melissavina- If I go, I promise I will take LOTS of pictures.

Kim- That's why I sent the check in- then I can decide the day of, if I feel like it.

$25? For a little more, you could just hire someone to pose as you and take notes.

I am of no help here. Because seriously you couldn't get me to my high school reunion if you paid me money.

Well scratch that...it depends on how much.

But yeah when I'm hiring people born in 1990 and I'm think crap I graduated H.S. that year it kinda does a number on my head.
Then I snap out of it and realize I have only gotten more badass with age.

But this is a high school reunion, right? Girl, I'm on my 20th COLLEGE reunion.

At least you're thin and atractive.

Unlike some of the slobs you'll see there.

Going to reunions is a slippery slope - first ya go to one and kinda like it, so you go to the next one and after that you start feelin' the pressure to go to all the rest.

So,go ahead, wear your name tag and try to remember stuff so you can retell all those cute stories at your 40th reunion.

I went to one - it totally sucked. Nevermore.

easy solution. since i am SHOCKED that you're that old, it means that you're NOT that old. therefore, you can go, your young self, and have a blast!

seriously. you're not that old. and that says a lot, coming from someone as VERY YOUNG as me!

i'd totally hang out with you.

You had fun at the other two you attended, right? I bet you'll have a blast at this one. Go. Drink. Be you. Enjoy. And if it sucks, get even more drunk and liven up that party and then puke on the floor and leave! Or leave early and sober, your choice, really. (But that would just prove you're getting old, haha...)

20 for you, 15 for me. Thank goodness the people on the reunion committee didn't think it necessary to celebrate our 15th. I wouldn't have gone. But 20? I've only heard good things about th 20th.

I avoided my five-year high school reunion like the plague. There were 400 or so people in my graduating class, with about 25 (max) that showed up for it. I'm proud of that fact -- in two years I will proudly avoid my ten-year reunion as well.

Most of us actually keep in contact with those friends we wanted to keep in our lives, whether it's five years down the road or -- like you -- twenty.

you have to go! if your last one was fun, this one will be too. besides, you'll be there! how can you not have a good time? i definitely get the sense you could get a party started! :)

Riddle me this Batman... Did everyone at your school line up at Denny's for their senior picture and then celebrate with a Grand-Slam Breakfast?
:-)

My 15 is tomorow night and I'
m not going because it costs 85 dollars and I'd rather buy shoes. Sounds ridiculous but it's the truth.

I went to my ex's 10 year reunion (over 10 years ago) and they had a prize for who had been married the most times. Heh. Oh the pride for that winner.

I've never been to one of mine, nor will I, if I can avoid it.

I have NEVER EVER EVER gone to a reunion. And my 25th would be next year...I imagine I won't go to that one either as they are typically L-A-M-E, at least by what the invites suggest.

My 20th was when I was preggers and they were charging $50 a person for sad appetizers (NO DINNER - APPETIZERS??? $50???) and boxed wine at the Minnesota Landscape Arboretum. Seriously? I was not paying $50 to stand around and watch the idiots I went to school with get wasted on box wine while I could not drink, outside, in AUGUST!
I have Facebook to see how cool or dorky they all turned out...who is the same, yes you PH, and who is even cooler. Like me??? ;)