It seems my Mom was always a mother.
The woman I only knew as "Mom" and nothing else seemed as if she had been born into the role, that it had been pre-determined through some cosmic game of roulette. In my mind, she was always a grown-up, always taking care of us, and always wearing polyester pants and shoes with no socks (I guess I know where I get my disdain for socks from). In my mind, she dropped to this earth and landed in our house just in time to whip up a batch of chicken & dumpling soup. 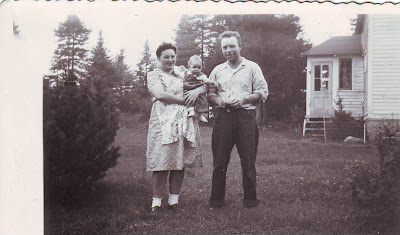 Her mother, Ellen (pictured above with Grandpa "Joe"), died suddenly at a young age, leaving her devoted and hard-working full-blooded German husband to care for all four of their young children himself. My mother, being the oldest, was quickly thrust into the role of the "woman of the house" as she was the only female as well. She learned how to run a busy household in her early teens- cooking many of the family meals, cleaning the large 2-story house, doing laundry and such, all the while going to school and trying to lead the "normal" life of a pre-teen/teen. 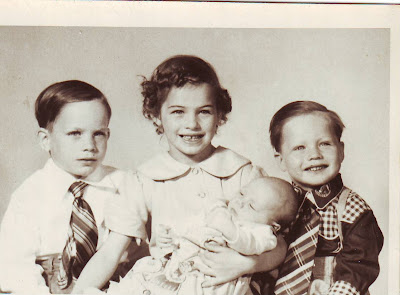 Grandpa never remarried, though from stories I've heard there were plenty of women trying to catch him in their lady-nets. He was charming, intelligent, honest and witty as hell. His thick accent and straightforward manner let you know that what you saw was what you got with him. No bullshit. That trait, one I admire and seem to have inherited, carried over to all four of his children, including my Mom. In my teens, my Mom's seemingly nonexistent brain-to-mouth filter was the source of endless embarrassment and entertainment. You never knew what she was going to say, usually too loudly and often followed up with her infectious laugh. 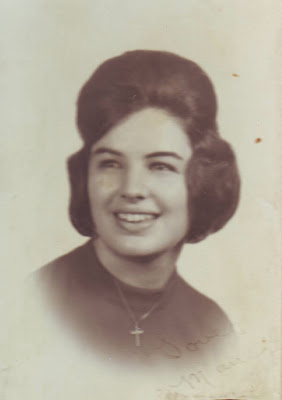 She and my Dad grew up near each other- my Dad lived off of one side of Raleigh Street in West Duluth, my Mom grew up off of the other side. They shared many of the same friends and by default, much of the same history. It just made sense for them, in a time where nearly everyone got married, settled down & had kids right out of high school, to get married, settle down & have kids right out of high school.
Then Vietnam happened, and my Dad went off for what was his first tour of duty, leaving my Mom behind to finish her last year of high school and wait for him to come back. 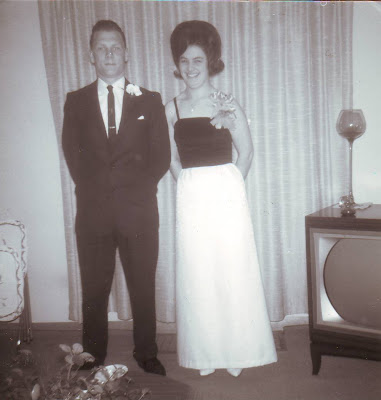 Luckily, she had a great support network: several close girlfriends, her brothers, her future in-laws, and my Dad's three brothers and one sister. The picture above is my Mom and my (also deceased) uncle Iver going to prom. I don't know the whole story, but I believe that Iver took her to prom because he was "safe". My Dad didn't want her going with just any guy (especially one certain guy who was very good-looking and had his eye on my Mom, I would later learn), so his closest brother was her date. My Mom & Iver were good friends anyways, and he was funny as hell so she ended up having a good time after all. 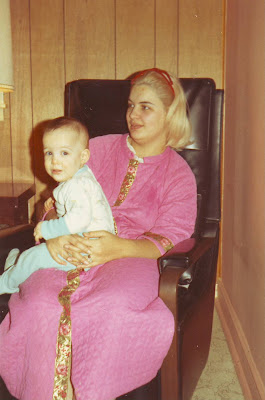 Dad made it back, they got married, then came the kids. She didn't really think about other "options" for her life. I don't think that (at the time, anyways) College ever crossed her mind- it was time to grow up and do what you're supposed to do- set up house, fill the house with kids, live happily ever after. Later on, she would tell me that, though she loved us girls dearly and couldn't imagine her life without us, she sometimes wished that she had been given more choices for her life. She said that she never felt that there were any other options, and she was so very, very glad that we, her daughters, had nearly limitless potential for our lives. I think about her saying this often- I hope I've lived up to what she would have wanted for me. 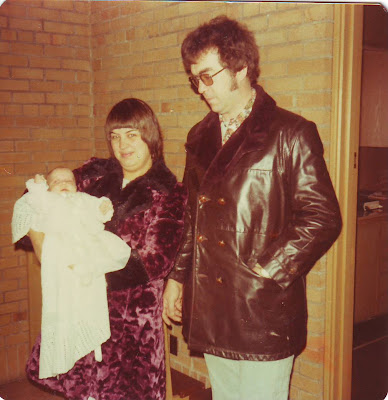 It's been almost 18 years since she died, but I still think of her almost every day. I miss her bright hazel eyes and freakishly perfect fingernails. I miss how she sometimes cussed like a longshoreman, but would never, ever drop the f-bomb. I miss how one glass of wine made her goofy. I miss how she'd just barge into the bathroom and pee while we'd be primping at the mirror, talking to us about our day the whole time. I miss her sometimes misguided attempts at "ethnic" cooking.

Mostly, though, I miss her unfailing devotion to her girls, her family. No matter how goofy we'd dress, how moody and PMS-y we were, or what ingrates we could be, she was always, always on our side- ready to defend us or knock some much-needed sense into our noggins. She kept us humble and she was our biggest cheerleader. She was a pretty cool broad.

Since it's Mother's Day, I guess I was just thinking about mine...
Posted by Whiskeymarie at 3:09 PM

That was really lovely.

That was a great tribute. . .and totally made me tear up!!

Your mom sounds like she was just the perfect mom for you.

I think your mom just read your post from her laptop in heaven. And then she carried her margarita (you know one of those MEGAritas) and returned to her cloud and knew that you had made her day with your beautiful blog post.

your mom sounds like she had the patience of a saint with you bratty girls.

her feelings about 'wanting more' are probably echoed by many other women from Raleigh Street...some i'm probably related to :)

this was a lovely story- thanks for writing your thoughts down. i am also teary-eyed.

Now that is one perfect piece of writing, one moving memoir and just about the best thing that I have read in a long, long time.

(PS i love the lounge chair in that one photo, and wish i could move the photo over to the left to see the sweet-looking lamp and end table...)

Lovely tribute, WM. I'm sure she would be beyond honored to read this.

I thought I'd delurk and tell you how moving this was. Thanks for this, it made my day:)

I bet your mom was awesome. She helped form you, so she had to be! This was really sweet. WM. xoxo

From this it's very easy to see where you get your beauty, wit and sense of humor.

I know exactly how you feel. My mom has been gone 19 years this summer and I still miss her every day.

It's awesome to get a little window into how you grew up to be so cool. Nice tribute, indeed.

Your mom sounds like she would have gottten along great with my mom.

My mom and I had robes like that pink one, must have been a sale at JoAnn Fabrics on the stuff.

I would miss my mother terribly, although she is more June Cleaver than longshoreman, she always made me feel special and helps me get just that little extra I need. ;)

Happy Mother's Day, hope those darn kitties got their mommy a good present, or at least let you sleep in!

Teary eyed... Hope you got through the day okay. xoxo

That was pretty much a perfect post. I'm sure your mom would love it.

Thank you for sharing her with us. I'm pretty sure your Mom and my Dad are hanging out laughing a lot and talking about what cool kids they have.

.WM, That was a beautiful post about your Mom. I really enjoyed the pictures too, because I'm an old fart, and more their age than yours ! LoL, really had some 60's flashbacks lookin' at the clothes and hairstyles. Too Cool !
Your post also reminded me how luicky I am that my Old 85 year-old Mommy is still hanging in there. She was always "just a Mom" for all her life too, and raised 8 of us pretty much on her own.

You ought to print this post out, so you can share it again, and show it to your 18 kids when they get old enough to appreciate it ! LoL, Thanks !