Oh my dear Volkswagen, you caress my buttocks with the gentle touch of a butterfly's wing.

So...back from my brief but action-packed journey to D-town for Ms. Hotpants & Blondie's B-day festivities. I was a little hungover this morning, but a reuben, fries and a Pepsi Icee knocked that right out of me in no time at all. God bless you, inventor of the reuben. I love you and will gladly tend to your fermenting sauerkraut any time.

I drove the 2.5 hours north yesterday. I have driven this path so many times I have the billboards memorized: Pro-lifers, pro-lifers, Hardees, anti-meth...and snowmobiles. And that's just between Pine City & Hinckley.
I hate that drive.
However, unlike the previous 5,348 times I've driven this route, this time there was some excitement: 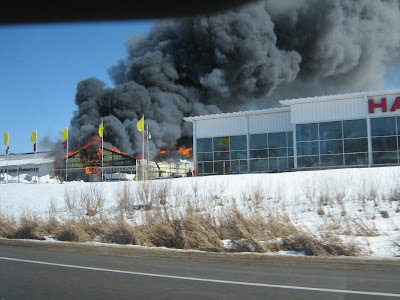 Then, back to the drive. Billboards, fast-food and snow. Yay.


After a quick stop at the in-laws, I ditched Mr. Whiskeymarie & went off to my sister's place to borrow some things for my trip. My sister, Snowshoe, and her husband, Camper, have just adopted a new boy. Jasper is pretty hairy, pees outside, sniffs butts and licks faces- they couldn't be prouder parents. I think I love him too.
I may kidnap him someday, so watch out guys.

After nabbing 2 suitcases & 2 sarongs, and retrieving 2 of my cookbooks and a sweater (which I remember being bigger. Did Mr. WM's J. Crew wool rollneck make an unscheduled visit to the dryer? Hmmm?), I was off...again.

Next stop: Waffle's house on the outskirts of town.
Blondie was already there, doing one of our favorite things: the pre-game lounge. It's always nice to take a few minutes and relax before heading out for the evening, if for no other reason than to make note of the last moment you remember before drinking yourself stupid.
Often, this is when we have the first cocktail of the evening, which Blondie was already doing (windsor-7), but I had nominated myself to be the DD for the night (a rare occurrence indeed), so none for me just yet.

Once the foursome was complete (me, Waffle, Blondie & Ms. Hotpants) it was off to Barnum.

Which, if you know the area, you know that this is a 45-minute drive back the way I just came.
Yup.
Oh well, whatever my sweets want for their b-days, they get. I would drive to Texas & pick up ribs, slaw and a cowboy, if that's what they wanted- I love my girls that much.

We went to a restaurant there called the Hanging Horn. I had heard a little about this place from Hotpants & a few others- It seemed interesting. It's in an old camp of some sort- log buildings, antiques, dirt roads & such. Quaint, cute.
It's in the middle of freaking nowhere-and, as usual, fate smiled down on me & we got lost. Nothing is more disconcerting than a pitch-black night (no moon), dead-end, mud-slicked dirt roads & a bunch of giggling girls in a car, lost. All we needed were thin white cotton nighties and mullet-haired boyfriends with muscle cars to complete the cliche'. Jason? Is that you? Freddie? Is that a chain-saw I hear?

Dinner done (it was o.k, steaks, pasta, walleye- standard Northern MN fare. But not cheap & the service truly sucked), we were then off to...
Scanlon.

Yes, you read that right-Scanlon.

Scanlon isn't much, as some of you may already know. It's one of those places that is really just dead space between two or three actual towns that no one wants to claim, so at some point they just drew a circle on a map & said, "Hear-ye, hear-ye, we proclaim this tiny parcel of dead space...Scanlon." It consists of a gas station, a few bars, a liquor store, a few houses, and a titty bar. That's pretty much it.
We went to the River Inn, hoping to see/gawk at people from our hometown, as we can usually count on a few "Holy shit-look at her- she still has a perm" and "What the fuck happened to his face?" comments coming out of our mouths during these visits. Last night was slim pickins, though. Only 2 people we recognized: One girl a year older than us wearing (no lie) flannel p.j. bottoms as pants and looking about 10-15 years older than she actually is (with that permed & frosted mullet-style hair many girls rocked in 1988), and a guy we graduated with who we see all the time.
The highlight of the River Inn was the live band: Live Bait.
Awesome name, guys.
They were fantastically bad- a Great White cover here, a Billy Joel cover there- but pretty much what we expected. The bass player had one of those headsets like the people who work at the Gap wear, and he kept coming into the "audience" to interact with his "fans".
We just tried to avoid eye contact- kind of like you do when you encounter someone dressed like a sandwich handing out coupons for the sub shop they have the misfortune of working for.
It's just too sad. I can't look.

Several cocktails for them, a couple light beers for me later...
Next stop: the Runway bar in Hermantown.
Yes, Hermantown.
Be afraid.

I was promised that people-watching at the Runway would not disappoint.
Holy shit, they weren't lying.
A potpourri of humanity: White trash, college kids, aging divorcees, NASCAR enthusiasts, pseudo "biker" guys, sad lonelyhearts, drunks and a wedding party, just for flavor. Plus, another cover band.
Awesome.

Sit back & enjoy the show, folks.

I was kind of hoping for a bar fight, but I had to settle for the crazy drunk girl draped on the possibly syphilis-infested biker guy- flirting, groping & pushing her tits in various faces one minute, bawling like the homecoming queen runner-up the next.

So, back to Waffle's: opening of presents (we give the best gifts. Both b-day girls got piles of booty: tons of Aveda stuff, gift cards, purses, sexy undies, vintage kitchenware & scary clown books are just the tip of the iceberg we call birthdays), more cocktails (mostly for semi-sober me), some (ahem...) "possibly legal in other parts of the world" substances, and hot tubbing.

Next weekend: Repeat much of above, then fly away to do the same thing in a foreign country.
Seriously.
I have to drive up again Friday.
Sheesh.
Posted by Whiskeymarie at 4:00 PM

OMG. the River Inn? The Runway? too funny.

sounds like a fun young-girl night out. i'm getting so old.....