Did you hear? Violet is the new black and cat piss is the new Chanel #5

In the interest of not frightening the locals, I have begun the dreaded, nay, feared...fake tan.

I love my porcelain skin, generally. And I know very few who can claim skin pastier or whiter than mine- except for Blondie. She wins, hands down. Props to you, my lovely fellow "delicate" creature.

However-let's get this one crystal clear, my little blossoms- I do not believe in roasting your precious skin in one of those ovens/turkey roasters/tanning beds. Wrong, wrong, wrong.
To remind you of the fun that could be yours if you keep that nonsense up, fake n' bakers: 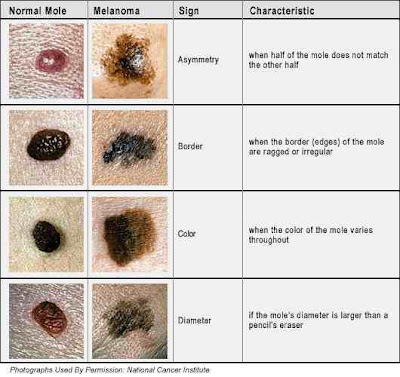 When I choose to create my illusion, I choose to do it serial-killer style:
Put the lotion on the skin, bitch!

Let it be known that said lotion and myself do not have a good relationship, and I have tried them all- from $5 to $45 dollars- they all smell like cat piss.

Proof: I went to dinner with my girl Lil' A. a few summers ago. We looked gorgeous- freshly showered, made up, sexy little outfits. Nailed it, as she and I compete a little so we try extra hard.
We decided to go to the new "it" place, where we had a few friends/acquaintances working. We settled in, ordered drinkies & food, and basically basked in our fabulousness.
We were being waited on by Bad Waitress, a friend of my other girl, Big A. Didn't really know this chick, but in my minimal encounters with her I knew enough to know that she was not my kind o'gal. Didn't know her enough to hate her, just...you know.
We were pretty sure several excellent specimens of manhood sitting near us were checking us out, as some of them kept turning around & peeking.
F.Y.I.- Yes, I had applied a nice layer of some fancy self-tanner before going out, for just a little "glow".

Fast forward a few weeks:
Sitting around with Lil A. & Big A., discussing said restaurant.
Big A, master of subtlety, pipes up- "Bad Waitress said one of you guys had really bad B.O!"
What?
We were showered, primped...we had HEELS on, for christ's sake!
No way, not us, we defended.
Conversation ended, we moved on.

Only a week or so later did I realize it was me. I was the stench offender. The boys were probably turning to see who the stank 'ho was.
I tried to explain that it wasn't the result of bad pit/feet/crotch hygene, just bad judgment. Then I just gave up.
B.O? Whatever, I've been called worse things than "rife with stinkioscity".

Why can't this crap smell better? Or does it just react with my lack of melanin and produce a offending stink wholly unique to me?

So, yet another year where every once in a while the people around me wonder what's wrong with me now that I've let my personal hygene "slip".
I'm not telling, either. I'd rather they think I'm dirty and smelly. Maybe they'll stay the hell away & I can get some work done, for once.
Posted by Whiskeymarie at 10:41 AM

Being olive-y, but not dark olive like Mr. MP and Mr. WM, I also use the fake approach during my washed-out days of winter and early spring.

The best one I've found so far is Neutrogena. Spendier but worth it. Do not, I repeat, DO NOT use the Target brand Jergens stuff. Talk about reekage. Plus you have to layer it on 16 times a day to see any difference.

Poem for the day:
Alas, methinks
thou dost stink.
Your ghostly glow
has got to go.
Pay the price
to look, not smell, nice.