So, I've spent the last 9:29 shaking my booty to Underworld's "Shudder/King of Snake" whilst thinking about how interesting I am.
Really. I have.

I got tagged by thy Lovely Lady Brillig to come up with 10 things that are interesting about me.

I'm going to say that my choosing to very often dance in my living room to "dark" techno music at 10:00 in the morning on a weekday is #1 on my list.
Helps me think.
And I think it scares the neighbors a little.

Continuing, nay- forging ahead, here's numbers 2-10.*
*I make no guarantees that the following items will be interesting to anyone. If not completely satisfied, please send your computer, with a written reason for your complaint to: Whiskeymarie, 36 Whiskeymarie Lane, St. Whiskeymarie, Mn 90210

#2) I say this in all honesty- I have never been dumped. Ever. I can't really figure this one out, as I have been a shockingly bad girlfriend at times. With some I was actually trying to get them to dump me, to save them a shred of dignity, but no such luck. I don't really see this fact as a necessarily good thing, for the record. It just means I was dating pussies of epic proportions.

#3) My first kiss was at age 14 in my parent's garage with a guy I didn't really even like- I mostly just wanted to get it over with & see what the big deal was. This particular event did not make for a good first impression. To this day, the sweet smell of spilled oil, seeing a beer can collection or an outdated calendar with a half-naked girl posing with car parts makes me a little misty. Sigh.
Oh Kurt, such sweet memories of you trying to simultaneously suck and swallow my face in one gulp. Sexy, sexy.

#5) In case you haven't noticed already...
I, cant' punctuate. To...save my; life! And? i was 'an english) major( in /college.!
Plus I really like to use run on sentences that go on and on and include lots of REALLY really reallys, lot of LOT'S's, and lots of really really interesting things that sometimes make sense and sometimes don't, but that's really not the point because of LOT of what I write is pure crap, me just rambling aimlessly about stuff that may be oh so fascinating to me, but not so much for you, but maybe for you, who knows? 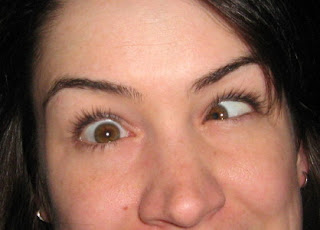 Yes, I am painfully aware of my magnetic beauty. I get that a lot.

#7) I somehow managed to turn my lifelong love of cooking into a pretty lucrative career. For a while, in my 20's, I started to worry that I would spend my life as middle-management at "Contessa's Cat Toy Nook" in Wherethehellami, Mn, or something equally challenging. Luckily, I signed up for cooking school kind of without thinking about it, aced the classes & had a pretty interesting 8-9 year run in the restaurant world. Now I teach at that school. Who's in charge now, ass monkeys? Huh? ME, that's who.
Word.

#8) I have mentioned this before, but it bears repeating:
I got married on a whim. Really. We were drunk when we got engaged. It was at the Anchor Bar in Superior, WI after a day of roller-skating at "World of Wheels". We didn't really think too much about it after the decision was made, In fact we pretty much thought it was a joke that we were taking WAY too far. I didn't really go crazy with wedding planning. I wanted to go to Vegas & have Elvis at the ceremony, he wanted to go to Vegas & have Elvis at the ceremony. Actually, I was hoping for fat, sweaty Elvis, and lucky me, I was NOT disappointed.
Other people wanted to go, but we didn't make anyone do it, we would have been fine on our own. 20 people came with us, which was nice, but I never wanted it to be a big deal. We laugh about it now, but we both were pretty much thinking, "well, why spend too much time & money on this as we probably won't make it more than a year". No biggie. I don't think we really saw it as a "permanent" thing.
Joke's on us, I guess.
Really more so on him though.

#9) I passed the SAT's in 6th grade. A group of us took it as an experiment to just "see" how we did. Shit, I could have gotten into any mediocre State College at age 12. I'm guessing they raised their standards a little after that one, as I do not even remotely resemble anything approaching "genius". I didn't really care about school, but always got A's & B's. Nothing special, to be sure. I am someone who couldn't assemble a garbage can from Ikea, even if it came with a how-to video. I'm tellin' you- Cletus the Slack-jawed Yokel could have passed.

#10) My mom died when I was 20. It was sudden and devastating. I still don't really like talking about it. But, this single thing has shaped the person I am now. One big event like this sets off many, many smaller events that, together, change everything you thought you knew, everything you thought you were, everything about the future you thought you had.
I'm not looking for sympathy here. People die every day. We've all had death shake it's ugly, bony finger at us. This just really is the one thing I can draw all the lines back to- some good, some, well...not so good.

It's just who I am, Interesting or not.

In the spirit of the Meme, I'm supposed to tag 10 others to do the same- write 10 interesting things about yourself. I'm not sure I even know 10 people, total, but I'll list a few that I do:

That's all I've got, I think anyone else I can think of has done this already. Do it if you want, don't if you don't. It is kind of fun though, and really, we all do love talking about ourselves.

Oh. My. Gosh. I can do that thing with my eyes too. Now I know we really are kindred. Or at least I WISH we were kindred. You are so freaking hilarious. I absolutely loved reading this. And yes, it was VERY interesting, and yes, you ARE a genius (though I sorta feel the same way about the SAT's) but you can take something mundane and make me laugh hysterically over it. And that, my dear, is PURE brilliance. Well done! Thanks for playing along!

Awww crap. I just realized how that sounded--like you write about mundane things. That's not at all what I meant. What I mean is that even if something WERE to be mundane, you could find a way to make it hilarious. Shoot. Trying to get that foot out of my mouth now...

The thought didn't even cross my mind, my dear.
XO

I'm so with you on #5 - um except for the English major part that is.

Now, I think I'm going to go look in the mirror and practice that eye trick thingy until I can do it right.

Because I don't do anything nearly that cool...unless you count the fact that I'm double jointed in both thumbs.

Oh but wait, this isn't about me -you're right I do love talking about myself :)

#1: I will need a couple of days to figure out 10 interesting things.

#2: I have always wanted to go to World on Wheels in Souptucky. In fact, I like to tell my girlfriends that I want to go to WOW, LesBirds, and Shamrock Pizza for my bachelorette party. Ha.

Also, #3: Thank yopu for tagging me. I am flattered!

I'm on it, as soon as I calm down over my pancake day experience. I can't do that thing with my nose, but I CAN flare my nostrils.

your marrying on a whim is one of the best stories i've heard in a loooong time. v. sweet.

thanks for da Tag!