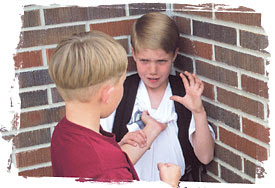 I am a person who prides herself on her fearlessness.

I rarely turn down a challenge- the few times I have it was because I was positive that great bodily harm (myself primarily, but I am not entirely unconcerned with the safety of others lest you think me cold-hearted) would be the inevitable outcome. I rarely get nervous about new situations, I have almost no fear of public speaking, and some of my more unfortunate fashion choices speak volumes of my bravado.


I am, however, still intimidated by bullies.

Mostly of the grade/middle school variety.

I was out for a walk today, and I passed one of the many private catholic schools that one finds in St. Catholicpaul. Across the street, loitering on the corner before class, were four boys, probably around 11-12 years old. They were heckling their classmates mercilessly, making fun of the fat kids, directing grunts and snorts to the girls (for future reference, boys, this is the point of your life you can reflect on in your adulthood as the reason you can't get ever laid- it's because you're an A-S-S-H-O-L-E, dude) and generally just being, well...bullies.

Then they saw me walking across the street.
Me, in my cut off "capri" yoga pants, bandanna around my head, old tennies, stretched out & stained t-shirt and sports bra.

Generally, I hope in this situation that, like many a soft drink/dorito/feminine hygiene product commercial, the boys will stand, slack-jawed at the "hot" chick old enough to be their mom as she drinks seductively from the garden hose in her short shorts and halter top on the sweltering hot summer day. They will carry this image with them through the years, and they will always date older women who can teach them the ways of the making of the love. They will idolize us for the marvels that we are. In college they will have an affair with their roommate's hot mom (think Class with Rob Lowe), eventually settling into a pool-cleaning business in order to hopefully score a nice, rich Cougar.

Instead I got pig snorts, chuckles and a few "hey's". But not the good kind.

On the way back from some sort of excruciatingly painful sporting event at the football field, I hear the voice of the one boy I my grade I actually thought as a little cute. "Hey, fatass!" I heard. I started looking around to see which of my more rotund classmates were getting it this time. No one- it was just me and a few of my 5', 75-pound friends. Who could he be talking to?
"Hey, fatass!"
I turned around.
He was talking to me.
My heart dropped, my face flushed, and my pace quickened. I practically ran back to class and just tried to pretend he wasn't talking to me and laughing about it with his other asshole buddies.

That was the day that my teenage body-image issues were born, and from that day on, I was fat. A fatass.
I'm fairly over it now, but my hatred (and slight fear) of bullies has not waned.
Picking on the weak, the insecure, the challenged- you're really a MAN now, aren't you?

Well, fuck you, Mr. Bully man- Y'all kind of looked like you were growing "man babies" at the last reunion. And, where's your hair?
It's a shame you guys had to turn 40 before the rest of us.
Oh, and how's that job towing cars treating you? Still living at your parent's house? Still struggling with the Meth?
Good luck with that.
Karma's a sassy bitch sometimes, my boys.

But seriously, I must thank you and your douche friends, as you helped shape the ass-kicking broad I am today.

Though I still hope that you get your ass kicked by a girl someday, and I hope it will be me.

You better start working out now, fatass.
Posted by Whiskeymarie at 11:36 AM

I got a lot of the whole fat-ass routine in high school. And I'm avoiding my 10 year reunion due to the bitches from 9th & 10th grade. Which is actually a pretty stupid attitude.

I have a total crush on you.

And now, I think I'll go kick some random dude in the balls. Why? Becuase I can.

I like to think that the good Lord blessed me with so many sons so that hopefully I can help curb this kind of thing for future generations. I'm already imagining how I will punish my boys if I hear that they treat people this way. I just hope the state doesn't take them away from me as a result...

And Sugar Kane, I DIED laughing at your comment. HAHAHAHA

hee hee. Why is it that those types of boy often grow up to be the pervy, wine-flushed, beer-bellied, dull as shit, miserable, wife-cheating, pathetic men that everyone tries to avoid at parties?

I was bullied until I got braces braces. SIX long years of bullying. You'd think they'd at least have stopped after I learned how best to breathe through my nose at all times so that I could avoid opening my mouth for any reason.

i believe karma was invented for people who were mean in high school....

my fav is running into bitchy girls from the high school days who gots lots o' babies but no baby daddies.