Belated weekend update. Not much to see here, folks. 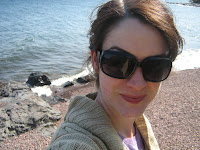 Saturday in Duluth for a belated b-day outing.

Once in town, I had to kill time as Waffle was still busy buying & wrapping my gifties & I was therefore banned from her house for a while- so I went to Leif Erickson park for some fresh lake air.

I'll have a Whiskeymarie on the rocks, please. 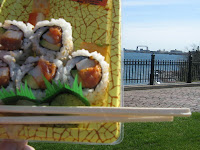 I was hungry so I picked up some grocery store sushi at the recently fancified Mount Royal store.

Note to fancy-pants store:
While I don't expect much from grocery-store sushi, I DO expect my tuna dynamite roll to not be infested with IMITATION CRAB MEAT. You are vile, fake crab.
Dynamite roll = tuna, spicy mayo,maybe avocado & rice. That's it.
Fake crab in just plain 'ol wrong here on 12 different levels.

Dinner was at this place in Souptown called "Le Bistro"
Worst name ever for a restaurant.
But the food was good. Real good. I had a perfectly cooked medium-rare beef tenderloin au poivre (with pepper sauce), a tater and braised cabbage with rapini. Yum. I ate it all.

Oh, and we shared chocolate mousse cake for dessert.
Me, Blondie, Waffle, Ms. Hotpants and Maurey.


"Le Bistro" is housed in a building that used to be the Souptown P.D. Cop Shop.
I have the dubious honor of being "detained" there when I was 20. I got into a car accident (my fault- duh) and in Soup, if you cause an accident, they haul you in. Awesome. I was with Blondie & our friend KT and we had been thrift shopping all day, so we were of course broke.
I had to pay a $75 fine to be released.
Hello, Dad? Can you bail me out of jail? (slight exaggeration here, no bars were involved).

He was never prouder of his ADULT daughter than on that day.

After dinner we went to Frankie's for some high-quality Karaoke. This little, unassuming little gerbil of a woman did the most Awesomely Awesome "Ice Ice Baby" that I have ever seen.
Word to your mother.

Then...Stargate.
To those of you unfamiliar, Stargate is a sad excuse for a "Club" where the people watching is as spectacular as the outfits are awful.
Bad R & B music & skanky guys hitting on you left & right.

Him: "Let me buy you a drink."
Me: "Thanks, but no. I'm married." (note: I rarely, if ever, turn down a free drink. I just saw this heading south real fast if I had accepted. Before you know it I'd be explaining to the Mr. why Tito was moving into the guest room "with privileges")
Him: "I don't see a husband anywhere. Come on."
Me: "I don't think so." I walk away.
A minute later he walks by with what appears to be a mid-priced hooker on his arm. He gives me a look like, "you lost your chance, loser."
I'm heartbroken. 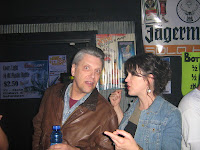 I did get to meet the middle-aged love child of Paulie Walnuts and Johnny Sack from The Sopranos. He seemed unscathed by his fame.

He also didn't find it odd that I wanted to take a picture with him, the mark of a real class act star, I tell ya.

Sunday: hangover, junk food, driving home, more junk food, couch.
The End.
Sorry it wasn't more debaucherous.
I'll try to do something that involves me losing my pants and home bikini waxing this weekend.
I'm long overdue for both.
Posted by Whiskeymarie at 9:33 AM

Is it wrong to hope that Paulie gets whacked before the show ends? He's kind of an jackbag.

Great evening. I especially enjoyed rocking out to JT with you. But not Vinnie. Please, someone, get rid of Vinnie. There was a whole Sopranos theme to the night.

I can't wait for the report on the pants/bikini wax losing weekend!

Oh, it sounds really fun! I can only imagine that your high standards for meals are rarely met, you being the queen of cooking and all. But yeah, imitation crab meat? Uh... what??? WHy would they do such a rotten thing!?

Actually, I'm actually fairly non-judgemental when it comes to food & people cooking for me.
The rare exceptions are when I'M cooking for guests, and when I'm spending big $$ dining out.
Then, Ms. Judgy McJudgester comes out with her tall, black judgyboots on.
Grrr...

Hey! I've seen you around a lot...I never knew we were from the same area.

Don't you just love people who will pose for any camera? My favorite thing about having a blog is having an excuse to take random, odd pictures.

Yes, Ms. Butrfly, I just recently realized we are in the same part of the world.
Nice to sort of meet you!
;)

happy birthday! glad you had an eventful trip up north!

thanks for the sweet thoughts. mwah.

I go crazy when I hear a cymbol and a high hat.