So in the further pursuit of complete and total personal humiliation, I am jumping on the "look at my scary prom pictures" bandwagon.
Again, I remind you, I have NO shame. Remember? Do you??
I sing and talk to myself at the grocery store, I wear inappropriate clothing to things like, oh...baptisms, weddings, funerals, work meetings, and just about any other event occurring on a daily basis in this thing called life. I dance while shopping (alone) sometimes.
I drink whiskey and do stupid/funny/gross/illegal things.
I go to prom in the 80's.
No. Shame. 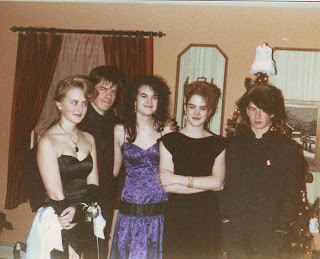 Here we go.
This wasn't actually prom, but the winter "snowball" dance where the girls ask the guys. I kind of liked the goth-y guy I was with (on the far right) and had made out with him on occasion, but as you can see from the picture, my friend Scandia (blonde, far left) had ideas of her own that night. Turns out she liked him too. I never really ended up dating this guy, and I'm pretty sure I was still with my BF at the time, but I just didn't tell him about this event as I obviously wanted to go with someone short, surly and socially retarded, turns out.
The dress was $5 on clearance from Maurices. it dipped low in he back & had a big satin bow at the top of my butt. It was knee-length and actually pretty cute. Someone really should have talked to me about my hair though. I think I had some equation for "special" events where my hair height had to be exactly 1/2 the height of my head, or at least high enough to compete with Ms. Waffle's.
This was 1988. 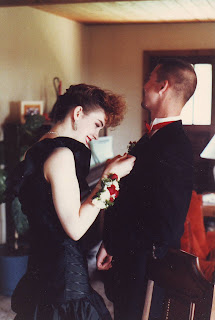 This was prom, but not my prom. My BF, named Crew-Cut, went to the local private Catholic High School. He was a year older than me, so this was his senior prom. I REALLY didn't want to go to this, but I couldn't resist having a reason to put on something that consisted of approximately 45 yards of rouched taffeta. My Mom made this dress for me, as I wanted something Awesome and couldn't find the appropriately Awesome dress in any store. This dress was really hard to get on & off, which made for interesting back-seat-of-the-parent's-Volvo gymnastics later on. 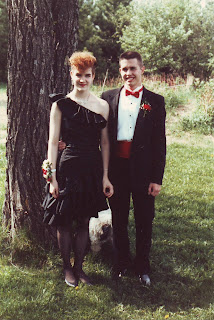 Not only do I appear to be born of Dracula "a.k.a. creature of the night" here, but it seems that my head was being used as a host to grow Lindsay Lohan's future pubic hair.
Nice bush.

My parents wanted a pic outdoors, so I trudged out & posed with my sweet vintage heels sinking into the muddy dirt.

And, I've said this before: Why did we not pluck our eyebrows at all in the 80's? I look like bride of caveman.

I still have this dress, and if I can squeeze into it, I'll post the picture here, I promise (I hope you haven't already forgotten the whole lack of shame thing). 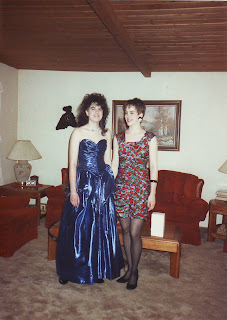 I like to call how I looked for this, my senior prom, as "True tales of a teenage tranny"

And again with the rouching.
My Mom also made this dress as I once again had a "vision" of what I should wear to look hot, hot, hot.
Not, not, not.

You can't tell, but I also have extremely large earrings on here. They had large black & silver stones with little dangly things. Ick. Soooo 1989.

Waffle looks to have been overtaken by a costume from "The Little Mermaid- ON ICE!"

And still, a year later...no plucking of the furry caterpillars on our foreheads. Yikes. 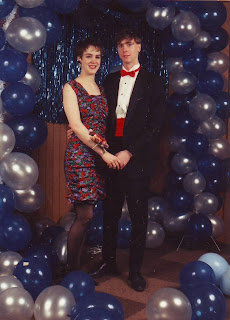 My date, the sensitive "artist". I didn't even plan on going to prom, then like 2 weeks before the blessed day, my friends all notified me that they decided to go, after all. I mean, how could we miss PROM?
I really, really, REALLY didn't want to go the fucking prom with my BF who happened to be, like, 25 at the time. I can't believe he was so whipped he actually said yes & rented that frighteningly awful tux.
We smuggled vodka into the dance (at Spirit Mt., for those of you familiar) in sanitized, empty pump-type hairspray bottles. We were clever like that.

We did not, however get drunk.

No one got laid this night.

Actually, I think his is the point where I started kind of hating this guy & thinking of how to dump him. I was a real bad breaker-upper at the time, so I waited 6 months to do it at the yearly X-mas bash.
Yeah, I know. A real bitch.

I still have this dress too.
I think this weekend is going to include a little "hey honey, let's play prom!" time.
Or, alternatively, "let's have Whiskeymarie try to get the dresses on whilst tipsy and complain/cry when they don't fit" time!


P.S. I have a scanner now, so for a while you're going to have to put up with a lot of old pictures.
That's just how I roll, y'all.
Posted by Whiskeymarie at 11:17 AM

Nice post, its a really cool blog that you have here, keep up the good work, will be back.

Hahahahahahahaha. Such a pretty girl. Such horrifying pictures. And yes, I love you for posting these. And I'm so excited to see what else your scanner entertains me with.

And I will cry if you can fit into your dresses from high school. I'm pretty sure I can't even squeeze one thigh into any of my dresses from back then...

O.k...
Hey Biby-
Which part did you like best? Huh?
The pubic hair reference or the tranny comment?
You sound like my kind of blogger.
Yup.
Sorry folks-I thought I could delete this shit, but I can't quite figure out how. Stay tuned...

I swear the little garbage wasn't there when I wrote that.
I swear!
But in true blogger style, It's there now. But now my work computer won't let me delete.
Arrggghhhh!
O.k. folks, back to prom stuff, just ignore Biby for now...

i'm with brillig...i think I'LL cry if you can fit into your prom dresses. i think i can maybe get my big toe into mine.

funny....
you are a brave soul to post prom pics. and these are so ingeniusly 80's, they might end up in some random advertising campaign!

Yes, be careful. Until now, I was sooooo stumped as far as what visuals to use for my next big campaign ...

Absolutely hilarious! Anyone who can work in a pubic hair reference and a tranny comment is brilliant in my book.

Hey WM-
I made my way over from Brillig's blog. Biby somehow made his way over to my blog too w/the exact same comments. I initially thought what in the hell...? But, that post happened to be one of my more "serious" ones (well as serious as I can get anyway) so I thought "ok fine he's here" and welcomed him.

Of course, he's bound to be a little disappointed when he realizes my "cool" blog and next "nice posts" are about stuff like how my kid now picked up the word fuck- or "fuff" as she says it and "son-of a bitch"

Anyhoo, lovin the prom pics and the reminiscence. Weren't the 80's the best...especially "the gear" I love how all the dresses seemed to be adorned with big ass bows and ruffles. But it doesn't matter as long as we thought we looked hot at the time right ?