Let's travel 'round the world, just you and me punk rock girl... 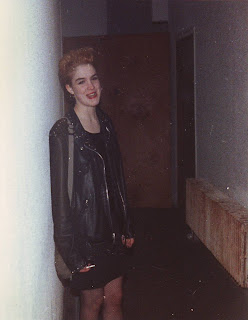 I totally thought I was punk rock.

Sure, when the real, original punk explosion happened I was knee-deep in play-doh and barbies, but dammit, I needed to rebel and I liked leather.
And, I liked rebellious "bad" boys who liked leather.

Living in a very small town outside of an 80's, Reagan-era, depressed smallish city to a teenager was equal to living in the seventh circle of hell. I wanted excitement and noise, I got farms and a town square that consisted of two gas stations, a beauty shop and a museum devoted to the milling of grain. No car and no one to drive meant another Saturday night listening to records by Fear and the "Let them eat Jellybeans" compilation at Waffle's house while her mom brought us sodas and rice krispy treats and we pretended we were listening to NKotB. Sure, the treats were delicious, but we were pretty sure that Sid and Nancy never sat around wishing they were cool while snarfing Doritos and Funyuns. Sid and Nancy didn't have to hide records with songs like "Jesus entering from the rear" from their Moms.
Sure, there was that whole heroin thingy, but you get the drift.

I was growing out of my love for Duran Duran and bubblegum pop. I started listening to the local college radio stations.

Where before I loved Wham! (god, how I LOVED Wham!) (O.k, still do) and Huey Lewis and the News, my interest now leaned towards bands like GBH, The Germs and the Dead Kennedys.

Today I found a box that had a bunch of buttons I used to wear back then.

Seems I was a Gumby-lovin', peaceful sort that volunteered occasionally for Planned Parenthood (keep your debates to yourselves, people.) And I guess I thought I was of English descent and had visited New York, though I hadn't.

I also wore a lot of black and embraced my darkside. Soiuxie and the Banshees, the Sisters of Mercy, Bauhaus and Christian Death provided the soundtracks to our darker moments. "Darker" moments meaning not getting asked to dance at the local teen dance club "Faces" when the Smiths were on, or chipping my blood-red nail polish on my longish fingernails. 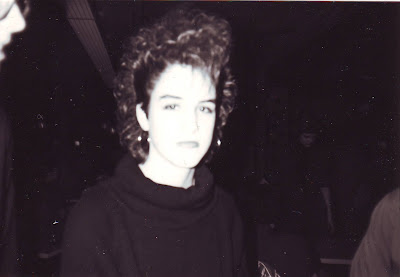 Looking at what we wore and what we did to our hair, you can tell we still had a pretty good sense of humor. Sane people don't pair clunky, knee-high lineman's workboots with green fishnets, a vintage sundress, an army surplus bag and spiky orange hair. The Violent Femmes, The Dead Milkmen and The Dickies kept us entertained those days. 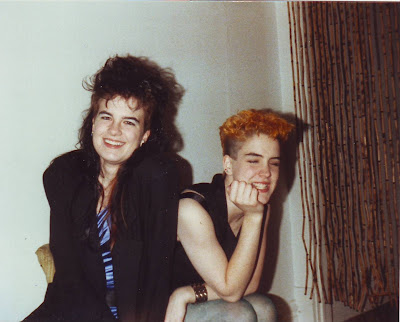 I suppose I should regret the hair, the unfortunate clothing choices and the time spent huddled over a record player that could have been better spent studying for my SAT's.

I suppose I should. 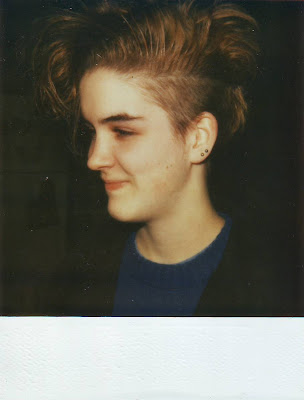 Holy crap, it was a lot of fun.
It was silly.
It was at times really, really stupid.

It was difficult and liberating.

I don't regret a single second of it.
Posted by Whiskeymarie at 10:07 AM

I never would have guessed. Had you pegged for a .38 Special kind of girl all the way. ; )

You're too cool for sharing these awesome photos! :) Are you going to start wearing the buttons again? ;)

Aah, those were the days! ( I thought I was so punk rock I wore a larger then life safety pin on one of the zippers of my leather jacket - it makes me laugh now to think about it)

Mr. WM and I were having a "talk" the other night about our son and how we'd feel if when he gets older he wears pants 40 sizes too big, grows a really big 'fro with a pic sticking out of it what we'd do.
Well the Mr. said "No way, my son won't look like a gansta". I said "Ok, Mr Flock of Seagulls (yes he totally had the haircut) much like our parents "let" us do we need to let him express himself.... (uh that is as long as he gets good grades and is staying out of trouble). .. of course then it occured to me how truly old I'm getting.

I had some of those very same buttons.

Love that you were perfectly flawed! Look good in the black. The 80's were such a fun time! Thanks for the flashback.

kilax- Yes, I probably will wear them occasionally. I am such a dork.

WM- Once, in the mall, I walked by a stuffy woman who gasped when she saw me and said, "WHAT kind of parents does that girl have?"

My Mom, who was walking right behind me, got right in her face and said, "I'M her mother and I think she's great the way she is."

cdp- I dedicate my first re-wearing of the buttons to you.
;)

Ren woman- When my life is not so interesting, you guys get flashbacks. I'm just lucky you all like them.

Gumby was such a fucking rebel.

Pokey? Not so much, he was more of "play-by-the-rules" kinda guy.

But Gumby was still friends with him.

That's how cool he was.

I was such a closet punk. I listened to a lot of that same music, but wouldn't have dared to do that with my hair. As it was, I pierced myself a third hole in one of my ears, wore an earring in it for a day, then took it out and let it close before my mom found out. :)

the dead milkman- yes! gorilla girl, big lizard in my backyard, and of course:

that coat hanger button is priceless.

i based much of my rebellion on "girls just want to have fun."
when i got off the school bus, i'd strip down to jams, unbutton my button up another notch and put a ponytail on top of my head.

although i did listen to a lot of moody music.

Oh, girl. I've written a couple posts that reference my faux-punkness as a teen, but I've never put it all in one place. I LOVED the Dead Milkmen: me and My Many Smells liked to Take Retards to the Zoo. I also had sex for the second time while Sid and Nancy played on our tank-sized VCR. I was a "weirdo" in my hometown (pop. 5,000) because I was dating "that odd college boy from the big city" who rode his skateboard all over town.

Oi to the world, you little punk you!

Man, what I wouldn't do to go back to those days sometimes.

A .38 Special girl is a hard-drinkin', Marlboro-smokin' hottie. Often socially retarded with a fondness for primates, and has big hands. See also: questionable punc;tua!ion-n.

Ah, the super-short-short-shorn sides thing. I vaguely remember those being in vogue. Never did it, though I sort of admired those who did. I give Waffle mega-points for volume.

I found an old jean jacket of mine and it was covered in George Michael buttons...obviously, you were way more badass than me.

I.
Fricking.
Worship.
You.

(I'm so glad I kept seeing your name over at Gorillabuns).

I still listen to The Smiths, by the way. My taste in music is stuck in 1988 alternative.

I now find you even foxier, as we have similarly misspent our youths. One day, let's take a walk to Zipperhead and scream "Anarchy" when someone plays a Beach Boys song on the jukebox.

I always wanted to get into punk rock because I liked the name "Jello Biafra." But that alone is not a good enough reason it would seem, and I went the metal route instead because it turned out that I could grow a magnificent head of hair.

HEY, any punk that came of age BHT (Before Hot Topix) is true punk by me.

& GAH! How many more blogs can I afford to be addicted to and still have a non-net life???!! adding you to my blogroll no :)

Where's the "Just Did It" button?

im only 20, but im not sure that you could have picked a better song for your title. i love you.

I picture you leaning up against the brick wall of an alley with a cigarette, listening to Sex Pistols on your Walkman.


Man, those buttons take me back. I would have killed anyone if they dared to touch my "I fought the law" button.

Oh, we would have sooooo been BFF's back then. That's about the time I started experimenting with not-found-in-nature haircolor!
I wore a rainbow pride necklace in high school, not really even knowing what it meant. And I've always been straight, too.
Hey if you get a chance, can you weigh in on today's question on my blog? I have a strong feeling you'd have good advice. :)

did they name bad hair days after you

I think you and my wife may have been the same person at some point. She also lived as a full-fledged goth for several years. makes for good laughs on my part now.

Oh man, I was there...same bands, same buttons, same haircuts (except I dyed mine black.) I don't regret it either. I mean, I feel a little silly sometimes when I think back to how "punk" I thought I was...but really, at hoe I was still listening to pop music right along with the Sex Pistols! Anyway, it was fun & I figure, at least I embraced being a little different if nothing else.

Love the pics, by the way.

Every time I read about your past I wish I had known you then - I would have loved you, and you would have walked all over me. Ah, happy days.

and yeah, it was difficult. and GREAT.

I used to have that gumby and pokey button. I might even still have it, somewhere. I also used to listen to The Record by Fear all the time. Great album.

Trivia time: I used to play in a band called Appliances-SFB that people called "punk." In our day, we played with Bauhaus, Siouxsie and the Banshees, The Violent Femmes, and The Dead Milkmen, among others (do you remember The Suburbs? I believe they were from your neck of the woods.) We even played in Minneapolis a few times. Our first album, SFB, has just been re-issued (on CD for the first time!). If you still enjoy raucous music, you might want to check it out. You can get it from CD Baby here.

Sorry about spamming your comments with shameless self-promotion. I thought maybe you might find it interesting, but I'm probably wrong. Again.

Anyway, fascinating post! But, somehow, not too much of a surprise that you might have had a wild youth.

Oh my! You look a lot like my friend "Huggles" from High School. See we would have been bestest friends. 1985-1989 have been playing in my head for the past few weeks so I started to blog about it. Maybe then I can get back to the present :-)

I wish I could find my stupid photo album with all of my pictures from high school days. Still searching...

Those pix have Joy Division, New Order and The Cure written all over them.