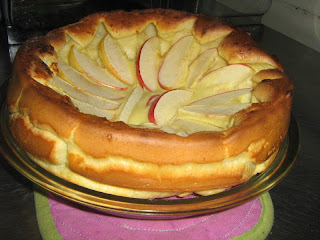 Saturday morning started here, at home, with a puffy apple pancake. Anyone remember Pannekoeken Restaurants? I thought they were all gone, but I guess there are still a few around in the Mpls/St. Paul area. If you've never been, they are a "Dutch pancake Huis" that specializes in these kind of pancakes, with varying toppings. The gimmick is, when they bring it to your table they have to move very quickly, as the pancakes deflate really fast, so they kind of run to the table yelling "Pannekoeken, pennekoeken!"

At Whiskeymarie's pancake Huis, I yell "Get the fuck down here NOW and eat this crap you ungrateful bastard!" Or, something quaint like that.

Full of pancake, we were off- on the road to Duluth for fun and frivolity- a.k.a. family, bad food and drinking ourselves smart.

Dinner was here. Ick. That's all. Ick. My Mr's family loves this pizza. I hate it. The end. 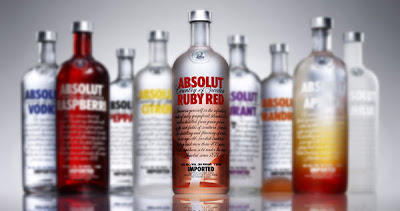 After dinner, we met up with Mr. & Ms. Waffle to go out for the evening.

This picture pretty much sums up my night.

So do the words "strippers" and "nachos."

Once again, I woke up with no pants.
WAMP, dammit!?


Last night's excess has left me a little limp and bleary today. It has also necessitated the administration of non-traditional medicines to help ease the pain: 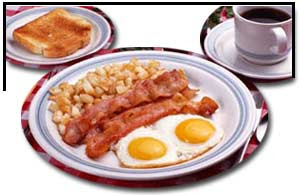 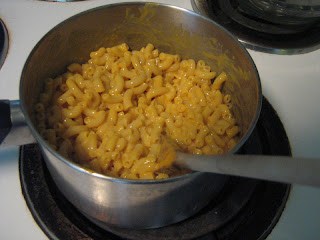 And this.
Lord I love the squishy, technocolored goodness that is Kraft Deluxe Mac & Chz.
I thought that mixing the powdered cheese product, butter and milk today would be too damn tiring. I don't have that kind of energy- bring on the packet of smooshy "cheese" stuff, please.
And I had a piece of chocolate cake too.
Oink.
Oink.

Oh, and I had two of these with my breakfast this morning. Plus coffee. I generally like to have a large arsenal of beverages around for my hangover support. Cokes, water, vitamin water, juice, chocolate milk...

What's that dear? The Surgeon General is on the phone? He can't figure out why I'm still alive? The government wants to use me in an 11-billion dollar research study? They say I don't have any choice and will be here later to take me kicking and screaming obscenities? Did you just mumble something about electroshock? I can't hear you through my stuffing anything cheese coated into my mouth noises! Hmmppphhh...

Tell him I'll call back tomorrow. That Us magazine isn't going to go and read itself, you know.
Posted by Whiskeymarie at 5:32 PM

I too had a weekend of debauchery; you may visit and read the shocking account of my depravity. And I've never been to MN, but based on all of the food descriptions I'm reading on these MN girls' blogs, I'm guessing that it's a bastion of moderation, health, and spa cuisine, much like my own native Pennsylvania.

whoa! congrats on the triple-threat of greasy pizza, mac-N-cheese, and bacon....sounds like a good wknd!

PS have to politely disagree with you on the Sammy's comment though...maybe they put something in the water here, but it is my FAVORITE!!

sounds like the perfect weekend! i think i would have rather had that pizza than fondue. ick.

fellow sammy's loather here ...
we had a pannekoeken in rochester. i wonder if they still have to wear those weird little disneyland-its-a-small-world outfits?

i knew a girl who worked there. she's probably still a virgin.

Thank you for telling me what a Pannekoeken is. I drive past one of the still-existing Pannekoekens almost every day, but I have never been there.

Those pancakes look AMAZING. If I buy you a plane ticket will you move into my apartment and make me apple pancakes? Your husband can come, too. He and Chris can play video games while we eat pancakes.

Oh, and THANKS for the postcard! It was scary/hilarious!

I ate like crap all weekend. I felt it, too!

Glad you got to get up to D-Town. We drove through it last weekend (22nd) with the kids as I gazed longingly out the window reminsicing about the ONLY adult vacation I've ever had. For that alone, I will always love Duluth.

And dude...it's DELUXE Kraft for a reason! Not only easier than the OG M&C, but MUCH better...that's why they call it "DELUXE" ;)

Hey, send me one of those pancake things.

Any weekend that involves nachos, strippers and mac n' cheese is my kind of weekend. Move down south WM and we can eat and drink our way through all of the southern states :)

There's a Pannekoeken in Saint Louis Park. I had never heard of such a thing until someone at work let me in on the secret. I still haven't been there, but I have driven by.

Your weekend sounds a lot like mine, food-wise. Are you sicker than a dog today too?

Diet Coke is the nectar of the gods when hung over.

I had airport eggs on Sunday morning. To our surprise, they were pretty good. The innards of the omelette, however, were, well...just weird. Tasty crab (maybe real, I'm not sure) and raw diced onion. There was gummy hollandaise on the side. Tasty, but gelatinous. Just eat, don't look.

Pah - it was the airport, waddaya want?

That pancake looks like a freaking cheesecake (delicious!). I was feeling crappy on Sunday morning so my husband made me breakfast in bed. It was just a big plate of bacon, and suddenly everything looked rosy again.

I love those greasy little squares at Sammy's, especially with hamburger.

Will you leave your husband, marry me, and make me pannekoeken? I would be SO grateful.

I've gotta say, I'm a powder mac and cheese guy. But, I can look past that if I can get a recipe for those exact "pancakes" that are pictured.

I had no idea they were still open! They closed most of them in the TC due to bad hygiene and their awful habit of poisoning their customers. After the SIXTH outbreak of Moctezuma's revenge (affecting 27 people), they finally closed down the one @ Burnsville Mall.

I just found this delicious post after perusing hundreds of Google pages pertaining to your debauchery (before I ever laid eyes on your sexy red toes you've teased me with lo these many years since). But I digress...

I'd like three eggs over medium, an order of those floofy pancakes, three links, 4 slices toast, biscuits & gravy, a hearty man-size helping of that Kraft cheesey stuff, hash browns, 3 Coke Zeros, a Vitamin Water, and a coffee. You can have my bacon. Because I love you.