Kids, this is what happens when you dare to garden. Heed the warning. 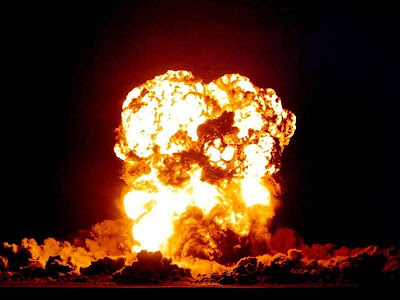 
Eyewitnesses report seeing Ms. Winedrinker watering her garden looking quite unwell from the heat. According to sources, in the next instant, she exploded- apparently from alcohol-laden sweat combined with intense heat from the afternoon sun.

Explosives experts are on the scene and are attempting to piece together how this tragedy unfolded.
WCOK's own reporter, Harry Backbrush, is on the scene with this report:

"We're here at the Winedrinker residence and all I can say is 'wow'. This is utter devastation. It seems Ms. Winedrinker was not aware of the deadly combination of alcoholic sweat and 95-degree heat."
"I've been a reporter for 19 years and I can say without hyperbole, this is the worst disaster I have and could ever possibly see in my whole life, even if I lived to be 112. The street is strewn with perennials, cheap flip-flops and pieces of hose. It seems Ms. Winedrinker herself has been completely annihilated. We see no trace of her other than a dried patch of salt- presumably from the large pool of sweat that is believed to have caused the explosion."
"Neighbors say that Ms. Winedrinker was an angry woman with few friends on the block, often yelling at the local children and calling the authorities on loitering teens. They say, judging by her recycling, that she could, and I quote: 'drink like a sorority girl on spring break'. It appears Ms. Winedrinker's husband was inside sleeping at the time of the incident. He released only this comment: 'Damn. We were going to grill tonight.'
One can only assume the depth of his greiving."

"Efforts will continue throughout the day to clean up after this disaster and try to make sense of what events led up to this tragedy. A concerned group of local citizens has already begun a campaign to ban sweat glands. This group calls itself 'CACS', or 'Citizens Against Combustible Sweat."
"CACS has already drafted a bill to go before Congress requiring all Americans to undergo sweat gland cauterization, a painful but highly effective procedure to stop humans from sweating. The group's president, Harvey Boardinbum, says that, 'If we can stop just one person from falling victim to this sort of tragedy, well...it's all worth it."

'Damn. We were going to grill tonight.'

You are just TOOO funny.

I've actually been desperate to get outside. It seems silly, but my office is 67 degrees. I've been wrapped in a giant ugly sweater all day, wishing I still had hot chocolate packets here. I get outside and it feels like a blanket. Sweet, warm blanket. Until my drive home, that is, when I have sweat actually dripping down my back.

thank you. i needed the laughs. and its definitely an effing oven out there today.

sorry kids, no playing outside after work...we're heading inside to watch a movie. if we play outside mommy will melt. and not in a good way.

Hee hee. Your name generation is a hoot.

Alcohol + excessive heat/humidity = ick. In all seriousness, I hope you're feeling better.

It's even brutal up here, and has been for the last five days. No sleep makes Maurey cranky all day long. I actually had a RED BULL today.

I should commit crimes with my feet. I'm pretty sure I burned the prints off my toes this weekend as the flagstones around our pool were about 210 degrees on Sunday.

Does anyone else smell Sizzlean?

Everything else I forget, commercials, not so much.

You're so funny I had to call my Mom and read this one to her. Nicely done.

WM. You're crazy. Absolutely crazy. Thanks for, um, being crazy. Seriously, this is so funny. Do you sit around all day thinking up funny names? Or do they just come to you?

I wish I got WCOK news. We're basically stuck with WSHT here. And make sure you keep an eye on the CACS. Sometimes, CACS try to screw you over.

I'm glad the reporting in your neighborhood is completely without hyperbole.

Sorry about the explosion. Is there an address I can send my CACS contribution to?

Girl, you are delightfully insane, and I mean that in the best way possible. :)

Oh NO! We'll miss her terribly.