I'm feeling discombobulated and random today, so that's what I'm dishing up for y'all.

As a food "professional", I rarely use recipes, nor do I need to. This particular skill has resulted in a stunning lack of effort in our daily meals as of late. We are on a regular rotation of "Taco night", Morningstar Farms fake Buffalo wings and a salad, Pizza that I cook via handing the delivery driver a handful of cash, Frozen organic burritos or leftovers in any combination of the aforementioned items.
So...I'm actually using recipes every once in a while to get back in the habit of experimenting with new flavors and such. The other night I wanted to try a recipe out of one of Rick Bayless' books, which the Mr. gave me at xxxmas as what I consider to be a silent plea for better dinners. I took mental inventory of what ingredients I had, and I settled on enchiladas with potatoes, carrots, chicken and an interesting sauce with ancho chiles.
Now, obviously I know what I'm doing when it comes to food. I can brag a little- I'm a very good cook. I don't think I've killed anyone with my cooking in at least 6 months, and they never actually proved that I mixed up the powdered sugar and the Comet Cleanser that one time and I have the court records to prove it, dammit. 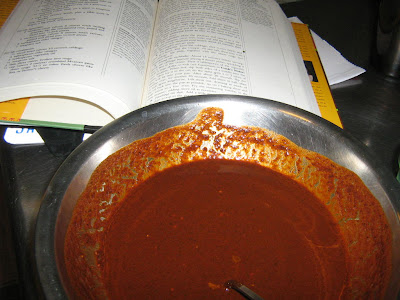 This, my friends, is what evil looks like in sauce form. So. Bitter. I expected it to be somewhat on the bitter side of things from the ancho chiles, and I actually like some things a little bitter (like my cold, hard, heart), but this sauce was so wrong that I would have to make up new words to adequately describe it. "Sneedenblahg" comes to mind. 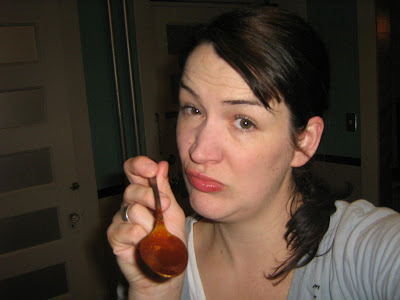 Never a quitter, I set to work to repair the saucal deformities. I added a bit of sugar, a bit of honey, some balsamic vinegar, some lime juice, the sweat from a newborn's brow and a bit of olive oil. Much better. Once it was incorporated into the final product, I'd say that it was actually pretty freaking delicious. I just feel bad for anyone making this who may not know how to "save" things when cooking goes horribly wrong. Sorry- I forgot to take a picture of the final product, but trust me when I say it was the most magnificent-looking platter of food ever to be seen by human eyes in the history of the planet or any other planet that supports human life. 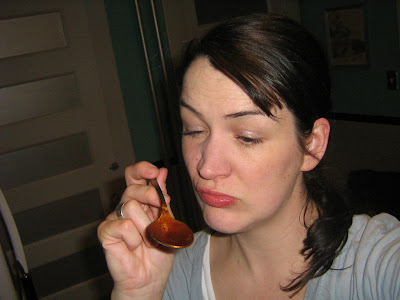 Trouble, sitting amidst the wreckage, plotting when he will next step in his own poop and run around the house, me chasing him with cleansing wipes (turns out that day was yesterday.) 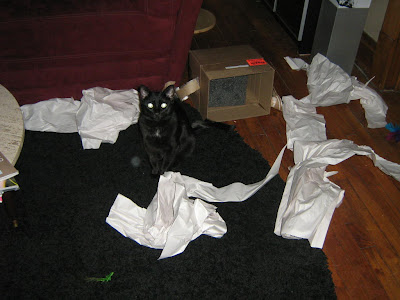 My designated popcorn bowl. I don't know why I felt the need to take a picture of this. I paid a dollar for it 15+ years ago. I make my popcorn the same way every time: dry-popped in the microwave, drizzled with extra-virgin olive oil, fresh ground black pepper generously sprinkled on, and a liberal dusting of parmesan cheese. No butter, best popcorn ever. 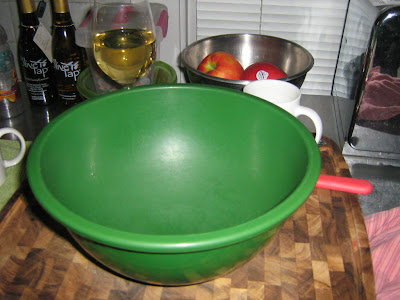 Two days after I bought this nectarine, unripe, this is what it looked like. I hate winter produce in MN. 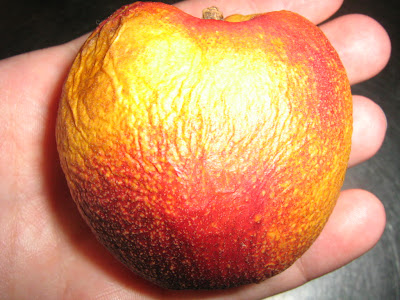 Why everything I own is covered in cat hair. 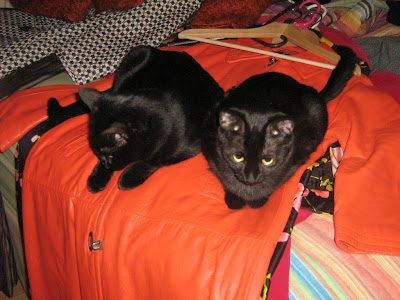 The end.
Posted by Whiskeymarie at 1:14 AM

I only started adding sugar to my red sauce about a year ago and it makes it totally delicious.

I'm waiting anxiously for an opportunity to use the word "sneedenblahg." Fingers crossed!

A pet dragging poop around the house is an everyday event here.

I keep hoping covered in cat hair will become the new black.....

I had spaghetti today. They were good. But I wish I could've had fake buffalo wings or a delivered pizza. Oh boy. But I will try your popcorn recipe, sounds so delicious!
Who buys nectarines in January?!

Um, I'm a little worried that you added bit o'honey to your sauce.

But you're the professional not me.

(ok and yes I do have too much time on my hands, thanks for asking)

And is that a lovely riesling resting in the glass just beyond the green popcorn bowl? If not, I'm genuinely curious as to your wine 'favorites.' Do share, please!

A photo of you in your Hellraiser coat cooking that evil sauce would have been cool. : )

Oh, and your popcorn bowl is my cereal bowl.

Your casual ease with spices is what I aspire to in the kitchen. As of right now, I've only gotten as "this needs... something. Let's put cumin in it."

Okay, so I guess there are actually advantages to being allergic to cats.

I suspected that food professionals mostly subsisted on fast food and frozen dinners.

If I got a microwave I wonder if I could figure out how to make "real" popcorn in it. I make popcorn in a pan on the stove. Then put yummy stuff like salt and nutritional yeast and hot and spicy spike on it.

Mmmmmm...popcorn...I told the hubster I would plan dinner for the family tonight. I believe my plan is complete!

My verfication word is "couna" If that were a word, it would have to be antithetical to "Sneedenblahg"

Wait. You mean I could have saved that nasty sauce I made last Tuesday if only I'd squeezed my infant son's forehead over the pot? Dammit!!

I have a very special $1.00 popcorn bowl. It's fugly. But perfect. I like lawry salt and cavendars greek seasoning on my popcorn.

I feel like what happened to your nectarine is what winter does to my face...that's not normal, right?

please never show me that nectarine again. thank you!

Hey, I've given you a "Premio Dardos" award -- check it out here if you would like to accept the award:

Even if you don't want to play along, know that your blog is fun and fantastic.

I've made this sauce before too, and I agree. It's pretty gross. His guacamole, however, is to die for. I eat myself into a coma every time I make the stuff, especially when I've taken the time to fry my own chips. So very worth the lbs.

btw, my word verification is feakky. I laughed.

I haven't been really hungry for a couple weeks and have been surviving on a diet with chips and cookies as the staples so even that nectarine looked good. Send enchiladas, por favor.

Also? One time I floured pork chops with powdered sugar out of an unmarked cannister. They were not good.

And I have a hard time with nectarines any time of year. I am convinced their ripeness window is only about two hours long, and it almost always occurs when I am out of the house.

You're the 'Comet Cleanser Ciller?' (Acquited)?

I had no idea.

I hope you didn't eat that nectarine. Or if you did, I hope it gave you super powers or something like that.

I have that same cookbook and I LOVE it.

Try the rice with poblanos, corn and cotija and you'll pretty much never want to eat rice any other way.

I crave it fortnightly.

Okay, how do you dry pop popcorn in the microwave?

Dude. I am now questioning my faith in RB. He is my cooking idol, but now I'm worried...

Also, I have totally been copping out with a bi-weekly taco night. And tostada night. And burrito night.

I'll have to keep an eye out for that recipe in my Rick Bayless books. So far, everything I've made of his has been fantastic.