Instead of having a life where I actually leave the house and get out and do things with actual people and have a social life, I was ONCE AGAIN toiling away on "Operation Fix this Fucking House" much of the weekend.
I did get out for brunch at the Triple Rock today with my gal Blondie (fried egg sandwich for me with veggie sausage), and I met my other gal Waffle at the Place for fun in your life for shopping and dinner on Thursday. So, if that counts as a social life, then woo. hoo. I'm a freaking rock star.

Today I was prepping the dining room for painting, and in doing so I had to push all of the furniture to the middle of the room. I decided to dust off the old Victrola and put on a few of those new-fangled "record" thingies that all the kids seem to be so keen on these days.
We actually have two record players- the old-school one pictured here where you can "stack" the records to play in order, much like a CD changer except scratchy and with a lot of groaning and whirring and clicking in-between records. Our other one is a regular turntable (not two, no microphone) that I bought in 1991. 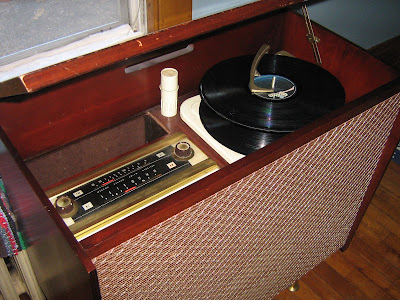 Wanna see some of our LP collection? Sure you do!
C'mon- it's schizophrenic and odd and slightly disturbing. exactly what you'd expect.

This is only a small sampling of our collection, which is constantly being added to as I find new and interesting oddities at garage sales and thrift stores.

First up is what I stacked on the old record player to listen to while I washed walls and taped the trim, all side one: 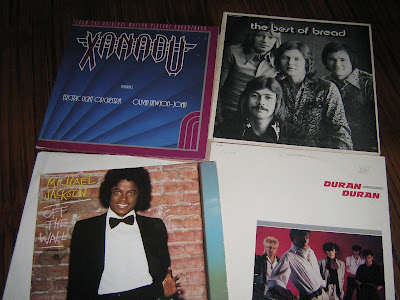 I knew the words to each and every song in that stack, and sang them loudly to the kitties who spent much of the day hiding under furniture in the hopes that I wouldn't see them and continue the serenade. I LOVE Bread, the band. "Everything I Own" makes me tear up every time I hear it. It's very moving when I cry and sing at the same time. You should see it. The DD album is the first one they put out. It's the one with "Girls on Film" on it. Me-ow.

We also have an extensive collection of Sesame Street and Muppet albums. I'd like to blame the Mr. for this one, but some of them came with my dowry. "Grover sings the Blues" is AWESOME. Most of the collection is pictured here, but not all of it. The David "Daydreamin' on a rainy day" album is in a frame in the Mr's office: 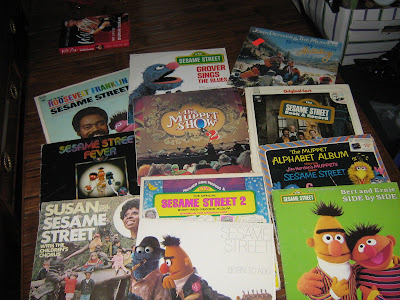 Anyone else remember Slim Goodbody? I do. I don't remember him being as creepy as he is here, but I will give him points for his glorious honkey 'fro: 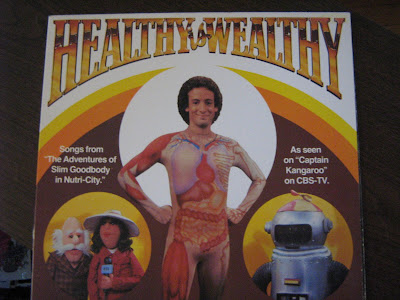 I take NO responsibility for these next albums. However, this may give y'all some insight into the mind behind the man I live with and with whom I knock of the boots: 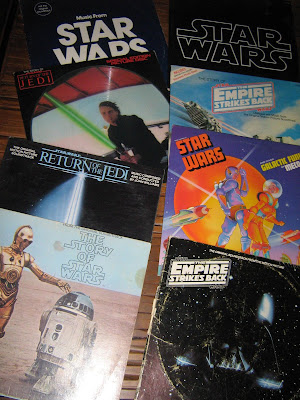 How sad for me.

We also have a decent amount of "crap rock" or "butt rock", depending on what part of the country you're from. We have listened to that Survivor album way more than I should admit to. Ditto the Asia and Boston albums. We bought them in the Heat of the Moment, I guess: 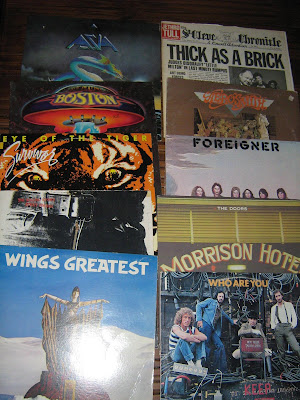 In the "oddities" category, we have quite a selection. Here we have an album by the critically acclaimed band "Leatherwolf", as well as a demo album for the Hammond Organ model #X-66. Oddly enough, the Hammond album is fun to listen to. Also here- the Fat Albert Halloween album, "Pac-Man Fever", a Kojak album (with book), the Slim Whitman 15th Anniversary (Of what, I've never figured out) album, and an album by the McAuley Schenker Group who, I believe, are Canadian. 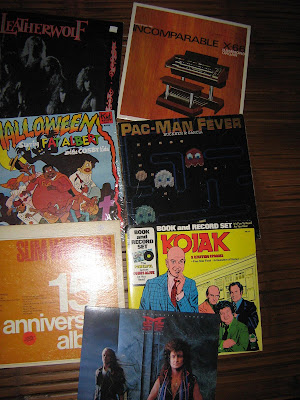 Two, yes TWO Hall and Oates albums. The one on the right has Daryl and John's sisters on the cover. 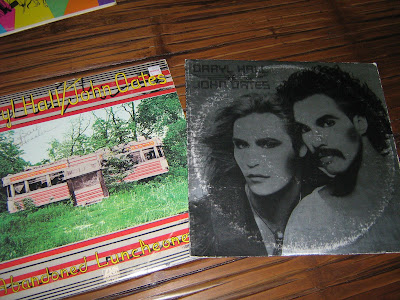 Oh, and the gayest record sleeve EVER on the inside: 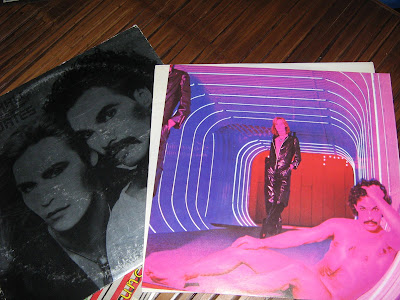 When I was a punk rock girl, I was obsessed with this anarchist punk group from England called Crass. I bought a bunch of albums and thought I was edgy. I still think the albums are really good, and they fold out into posters- perfect for the pseudo-anarchist girl from small-town Minnesota to put up in her bedroom to scare her Mom. 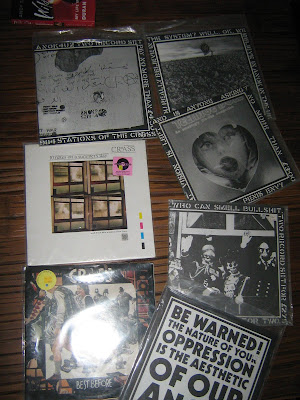 This one is still appropriate today, 20 years after I bought this album: 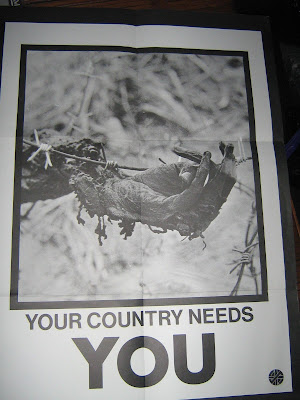 A little bit of everything here- Iggy Pop, Ryuichi Sakomoto, the Germs, Bronski Beat, the Dickies, Alison Moyet, the soundtrack from the first "Decline of Western Civilization" (the punk one), some Coil (creepiest cover of "tainted love" EVER), some Queen, Skinny Puppy and Pig. Kind of a potpourri of weirdness here: 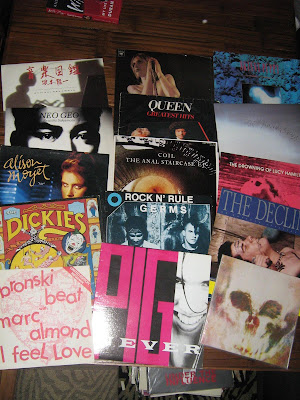 The back of the Dickies album. It's called "Killer clowns from Outer Space" (yes, like the movie.)
You'll note that they also do a cover of the song "eep-opp-ork (Uh,uh)" from the Jetsons. I freaking love the Dickies: 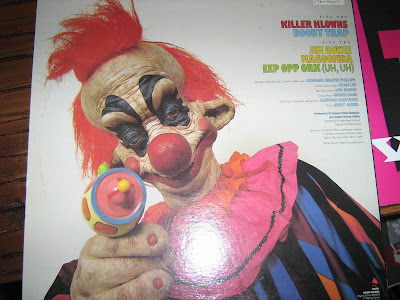 I also have a rather impressive assortment of K-tel/Ronco albums from the 70's/early 80's. These were collections of current "popular music" put out by these companies. The funny thing is, when they couldn't get permission to use original songs, sometimes they had terrible covers of often terrible songs. Hi-larious. I love the artwork on the albums: 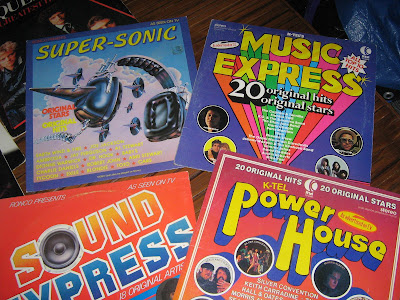 I listened to "Super Sonic" today, and I was surprised how many of the songs I knew all of the words to. I changed the words to Dr. Hook's classic to "When you're in love with a beautiful Pooter" for my cute furry girl, and I sang it to her very loudly. Oddly enough, I think she knew it was a serenade and she just sat and listened. We're now afraid that she may be either deaf or retarded because no one would willingly sit through that crap.
"Knock on Wood" is easily in my top three favorite disco tunes of all time, and once I got extra credit in Spanish class in high school for translating "The Devil went down to Georgia" and singing it to the class with my friend Blondie. 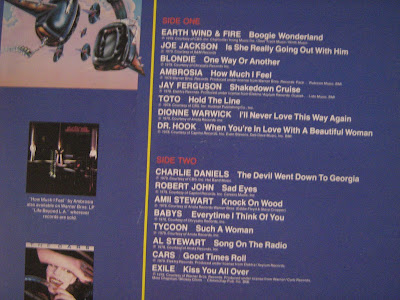 "Operation fix this Fucking house" aside, it was a pretty good day overall. I shook my booty, I sang a lot (loudly) and I got a few things done.

Not bad at all.

XO
Posted by Whiskeymarie at 5:40 PM

So you really did have the Killer Clowns from Outerspace. Also, love seeing the Off The Wall as well as the Boston. As for the Doors, that was my main group in 11th grade.

And here I thought I was weird and unique for having the John Denver and the Muppets Christmas album...

oh man. if there is one thing my relationship has given me, it is an appreciation for bread. "i wanna make it with you" ... best. song. ever.

Any chance I can come over and play my KISS "Detroit..Rock City" 45?

Yeah, I have to agree with lvgurl -I'm really quite overwhelmed. I didn't think ANYONE remembered the K-tel compilations. I had quite the impressive collection myself and wish like hell I still had them. I seem to remember Whip It and Pop Muzik most of all. Besides that, I share pretty much your taste exactly, except I was never cool enough for real punk. And for full disclosure purposes, I also will admit to having a Star Wars album. John Williams rocks my world. Again, with the not being cool.
I need to remember that when I have a daunting home project to complete music makes it so much better.

If I was cool, I wouldn't know that that is a quote from The Empire Strikes Back....

I also wouldn't be wondering if it somehow made it onto the album as some sort of background sample...

An, a quandry to ponder.

Wow - Check out the thorax on that Slim Goodbody.

I believe I saw Aerosmith's "Toys in the Attic" in that "Crap Rock" pile. This must be a mistake. Please place that elsewhere - they didn't become crap rock until around 1991 or so.

oh to only have my vinyl still... however the wicked witch saw fit to trash it all!

This post makes me sad. I lost all my albums in the flood of 93 (aka when the pipes burst in my moms condo storage where they had been stored when I moved across country)

If I wasn't so sad I might tell you about how my albums might have kicked your albums asses. I had everything from Mister Mister to D.R.I.

I don't even know how to respond to this.
I feel so musically inadequate.

Wildly impressive showcase of
vinyl. What's the value of a collection like that?

I still have my Olivia Newton John album "Let's get phsyical". SA-WHEET!!

I've had Muppet Show songs going round and round in my head for decades. Highly underrated.

I remember Slim Goodbody! I just don't remember him being quite so terrifying.
Though, not as terrifying as Oates naked. Ewwwwww.
Honey Bunches of Oates? I think not.

Totally down with Toto.

I love you for your Muppets.

(haha! word verification: imakp) (guess what? I poop too!)

SHAKING IT to bad rock music is required while you 'fix your fuckin' house'. Trust me - my overalls and I are familiar with about seventy percent of your collection.

You have a great collection. I use to have so many of those records, but sold them years ago. Makes me a little sad now.

Ugh--the Slim Goodbody picture reminded me of a nightmre I had when I was about 7. I dreamed I was at a birthday party, and suddenly Slim Goodbody showed up and started waving an anatomically correct fake wang in everyone's face.

That is one impressive album collection--but I'm not surprised. What else would Whiskey have?

Oh, Crass. Because songs where Brits just chant "Fight War, Not Wars" seems like a good idea in theory, but then you listen to them.

I haven't been this jealous of you since yesterday.