I'll talk about poo and drunken antics tomorrow, I promise.

As usual, I'm a big, fat liar.
I found a few more Thanksgiving pics. Nothing too exciting, but since I'm scanning and posting my life in all of it's questionably glorious glory here on the in-ter-nets, I thought I'd give 'em to y'all.
Tomorrow's the big day, and I figured that maybe a few of you could use some place setting/decorating tips and a little trip down Whiskeymarie Memory Lane (mind the speed bumps!)

This was my Grandma's house. We usually rotated T-day and Xmas between hers & ours. This is the spread all laid out in the dining room: 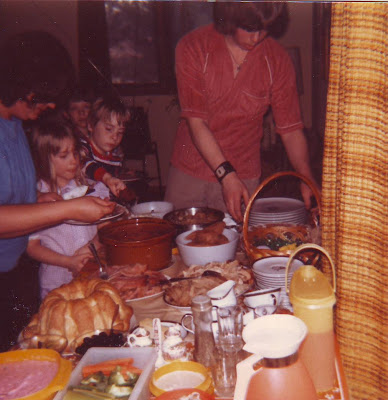 And no, that is not a bundt cake. That is my Grandmother "fancying things up a bit" by baking the frozen bread dough in a bundt pan. You'll also note the pitcher of "le Kool-aid" on the table for the youngins. We actually did use china this year, my grandma's china was surprisingly lovely- plain white with a platinum band and a simple gray/silver rose in the center. For a lady who grew up in a house with a dirt floor, she could really surprise us when she classed it up.

The lady in question: 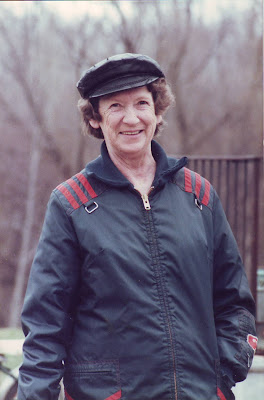 She was a hoot. Coarse, yet sweet as pie. Funnier than hell and a no-nonsense attitude- that lady didn't fuck around. She didn't lie, and she could cook like nobody's business. As you can well tell, she and I were two peas in a pod. I miss that old broad.

At her house, you had two choices as to where you could eat: The kitchen alcove or the living room. Everyone wanted the kitchen.
The house had a little alcove that had a table and two long benches to sit on. I liked sitting in there so much (and not getting stuck in the living room with Uncle Bob who made so much noise eating that I often thought I was eating with an elderly wild boar) that I would often stake out a spot, then I would wait until EVERYONE had filled a plate and sat down before I'd shimmy under the table (the only way to get out) and go to fix a plate and hope that there were still marshmallow yams left. 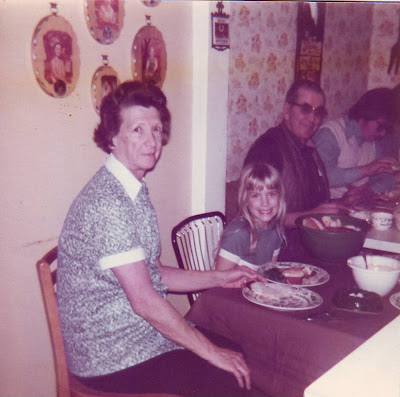 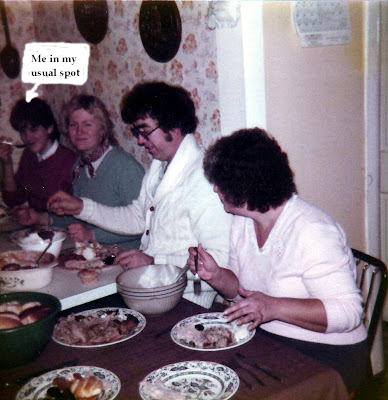 (Mom & Dad were sporting matching honkey 'fros that year, as you can see.)
I loved that spot at my Grandma's house. It was where the dishiest and most interesting conversations took place. It was where loud, heartfelt and often ridiculous arguments happened, and it was where I learned a lot of my family history.
It was where, one Friday the 13th, the adults played card games until the wee hours of the morning, not realizing that the kids were in the living room watching a "Friday the 13th" movie marathon. I think I was 8 or 9- I didn't sleep well for weeks after that. For a kid who lived waaayyy out in the boonies who went to an old-school totally-what-you-see-in-the-slasher-movies summer camp, watching three gory movies based in those same settings freaked my shit out.
Good times.

This is my favorite picture of the alcove- it was taken before I was born, but is pretty much exactly how I remembered it, minus the happy people that were always around it: 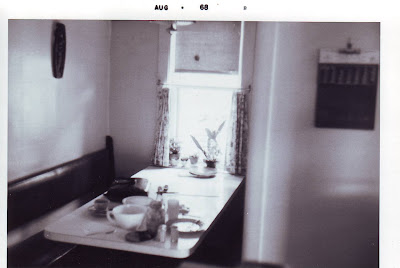 I miss having that spot to go to.
In their later years, I could always count on walking in the front door of the house, my Grandma perched on her stool in the kitchen by the coffee maker (always on and always full of very weak Arco coffee), my Grandpa sitting at the end of the table. I usually walked in mid-argument with those two, as a day didn't go by for them without bickering. Honestly, had they not been bickering, we all would have wondered what was wrong with them. They taunted each other, they made fun of each other (my grandma started doing impressions of how my Grandpa talked funny after he had a stroke- most people would think this is mean, but he laughed every time she did it), and both of them were always right about whatever it is they were "discussing", even when they both were totally wrong.
Grandma would pour me a cup of coffee and offer up some of her perfect carrot cake or chocolate chip cookies (she always had one or both on hand), and I'd plop down at the table and join in the conversation, which generally turned to "when are you going to have a baby?" the minute I walked in the door.
Sigh.
Good times.

I don't have that place to go to anymore, but I have these pictures, and I have the stories. Oh yeah- and I have plenty of family secrets that I learned sitting there nicely tucked away. Sometimes it pays off to shut up and listen.

I hope you all have your "place", or at least that you someday find it. Me? I hope to have one again someday. Maybe at my house, maybe somewhere else.

In the meantime, could someone stop my parents from manhandling each other at the table? It's kind of skeeving me out: 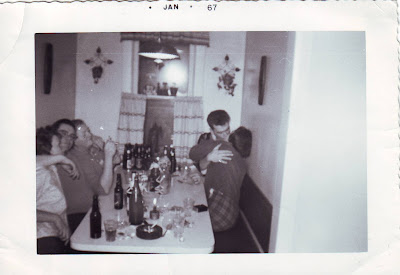 I like your grandmother. Mine's a tough old broad, too. Is the blond next to you a sister? There's a very strong resemblance. Happy Thanksgiving, Whiskeymarie!

Awww, I love this post WhiskeyMarie!! Hell, *I want* to go over to your grandma's for Thanksgiving.

I love the little alcove. That picture evoked so much emotion in me, I can't even believe it. What a special special place. And what wonderful memories...

omg, I'm such an emotional wreck these days... I'm just so thankful you shared this with us.

And Happy Turkey Day to you too, you little turkey!

I propose that when they greenlight the epic motion picture "Never What You Think It Should Be: The Whiskeymarie Story" the part of your grandma will be played by Cloris Leachman.

That was an excellent post. Tomorrow I'll lift a glass to your grandma and tough old broads everywhere.

1. The way you described your Grandma is how I hope to be described when I'm old.

2. I'm still looking for my place. Posts like these make me hope I find it soon.

Here's hoping the turkey isn't the only thing stuffed at your table tomorrow, my sweet, sweet sister from another (saucy) mother. Love you!

this was the most lovely thing i ever read. i feel like part of the family now. *asks for money*

Well, after this, I'm ready to turn my back on my family and join yours, and not only because yours have sweet 'fros. I will fight you for the booze, however.

Grannies who make fun of stroke victims are the best!

Damn Whiskey - you made me cry.

Your post reminded me so much of my Nana who had this amazing farmhouse and would make pies from the blackberries we would pick. I have so many special "places" in that house. And so many fond memories of her there.

She passed right before Christmas in 2005 and I still don't have the heart to delete her number from my cell phone. I keep hoping one day I will dial and she will answer me and tell how it will all be ok and how much she loves me.

Thanks Whiskey for reminding me of special times. Happy Thanksgiving to you and yours.

I'll love your dad's Chops....I wish I could grow the chops and some handlebars....but I have a puss face

Your Dad's sideburns are great. :)

1. I didn't think Minnesotans said "y'all" Jesse The Body never said "y'all."

3. Did you play Chachi on Happy Days?

5. LOL. Mom & Dad. I see where you get your delicious salacious deliciousness.

6. The Happiest of Thanksgivings to you and yours, Whiskeymarie VonPartypants. : )

If they didn't spend time man-handling eachother there'd be no Wiskeymarie and how sad and empty the world would be without her.

Lovely post ma'dear... And yes, I've settled in at our Thanksgiving holiday place and plan to pack on lots of ooey-scrump-dilly-icious calories before this week comes to an end.

Next week I'll just refer to as 'Wide-Ass-Waddle-Week'

I'm glad I'm not the only sucker who cried over that one.
My grandmother passed away a little over a month ago and Thanksgiving was her favorite holiday. She even loved that damn Macy's parade, so tomorrow I'll be watching it in honor of her.
My wish is for all of us to find our place.

movin' down the road said...

Gosh, I love the photos. I was just watching old film from my childhood and my mother's childhood, of the holidays and such. I have to dig up the photos now!

You've been tagged with the *fabulous* award. If you feel like accepting, check it out here:

You always have the best family photos. Happy Thanksgiving.

Build your kitchen alcove and I'll plant my ass there to gossip or simply listen...

Happy Thanksgiving to you and to your family!

I miss my Grandmother and her delicious meals. She too was secret keeper and her home was my safe haven. Life hasn't been the same without her.

Here's to having a wonderful Thanksgiving without the tough 'ol broads.

Well, love the photos, hope to find some of mine tomorrow but not betting on it.

I know you were thinking I dropped off the blogsphere but I am just coasting on clouds for the time being.

So far loving the new house. Haven't figured out the Soda Fountain set up yet.

Hoping to catch up with all I missed on your blog while things are simmering, boiling and maybe even burning. What? I'm not a cook but I pretend to be at times :-)

Happy Turkey Day. Be Thankful you wont have to eat what I prepare.

I am thankful for the existence of honky fros.

Why haven't you even mentioned that your dad was Elvis?

ok. cried a little. beautiful. all of it.