Bless us oh, McGone*, and these thy gifts which we are about to receive... 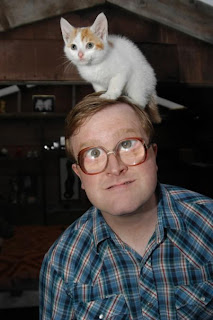 We did some shopping for the house this weekend and everywhere we went was packed. We had to go to IKEA, and you would have thought that they were giving away non-defective newborn babies for how crowded it was. The whole place reeked of Swedish meatballs, sweat and panic. I may have slipped on an unfortunate shopper who had been moving too slow and was trampled into goo by the credit card-wielding masses, but I was too focused on getting my Grundelhooger shelving unit and Trunsplatz garbage can to bother to look.

Here in Mpls/St. Paul, Ikea is directly next door to the Mall of America so it's TWICE THE FUN TO GO THERE, PARK THERE, AND TRY AND NOT KILL PEOPLE THERE.
Cars! Everywhere! It was pretty much pedestrian pinball just getting into the parking lot.

Oh, and that same day we had to go to a store near Rosedale, yet ANOTHER mall that was crawling with lovely, pasty, bargain-crazed Midwestern folks- kind of like Old Country Buffet on "Steak night".

The Mr. and I braved through this festering pustulance as best we could, and we even managed to not vomit at Pier 1 as Xmas music was blaring from the heavens above/the ceiling tiles as we searched in vain for an end table. We left empty-handed and humming "jingle bell rock" against our wills. We are considering experimenting with hallucinogens the next time we are forced to go shopping anywhere near a mall on the weekend. Any suggestions?

This song pretty much sums up how I am feeling about christmas already. Sung by my boy Bubbles, from the show Trailer Park Boys (pictured above- he loves the kitties too). If you haven't ever seen the show- you need to do so.
You can thank me later:

*In honor of our new lord and savior, McGone. Praise be to the keeper of the swine.
Posted by Whiskeymarie at 7:42 PM

My letter to Santa reads:

I never heard that song but I love it.

Please give Whiskeymarie whatever she wants this Christmas, no matter how blasphemous she has been. She may be on your naughty list, but that's why we love her.

You are brave for shopping on Veterans day weekend/deer hunting opener. All those women, rabid to spend money. I am quite serious when I say that on this weekend last year, I almost clubbed 12 appliqued sweatshirt-wearing ladies at Herberger's in St. Cloud.

DEAR GOD! that means I'm having this kid before then. I don't think I have it in me to celebrate Christmas this year.

As someone who's never been up in your neck of the woods, I have this unnatural need to visit the Mall of America. Someday, someday. In the meantime, I noticed the first Christmas commercial the other night, the one for the Garmin, where they sing that horrible song the whole way through and now it'll be in my head until February.
Lastly, my secret to Christmas shopping: 1/2 Xanax + 1 glass of wine = Who Cares About The Crowds, Look at all the Pretty Shiny Things! Just be careful you really limit it to one glass of wine, or weird things start to happen. I made that mistake one year.

I went to a mall this weekend to pick up a birthday present, couldn't find a parking place, so I turned around and went home. I have no tolerance for mall crowds- maybe I'll have to try the xanax/wine combo!

Last year, I managed to do all of my Christmas shopping without once setting foot in the mall. Hopefully the Internet and Target will be my saviors once again this year.

I worked retail one year where I had to listen to "The Chipmunks" singing Christmas songs for three months straight. I felt like I was being driven to psychosis every single day as I peddled bedding and folded towels. It was the worst.

What is with the crowds in malls right now? Haven't these people heard about the financial crisis?

Okay; this is now my absolute favorite X-Mas song eva!

Oh; and I'm with punchlinewalking: Xanax/Wine combo is the only way to shop!

hmmm....... it looks like you need some early Christmas inspiration! Christmas Shopping

Many years ago (1993) I worked in the MOA. The Holiday Season was hell on earth in those parking lots. I used to get to work 45 minutes early and troll around trying to find a space. Then they instituted the rule that all mall employees had to park in a parking lot blocks away and get freaking SHUTTLED over to the mall, then SHUTTLED back when our shifts were over. Yeah, that was fun in sub zero weather.

Our local lite station has already begun playing Christmas tunes 24/7. The kids love it though.

There is a fucking ridiculous Christmas light display about a mile down the road from me at a local business, that's been up for a couple of weeks now. There's even a GD radio station that corresponding music. yeah. It's a "consultant" office, and the dude has his own parking spot by itself, in which there is usually a Ferrari, Lamborghini, Mazerati, or a couple of different Lexus-es (Lexii?) puke. Though I do have to admit, I like looking at cars that cost more than I'll net in my lifetime.

Also, Trailer Park Boys, hilarious. I watched the movie a few months ago. It was funny. The guy that brings his rum and coke everywhere (Julian I think), is awesome. I might have to try that for myself. Jack instead of rum, but same basic idea.

Aren't all babies defective? I mean, who designs anything to crap on itself?

Mr.OM and I have thus far escaped Xmas music. I'll tell him we have to stay clear of Pier 1 until further notice.

I'm sorry to hear of your horrendous experience. I like to go to Ikea at 7pm on Tuesdays. No babies then.

Holy shit that video was funny. And during the crazy shopping trips those are my sentiments too.

I heart Bubbles and you just reminded me on how far behind we are in watching this years season. I just mentioned to my man that he needs to get on it and get those episodes... pronto. The only problem is that I can't ration myself and end up doing a marathon. The show's kind of like Lays Potato Chips to me.

You made me smile, WM. Just what I needed.

No way could I handle Mall of America crowds during holiday season.

Well, maybe after a bucket of margaritas...nah. Not even.