Giblets, and all things giblet-related.

I realized this weekend, as I was looking for Thanksgiving pictures (and found exactly three) that people don't take a lot of pictures on the "feast of roast bird". Well, at least in northern MN in the late 70's and 80's in my family they didn't.

I have buckets of pictures from christmas, birthdays and Halloween, but the holiday centered around eating until we bust a vessel and Uncle Bob drinks too much Lambrusco and starts a fight with Grandma about who was more poor in the depression and then everyone falls asleep in front of the TV which is showing a "very special" Facts of Life?
Nope.
Nuthin'.

Here's what I've got:

For a few years, we raised chickens, turkeys and piggies. this meant that out T-day gobbler was "fresh from the farm", so to speak. This is a picture of the Turkeys we had in 1980, which was a good year compared to the year that I accidentally left the door to the coop open once and all of the turkeys escaped and were subsequently killed by our dog. That was a sad thanksgiving indeed. And, in case you're wondering- dog tastes nothing like turkey. Nothing at all. 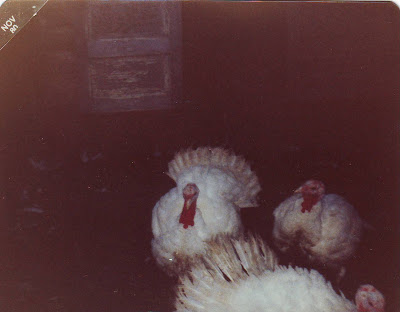 Gobble Gobble.
And no, we didn't name the turkeys. They were kind of mean and we (read: me) were scared of them. Angry, pecking little fuckers.

Ours was not a Hallmark Holiday Special sort of Turkey day. We did not get dressed up, we didn't pull out the best china, crystal and silver. We didn't give Manuela, our maid, the day off and have a good larf over the fact that we accidentally put the lobster fork next to the grapefruit spoon whilst setting the table.
No, we pretty much just slopped everything in mismatched bowls, dropped it on the table and got the hell out of the way. 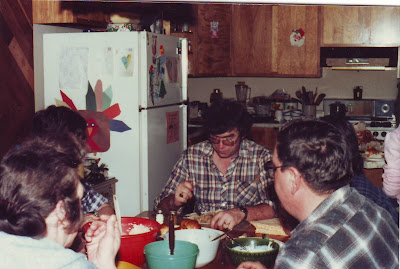 But as you can see from the fridge, we went all out with the decorations.
Oh, and you can also see that my Dad ditched the mustache that year, but kept the Jeff Lynne-esque glasses.

Finally, this one is from the year my Mom decided that we should all sit at the same table and eat like civilized people.
All I remember about this year is that conversation took an ugly turn (being that we were all forced to sit and look at one another while eating), and screaming ensued. This may have been the year that my Grandma and Grandpa were yelling at each other about who directed "Gone with the Wind". Years later, when I bothered to look it up, I realized they were both wrong.
Good times. 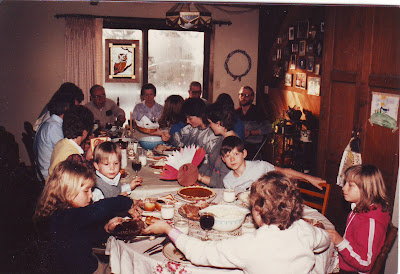 And yes- the children are drinking wine here. We had a very "European" approach to things at the VonPartypants household. children drank wine (grape juice), many "pommes frites" were consumed, and our dog was named "Oui" (Wee).

You can see that once again no expense was spared where the decorations were concerned. Only the finest paper turkeys graced our table.
The year after this we totally kicked it up a notch and put one of these at each "place setting"(paper plates & plastic silverware): 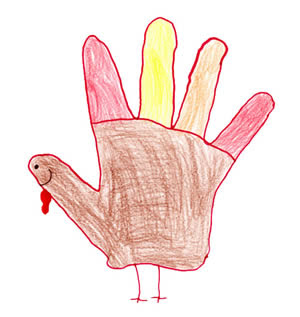 Put THAT in your pipe and smoke it, Martha Stewart. Hell yeah!

I can see from the life-line on your hand, you're going to live a long life.

But...the size of your index finger says that you're going to eventually have gout.

Poobomber is such a clever turkey!

I'm afraid of turkeys, too- living or dead.

Turkeys are nasty, almost as nasty as geese. Your kitchen looked like ours did. We were a klassy family, too.

We'd use "the silver," but we didn't really have that much of it, so we'd always end up with mismatched bowls and little Sesame Street utensils to eat with. Classy.

My grandparents had some asshole turkeys that scared the shit out of me chasing me across the yard. Bastards. (Er...the turkeys, that is, not the grandparents.)

I got attacked by chickens once when I was a paperboy. Scary stuff.

I'm assuming everyone at the table said they were thankful for that magnificent Carter-era woodworking in the house.

Ah, Ms. Partypants, you had me at "giblets". The rest of that beautiful post was all delicious gravy.

I absolutely love your childhood pictures. I'm sure all our dads wore those plaid shirts (my dad's shirts had the fancy snaps instead of buttons, oh yeah).

I like the fridge turkey and the cabinet Santa head.

These picture posts makes me very nostalgic for 1970's upstate New York, which look very similar to 1970's MN.
We too had the dark brown/harvest gold/avocado decorating schemes going on.

I love your hand turkey!!

Jealous doesn't even begin to cover it. Although we did sometimes have guns at the meal... not used, but they were there.

Turkeys ARE mean! And when they bite you it stings like a sumbitch.

Your holidays growing up sound pretty much like ours. Well, the turkey days anyway. It really wasn't a big deal, except we ate more and watched a lot of football and parades.

Near as I can figure it, I think people are too drowsy after all that turkey eating to take pictures.

Before that they're too food focused to think about bringing cameras .

is there a specific reason why the thumb of your hand turkey kind of looks like a penis?

Yeah I sat at the kids table until two years ago when my folks finally got a bigger dining room table. Now the kids sit there and I sit alone.

This is exactly why I've never felt bad about eating chickens. They are stupid and mean and they can peck your eyes out. Get them before they can get you!

You've totally convinced me to do away with the shi-shi place cards this year and go with the hand-turkey placemats.

And as you can see from the picture, you also went all out with the plaid...

Reminds me of the time the family was arguing at the Thanksgiving table and my Uncle said "Can't we just have a peaceful fucking Thanksgiving?" Aww, good times indeed.

I don't think my family has many Thanksgiving pictures either. I KNOW we don't have any of us at the table, since nearly every Thanksgiving I've ever experienced has been in a restaurant.

We have wild turkey's in our backyard all day-everyday. Would these be the cooking kind? Chef Awesome-how would you suggest I do the "dirty deed"?

Interesting site. I googled the word "giblets" and you came up. I'm sending it to all thanksgiving retards.

Jesus! You DO have man hands!

May McGone forgive me for my hilarious cruelty.

Talk With No Thought said...

I am totally digging on that turkey stuck to the side of your refrigerator. I'm making one, and I shall call it Whiskeymarie. You're welcome.

Don't be servin' me up no dogkill turkey, woman!

Love the turkey hand! You are the next Martha!