Homespun yarns from life on the homestead.

Remember when I said I/we are remodeling our house?
Yeah.
Good times.
So, what started as "how about we finally re-do our crappy bathroom and maybe get a little plumbing and electrical work done" has now morphed into "O.k. Let's add a new bathroom, take away most of our closet space forcing us to sell our kidneys to IKEA for storage solutions, replace the flooring in 1/2 of the house, repaint 6+ rooms, completely re-decorate, get all new light fixtures, finally deal with the nightmare that is our basement, re-wire, replace appliances and, oh yeah- eventually we'll redo the crappy bathroom but not until everything else is done."
Yeah.
Good times.

The entryway I was so proud to have finished painting is, well...
the same.
At least I have the light I ordered and the rug came in, but buying curtains sucks and I don't feel like trying again yet.

So here we are: 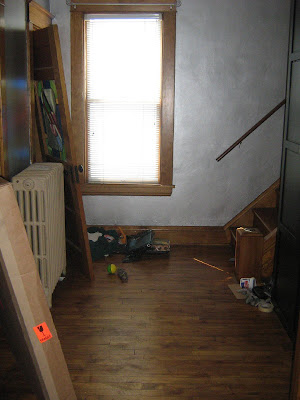 Yup, that's a door there. Nope. Nothing else done since I was last bragging of my remodeling prowess.

My dining room is looking amazing though. Nothing says "welcome to my home, we're not hillbillies- really!" like having a washer and dryer as furniture. The delivery guys refused to take them down our rickety and narrow basement stairs, which is probably a good thing because when me and the Mr. tried to do it ourselves, the end result was us sweating and laughing as we tried to un-wedge the dryer from between a pipe and a wall. We got it back out, but not after scratching the shit out of it. I guess we'll wait for George the Plumber to remove the pipes before we attempt again. 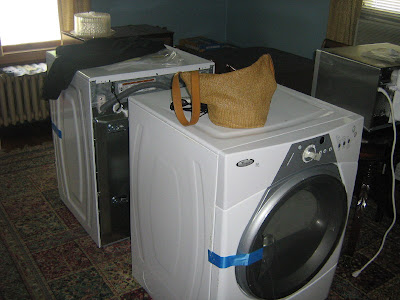 You can see that I have already acclimated to having a washer & dryer in my dining room by using them as my landing pad for my purse and jacket & such. And, from the looks of it, it's going to be a week or two before they go anywhere. And yes- that's a microwave on the table.
Yeah.
Good times.

Oh, and- at the same time we bought the new W & D, we bought a new fridge. All of this stuff was delivered this past Saturday. We were so excited. Yay! A non-beige non-1982 fridge with non-smoke-colored drawers! Yay!
Well, yay only counts if the fridge actually WORKS. We waited all day for it to start cooling. Nothing. By Sunday I was pissed and we already had to get a ton more ice for the four coolers sitting in my dining room with the rest of the crap. Long story short, we FINALLY have a working fridge. Today. Yes, that was nearly 5 days without a fridge. Yes, I had to throw almost everything out. Yes, indeed, Whiskeymarie was breathing fire and cursing like a trucker on meth, such was her ire.
But, Whiskey is nothing if not a good "angry customer" and she ended up getting a better fridge (worth $300 more) that was the one she liked in the first place but was too cheap to buy. So, now all is well. At least in the kitchen.

Like my new "new" bathroom floor and bedroom floor? You have to look hard, but they're in there underneath the boxes of stuff I packed up to get shit out of the way so that now it looks like we're either moving out or squatting here. Someday the flooring may actually even come out of the boxes. Dare to dream, Whiskey. Dare to dream. 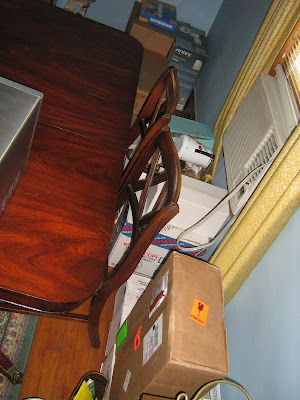 If you like the flooring, you'll LOVE my new bathroom: 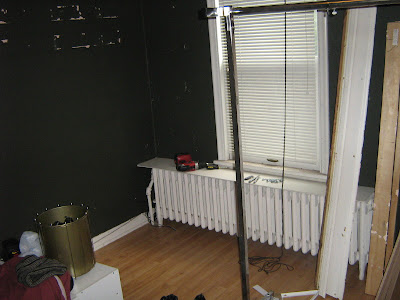 If this project doesn't get moving soon, that garbage can is going to have an unfortunate second life as a toilet. I plan on running a hose from outside as a "shower" and will just stand in an old barrel to hose off. I'll class the place up by putting up one of those craft-fair signs that have a painting of an old guy sitting in an outhouse on a piece of wood. I'll have them personalize it with "Whiskey's terlet, poop once, wipe twice" or something like that.

More updates to follow, but don't get your hopes too high, kids. This is going to be a while.
.
Posted by Whiskeymarie at 4:45 PM

Oh Whiskey, just go pick up a nice double-wide and be done with it. I will even get you the pink flamingos.

Or you could just make your house really crazy and keep it like that. You'll give "using the can" a whole new meaning.

You're not HIGH-CLASS hillbillies, that's obvious. High-class hillbillies have a BIG table with a fancy green felt top and long pot passers.

Any couple whose marriage can survive home remodeling - soulmates. : )

Whiskey M: just an idea for the washer so it isn't as white trash. What if you got a fish and put it in the washer. Then you train it to go all crossed eyed when people look at it? You know - like in hte cartoons? I'm not sure how hard they are to train, but how cool and quirky would that be? It's totally you.

mmmmmkay... I will totally stop whining about putting together my Ikea bed and nigthstand starting...NOW
Glad at least that Angry Customer paid out on the fridge!

Why don't you move? Then you can hire a Retard Real Estate agent, who does nothing....doesn't call back...takes 5 pictures...backs up over your lawn and then tells you your house is way overpriced. I ever tell you I hate rea's? If not, I do. Punch them in the Nuts/ Gunt mad. That's right! Yeah...and shove your 6% right up your Fat Ass Mad.

Have a good night.

I dig the colors of your brand new bathroom, at least. It's going to look fantastical, I'm sure, as long as you manage to live through the process.

Oh, honey. I had no idea it was this bad. I feel awful about going on and on about my garage now, assuming you've even had a moment's peace. Just keep telling yourself that this, too, shall pass. HUGS.

Oh, and I think your wooden sign should say, "Don't swim in my toilet, I don't pee in your pool."

We could polish off at least five bottles of wine between the two of us based on our combined remodeling issues. No one feels your pain right now like me. (Seriously, a house filled with natural gas and plumbing - not installed by a plumber but by the electrician who formerly owned the MP - that is leaking all over new drywall and paint... Remodeling is nothing if not excruciating.)

I am glad you have new appliances (that work). Aren't they just dreamy? I get all verclempt every time I look at my new W/D set.

IT WILL GET BETTER. This I promise. It is like a snowball, which is a cliche, but whateffingever.

It's like I tell my wife: The key to happiness is lowering your standards.

This is the reason why I refuse to consider my husband's brilliant idea that we add on to our house. This and the fact that the idea that a 2000 square foot four bedroom house on nearly half an acre isn't big enough for four people is RIDICULOUS.

You brought back memories of living in the trailer to me. I'll get your for that one of these days, I promise.

Your experience is precisely why I am apprehensive about tackling any more indoor home improvement projects, well that and a lack of cash.

Hi Whiskey - I didn't read this post, but instead just looked at the pictures. I can't tell you how sorry I am that your house was hit by a tornado. Or broken into by Nazi bikers on meth.

ohhh yeah. we spent a year and a half in renovation one time. lived in the basement. closet on the third floor. fridge in the living room. fun!

Holy crap- impressive. I can see us lounging around, drinking wine and eating some yummy food you made while we sit around the washer and dryer... Glasses tinkling, witty conversation and such.

Then I would excuse myself to go to the garbage pail. At which I point I would have to question why the hell I agreed to come over in the first place...

Hang in there sister. You have bigger cojones than I do. But we knew that already.

I know exactly what you are saying. I spent the entire summer looking around my house hoping worried that I would never know what the rooms were suppose to look like...would I ever be done. Can't wait to see the final project. Outhouse...I used the port-o-potty! Remember!

My house looks like this but sadly, we are not renovating.

Wow. That is ambitious. I can't even get around to calling the guy I want to hire to do some comparatively minor remodeling in my bathroom. Maybe I'm afraid that one phone call will set a crazy spiral like this in motion. Yep, that's it. It's not my laziness at ALL.