I have mentioned perhaps once or twice here that I used to be a dancer. Twelve years, to be exact. And lordy, do I have me some stories. Like the one time, when I was 12, and my Barry Manilow-obsessed dance instructor made us rehearse a little number to the "Copacabana" over and over and over. Her name was Lola...indeed.
Or in college, where I had a "dance class" that consisted of 12 of us laying in the dark in the dance studio with our eyes closed, and we were told to just "move when we felt like it". I still can't believe I got a grade in a class where all I did was doze off, roll around randomly and sneak peeks at everyone else looking as idiotic as I did.

But today...today I was feeling nostalgic for the old days where I lived in leotards and tights and my feet began their steady downward spiral into the gnarly trotters that currently live at the ends of my legs.
Ahhh, good times.

For y'all, my own little "dance of the whiskey plum fairy":
(feel free to play the video to help set the mood)


I don't seem to have any of my "dance attire" left besides my old toe shoes, so I created a tutu using everyday household garbage bags and the leg of a pair of tights. Feel free to steal this idea the next time you are experiencing a tutu emergency. 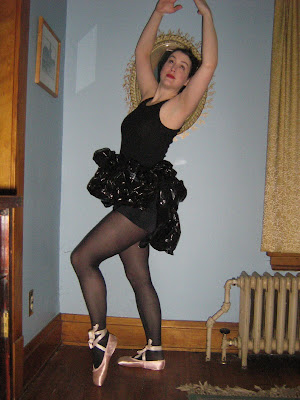 I'm smiling here, but I'm crying on the inside. After fourteen tries to get "en pointe" and stay there for more than 1.2 seconds, I fear I may have to lose a toe or two as several of them seem to have died from lack of circulation. On the up side, the Chinese foot binding I had planned for later today will probably go a little smoother minus a few little piggies. 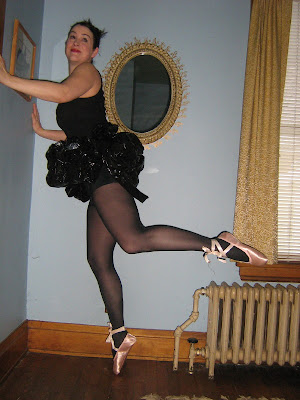 Lacking a real partner, I enlist the help of the only other being in the house that will willingly participate in my elaborate production, the great ballerina Pooterina Von Poontana. 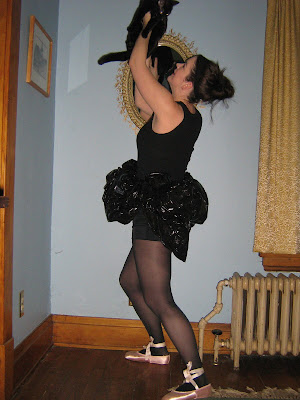 I had a big finish planned where I was gloriously lifted into the air and spun around, a la "The Little Mermaid on Ice"- but again, that whole issue of no one being home but me put a damper on that idea. I tried to get Pooter to lift me, but I could tell by her muffled mews when I landed on top of her most ungracefully coming out of that leap that she was uninterested in playing the part of Baryshnikov.
So I enlisted an inanimate object instead. Use your imagination. 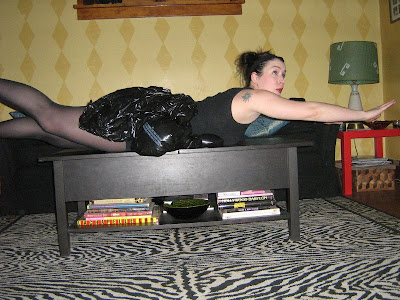 
Oh, and...
Happy St. Patrick's day to all my drunken Irish friends out there, whoever you are. 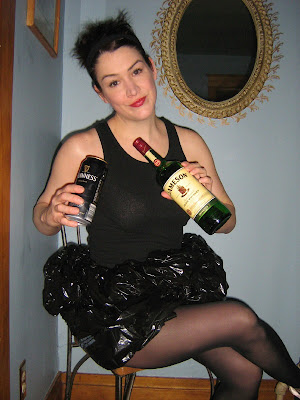 XO
Posted by Whiskeymarie at 11:08 AM

Also, that last bit is where you need your Mr. to do the lift, a la Dirty Dancing!

I am dying laughing. Happy St. Patty's day to ya'll

I wish I could come to your house and play dress-up...it looks like a blast (especially if there would be Guinness and Jameson involved!).

You never fail to amaze me with all the things you can do with just a garbage bag, belly full of liquor and good ol' Minnesota gusto.

You never fail to amaze me.

I assume the spinning portion of the dance comes after you have had a few Irish drinks.

You could open a school, advertising yourself as Madama Whiskaya Maria Partypantsevich, former Kirov ballerina now in political exile. Just a thought, in case you need a career change. And a Hefty bag makes a fine tutu!

here's what i picture unfolding at your house:

mr. whiskey marie: um ... are we out of garbage bags?
wm: doh! i used the last one to make a raisin costume for my blog!

[repeat a few months later, insert the word tutu instead of raisin costume]

Oh, now that was one of my all-time favorites. Bravo!

(I envisioned the whole thing going down to the tune of "Swan Lake.")

I swear you are both a hoot AND a hollar. Too funny.

Nothing like celebrating a holiday with a little toe torture and Guinness.

I guess I haven't been reading long enough to know you were a dancer. But omg I love your trash bag tutu. You are such a riot! I can never think up stuff like this. But now that you've inspired me, I'll have to borrow your idea for an upcoming post, all about how I was a Tap Dancer for about 10 year. While you were en point, I was Shuffling off to Buffalo and learning how to do one-legged wings.

I hope my mom hasn't thrown away all my recital costumes yet... They might fit the dog.

I'd go to the ballet if they had to make their own costumes.

Sweet jeebus I've never loved you more than I do right now after reading that post.

You're odd, really odd, and I'm laughing. Thank you.

Very creative. I am impressed at your resourcefulness!

I'm sorry, am I the only one that got excited about Copacabana?

Oh lady how you slay me (I've always wanted to tell someone they slay me)
Oh you know what would have been really cool. If you'd have gotten a green trash bag in honor of St. Patty's Day and drank while doing the piroeutte and not spilled.
That would have been even awesomer then the awesomeness you've already displayed .

Hey what's that tattoo? It reminds me of a sun my sister has tattooed on her left shoulder. Could it be that WM and my sis have a tattoo in common ?

So funny. Nice pics. You remind me of my best friend in high school who was always coming up with activities that involved costumes and me peeing my pants with laughter. One time we dressed up as Solid Gold dancers--remember that show? Maybe I will write a post about it.
Thanks for the idea and the laughs.

Happy St. Patrick's Day right back at you my whiskey filled Barbie Ballerina!

Oh my god, r cubed- you totally reminded me that I have pics from the 80's where me & some friends did our own version of "Solid Gold" & took pictures.
And, one of those friends is now the proud owner of an authentic "Solid Gold" black satin jacket.

I'll try and find the pics and post them...

innovative tutu manufacturing indeed..... give ireland back to the irish

I really truly love that experiments like this are how you spend your free time. I live alone, and I don't take advantage of the opportunity to do ridiculous things for my own amusement (or that of the Internet, for that matter) nearly often enough.

I never danced. I broke my collarbone once on the first day of gymnastics--in 5th grade. I fell off a mini-trampoline. With spotters.

See why I didn't dance?

I am very concerned that you do not own an actual tutu.

Now WM is one Kick Ass Ballerina, way to go man. Attempting to stand on my toes like you did would yield a broken fucking foot, even standing against a wall.

Bwah hahahahahaha!
I can just imagine what the cat is thinking.
But really, I'm impressed that you managed to get up en pointe for even a second, WhiskeyMarie. Brava!

Oh sweet jesus that was funny!

Nobody puts Whiskey in a corner!

I'm amused beyond belief, but I gotta tell ya, the whole thing is being ruined for me just a BIT by the fact that I am seethingly envious of your legs.

Actually Dean and I before his soccer game a month ago took pics a la high school with him posing with the soccer ball and such. We were cracking up hysterically and then he asked why we were such dorks. However, I will be happy to inform him that other people do this type of thing!

You are so creative! I'm jealous!!

A Hefty bag tutu...how moe-dairn. Looks like something Martha Graham would have gravitated to if she held out a little longer.

You have the MOST FUN EVER when you are home alone! :D

That is a ballet that I would pay Top Dollar to see. I'm so pleased that you offered it on the Internets for free!

I do believe you should go and make a crap load of the trash bag tutus and sell them. They are BEYOND awesome!

BTW - are those Freed or Capezios?

Love the tattoo and the tutu. If I had legs like yours I'd be wearing a garbage bag tutu everyday.

I want to live in your house with you.

I'm just looking at these older posts WM and this one is funny as hell. Love this blog.