Bless me internets, for I have sinned... 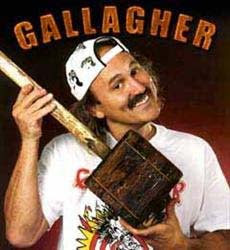 As I am having a blissfully peaceful week doing little more than singing songs to my pets, making sure my ass crack isn't exposed while riding my bike, and pickling and canning anything I can get my hands on (pickled cheerios or ham, anyone?), I thought I'd give you a confession plucked directly from the archives of Whiskeymarie's Church of Our Lady of the Perpetually Confused- where the word "confidential" really means "We'll totally blab this crap to anyone who'll listen."

Confession: I, Whiskeymarie VonPartypants, willingly and enthusiastically attended a Gallagher show when I was 14 or 15.

Yes folks, I love love loved me some dopey sledgehammer-through-a-watermelon humor back in the day. My friend Tallgirl, my sister and I would sit in front of the teevee for hours, watching poorly edited VHS tape after VHS tape of his shows that my Grandma would tape for us, being that we lived in the middle of nowhere and barely had the four local channels, let alone cable. Every time he'd reach into the cushions of the giant couch and pull out the flip-flop sandal and declare, "There's that thong!" we'd laugh ourselves retarded. He was corny, outdated, and looked like the missing member from the cast of the Slim Goodbody show, but for whatever reason we thought he was hi-larious.

When we found out he was coming to the Duluth Auditorium, we waged a full-on teenage assault on my parents to get tickets, including (but not limited to): whining, begging, pouting, door-slamming, pleading, bargaining, screeching, and pulling the "we never get to do anything" card until they relented. Our poor parents.

We were such assholes.

Turns out, my Mom had already snagged us tickets- front row center tickets for us, while they would be sitting about 10 rows back, away from the schrapnel.

Holy hell, the screeching and over-enthusiasm unique to over-caffeinated teenage girls was probably unbearable. In our minds, we were the envy of all. My Mom kept mumbling about how she "shouldn't have told us about it until the last minute so that maybe she would have some goddamn peace and quiet around this house".
We were way more excited for this than any heterosexual girls should have been.

The night of the show was sort of a twofer of joy for me: not only was I about to be splattered by misc. food and nonfood items by someone who probably flunked out of Mime school, but when we settled into our seats the night of the show, complimentary yellow plastic ponchos in hand, I looked down the row to see a boy whom I didn't know but had been randomly seeing around town and had decided I would eventually marry, such was my love.
Squee!!!!!

The show was exactly what we expected- in fact I'm pretty sure that Gallagher just did the same jokes over and over for the span of his career- we got splattered, we laughed when he pulled out the flip-flop again, I tried not to stare too hard at the object of my affection, who did not once even look at me being that he was probably 20-21 and I was jailbait with bad 80's hair and a food-splattered yellow poncho. In my young, Duran Duran and Jolt Cola-addled brain, I considered this a near-perfect evening.
Good times.

Not that anyone in their right mind would make this shit up, but in case you think that I live an embarrassment-free life where I don't do things like tripping on my own feet or somehow accidentally getting a toothbrush stuck in my ear...

Behold the evidence that I have held onto for 20+ years: 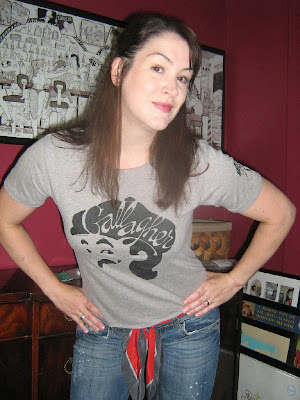 So there you go- another tidbit I probably should have kept to myself, much like my confessing to willingly attending a Huey Lewis and the News show.

Next up: "Did I ever tell you about the first time I got my period on Track & Field day?" And, "How about that one time I split my pants at work and it sounded like I ripped a huge one and couldn't decide to confess to the splitting or the 'fart' so I did neither?"

XO
Posted by Whiskeymarie at 11:09 AM

I loved Gallagher, too, for what reason, I cannot begin to fathom.

I wonder if "pulling out the flip flop" is some sort of sexual inuendo.

To complete the set you need to get a Carrot Top shirt.

To think that I kept my enthusiastic attendance at a Styx show (I was also 15) a deep dark secret. I'm no longer ashamed.

So tell the truth...you just got that shirt last night, right?

We really are related. I, too, attended a Gallagher show. Sadly, not front row - but close enough to laugh at the suckers being splattered. Ooops...did I say that out loud?

HA!! Gallagher is nothing! I willingly saw Debbie Gibson in concert ~ TWICE!!

sadly, i was more into Cheech and Chong.

I vaguely remember seeing Gallagher when I was like 10 or so. I'm pretty sure it was good times.

Also, that shirt is kind of creepy. Gallagher's eyes seem to follow me, like one of those old paintings in a haunted mansion. (And I swear that's not code for "I was just checking out your rack for an extended amount of time.")

i'm using this one today. i'm in love with it.

I'll bet you could sell that shirt to a hipster for big, big bucks. But don't, because it's awesome.

Sweet Lord woman, you never cease to make me giggle.

Holy hell. I hadn't thought about Gallagher OR Slim Goodbody in ages.

I can't wait to go back to that.

my corn flakes are soggy [not that that's very shocking] because i spent too much time smiling and/or laughing while reading this.

thank you for ruining my 3:30pm breakfast.

but don't worry, i've been awake for a couple hours, i just didn't eat yet.

and now, back to my mush.

I totally would have gone to a Huey Lewis show, if given the opportunity. Whatever happened to him, anyway?

I saw Gallagher in the Portland airport two years ago. He was in the bar and I can tell you, he did not look very humorous. He did give me a half-smile though probably because I was scrutinizing him to see if he emitted some kind of failed celebrity glow.

ManSon still has a splatter shirt and a few free videos. The man makes me laugh and made sure my son whos mother bought tickets at the last minute due to paycheck timing ...well, Gallager made up for it by calling Manson out in the start of the show and giving him a front row seat.

You are officially obsolved. (I have that ability since, after all my name IS Angel) Now go-and sin no more.

Oh, that shirt is priceless. But please NEVER ever get a Carrot Top shirt.

the fact that your t-shirt from umpteen years ago still FITS YOU like a glove, is a compliment. rock the gallagher goodness, lady!

Gallagher is the repository of all Zen wisdom in the universe.

Gallagher is all that is good and right.

Btw, I totally sent you pix of a big bowl. Email me if you got/didn't get them. Kvenya at gmail dot com.

A few years ago we went to Las Vegas, and we were on the little tram that gets you from the gate to the ground transportation/luggage claim area. This kind of old, slightly hippie looking guy wearing a satin Gallagher tour jacket gets on ahead of us, by himself.

We got off the tram, and I got a better look at the guy, and it was Gallagher himself--in town for a stint at the Orleans.

And I thought--the man is traveling while wearing his own tour jacket--as if he wanted to make sure someone would recognize him.

No one did, at least not on the tram anyway.

Am I the only one who is actually cool around here?

I do believe you're one of the only people on earth who could make a Gallagher t-shirt look hot.

But Gallagher was funny in his day, just like Milton Berle in whiteface once was. Not so much now. I, of course, have never done anything I regretted later - not counting that first unfortunate marriage.

Stop confessing to doing embarrassing stuff in your impetuous youth. You're going to give young people a bad name....

Holy crap! That is exactly how I am spending my weekend, except the opposite. Talking to Jurgen (no singing, to the world's delight), showing my ass crack because no one can make a fucking pair of jeans above the hipbone anymore and...AND! I'm not canning anything but *am* pickling my liver. Score!

And I agree with Kim. How in the H do you manage to make a Gallagher t-shirt look amazing? Bitch.

So THAT'S where you hung the bar piece! :)

Oh...I'm so jealous. I always wanted to see him and asked all of the time when I was a kid. You are my hero!

This type of post is why I read this blog. Well, that and for the pics of you my dear.