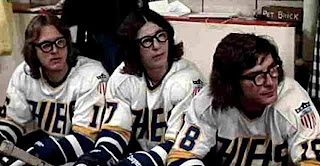 So I went to a hockey game this weekend.

College hockey, to be exact.

The Mister's family has had season tickets pretty much since the beginning of time. I'm fairly certain that the VonPartypants men burst from the womb wearing Bulldogs sweatshirts and shouting "C'mon! Work that puck!" or...something "hockey-esque" like that. Every year for christmas, in an attempt to finally get me to join the ranks, I get my own Bulldogs sweatshirt, hat, colostomy bag, t-shirt, or (in this year's case) knee-high socks that I could (in theory anyways) wear to actually go and witness the glory that is College hockey. Even Bubs got a sweatshirt this year- he sure looks cute in it, but no matter how much I try and coach him I don't think he's ever going to be able to hold a hockey stick without thumbs. Plus, "working the crease" has a completely different meaning for him, and it has nothing whatsoever to do with sports.

The funny thing is, my girl Waffle and I used to go to tons of Bulldog games when we were in 8th-9th grade. Her family had season tickets, but only two. It was a good few seasons for the 'Dogs, so she and I usually ended up getting standing-room only tickets, which we loved. "Standing Room" meant that we weren't obligated to hang out with her parents (especially her Dad, who still to this day seems to really enjoy the freedom and stretchyness of high-watered polyester pants), and we could roam the arena freely in search of awkward teenage boys that we could shamelessly flirt with over chocolate malt cups and nachos.
This love affair with hockey ended about the same time that we discovered our love of punk rock/skater boys and ended our pursuit of sporty/"normal" boys.

I haven't been to a game in years- usually I have obligations of my own if I'm in Duluth on a Friday or Saturday night (read: anything instead of hockey), but for whatever reason this weekend I not only willingly agreed to go, but I was actually looking forward to it.
College Hockey is a big deal in Duluth- most of the season ticket-holders have been going since birth- and the whole thing kind of feels like a really big family reunion. Everybody knows everyone else- if not by name, then by things like "the guy who tucks his team jersey into his dad jeans with bad feathered hair" or "that obnoxious woman who yells 'put it in the net!' over and over and OVER".
The smell of chili dogs and popcorn wafts through the air, and kids get excited to see the zamboni during the period breaks. If you can tune out the section of "student fans" shouting chants that they should be ashamed of (seriously- there are kids there and it's totally unsportsman-like) using words like "asshole" "fuck" and "faggot", the whole thing would have a old-timey, Norman Rockwellish feel to it. Unfortunately, tuning out those assholes (yes, it's appropriate here- kids don't read this and they ARE assholes- the students, not kids, you know what I mean) is nearly impossible. They seriously suck.
But, other than that it was a good time for me overall. I like watching hockey for the most part- it's fast-paced, fairly easy to understand the rules, and the fact that there is always potential for mayhem, missing teeth, and bloodshed makes it a must-see in my book.

So I went, it was fun, I actually watched the game. And no- I didn't wear a team sweatshirt. Or socks. Or a hat. I'm pretty sure that I'm not ready for that level of commitment yet.

Right?
Posted by Whiskeymarie at 1:14 PM

Ah, college sports. Glad you had fun. I lived in Gainesville, Fl for 30 years, home of The Swamp and the Florida Gators. I didn't go to a lot of games but when I left Gnvl one of the things I missed was the excitement and the "feeling" in the air of a home game. To this day I have my Catch 22 If You Can T-shirt! Not that it fits anymore.

So now I want a chili dog. Thanks, Whiskey.

I wish I hadn't watched so much hockey in my 20s, because I don't give a rip about it now. And I'm praying that if I ever have a son, that he won't want to play hockey. My worst fear is that I'll wind up with a self-entitled womanizer-on-skates for a son.

Those kids were yelling that out? Fucking dicks.

And may I tell you that my fav pic of you is the one above. I'm a big fan of your nose. Not kidding.

when you were in 8th grade, did you LOVE Skeeter Moore?

Being from the south (well, technically, anyway), where hockey is not recognized as a real sport (like say, NASCAR, for example), I am thoroughly unqualified to speak to either. I think that TAMMY VonPartypants, however, would be a Dale Jr. fan and have a crick in her neck from watching all those left turns. : )

How much do I love that you are the only hockey poster in the world right now that is not talking about Canada narrowly kicking the US' olympic ass? Go Bulldogs.

I love YOUR random posts about YOUR life!

I'm with Lollie - My husband reluctantly agreed to leave the cave with me for a bit yesterday afternoon but wouldn't stop fussing about whether or not the DVR was recording USA vs Canada. He wouldn't even get me a beer for fear of seeing the score on the TV's in the bar. What a baby.

As far as going to actual live sporting events hockey is right up there for me because it's short and the rules are fairly easy to understand -I like that.

You should definitely wear the socks next time. We had a minor league hockey team here for a while, and we went all the time. But since people here are confused by snow shovels and ice scrapers, I don't think they knew what to do with hockey.

I want those socks.

I love the picture and I love the idea of watching hockey. The idea is usually better than the actual act of watching. But maybe you have inspired me to see another game. Maybe.

Being from the South pretty much ensures that you could probably fit all that I know about hockey in one of Bub's creases.

I do however enjoy watching the fights.

Hockey is nothing.
It's all about curling.

I went to a U of MN Twin Cities game not tooooo long ago.

There were not chants of "asshole" "fuck" or the like.

Must be the Duluth kids are cold and swearing warms them up? ;)

For my 11th birthday I asked for a received a hockey stick. It has an orange blade or whatever the thing at the end of the stick is called. I wanted to be a member of the Philadelphia Flyers. Sadly, I didn't own ice skates. I didn't know how to skate. I didn't know how to play hockey. Dam. That is all :)

Oh, and thank you for throwing a pic of the REAL Hanson brothers out there.

First time here and you took me right back to the practice rink. it's hard to be a hockey fan in Atlanta, but I used to go see Emory and the UGA Ice Dogs play (should have called themselves the Chilly Dogs - would have sounded better).

Oh, and I'm with Wahkonamama. Simple assault against collegiate fucktards ought to be a misdemeanor punishable by a $5 fine.

Thanks for the good writing. Made me grin.

It all starts harmlessly. First one puck, then another puck and soon pucks become common and you'll forget all the pucks there's been.

It started that innocently with me and NASCAR... flash forward, now I'm camping outside the race track for three days at a time twice a year.

I went to a NY Rangers game. I have never heard the F bomb yelled so often and so loud.

Coming over from Lisa's blog..I love anyone called MrsVonSmartyPants.