Things the rest of us learned in third grade. 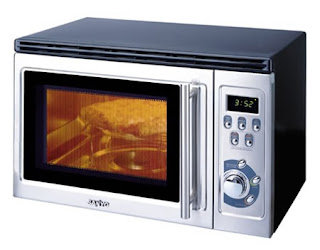 Yesterday at work, the fire alarms went off, the entire building had to be evacuated, and no less than three fire trucks/vehicles showed up. Since we haven't had a false alarm in a while (unlike the frigid winter of aught-seven where we had no less than 5 in the span of a few weeks and I may or may not have lost a few toes due to exposure- the lawsuit is pending), we all assumed it was something real.

"Oh my god, is it a gas leak?"
"I heard that two rooms are on fire!"
"I smelled toxic smoke- maybe it's a terrorist attack!!"
"Everybody run for your lives!!!!!" (Okay, that last one might have been real, and it might have been me yelling. It was crowded, no one can say for sure. The investigation is ongoing.)

Yeah...not so much an emergency as it was an unfortunate near-miss for the Darwin Awards.
Turns out, one of the "brighter" students in the building put something wrapped in foil into one of the cafeteria microwaves, set it for oh...an hour, and just walked away, oblivious to the fact that both their dinner and the microwave in question had literally gone up in flames.

Hmmm.
If that were my student?

Since you obviously haven't learned some of life's basics, Einstein- here are a few pearls of wisdom for you, to help you through this crazy thing called life:
You're welcome.

XO
Posted by Whiskeymarie at 10:57 AM

I wish I would have had some of these tips earlier this week.

Oh hell I better get my old school Jiffy Pop out of the microwave then.

And since "we're" talking about it. I LOVED I mean loved old school Jiffy Pop. Something about the stove and the shaking and the way my mom would shake her whole body when she made it for us. And then watching it get bigger and bigger until...

Aah those were the days

reminds me of my old neighbours who kept a microwave in their backyard. they said something about 'pushing it'

I see a future as a Denny's line cook for this genius.

Posting every day for a week?
Ummm, Fail!
Wait, pay NO attention to the slack-ass blogger leaving this comment.
:-(

I tried to read this whole post but I was kid of busy putting salt in my eyes.

You could've save me a lot of trouble by telling me sooner about the cops and tickling. Thanks!