Party in my lungs, not to be confused with the party in my pants. 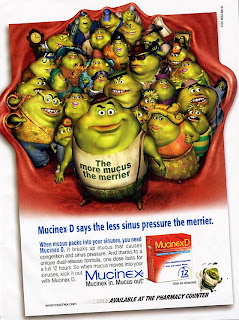 You all should know by now that any promise of mine involving time constraints and actual effort on my part usually isn't worth the sticky candy wrapper that it's written on. Life is full of little disappointments, people. You should probably also know that there is no Santa Claus, and that babies come from Mommy's no-no bits.

While I had grandiose plans for the weekend that included actually putting on big girl clothes, leaving the house and doing things like "socializing", the plague-like sickness that I thought I was almost over made a dramatic comeback on Friday. Instead of actually enjoying my three-day weekend, I spent a large chunk of it comatose on the couch, coughing like I need an iron lung, drinking buckets of tea, and inspecting my mucus. Turns out, it looks nothing like those sassy animated green globules in the commercials for Mucinex. Mine couldn't talk, let alone throw a party in my lungs. Stupid inferior mucus.

I promise that tomorrow I won't mention any of my bodily fluids/excretions. But then again, you know what my promises are worth...
Posted by Whiskeymarie at 8:43 AM

Well then, you need to stay on the couch and work on operation Fix These Fucking Lungs.

I mailed you some chicken soup. But I'm told it didn't travel well. Really I think the post office personnel just ate it and lied. ;)

I think you need to drink a Vicks toddy, or breath some Vodka, or... or...

Oh what the hell do I know, feel better soon!

I hope you are better soon. Rest,

Hope you start to feel better soon. Switch to something stronger than tea...maybe that will help. If not at least you won't know.

I misread "socializing" as "sodomizing" at first.

There is only one thing grosser than the Musinex guys and I will now write a post about it.

Those Muscinex guys remind me a little bit of my husbands family - best avoided - but the pills work great - take some.

Get some Old Granddad's Whiskey and put it in some chamomile tea with a drop of honey. It works wonders.

I knew you couldn't do it. Which is why I didn't even try.

Hope you're feeling better. The parallels in our lives are starting to freak me out: I had a terrible cold all week, too. Freakin' me out, man.

Hey, you decided when you're escaping to Gwentown?

Gwen- I know you don't know me but can I visit Gwentown? It sounds like debauchery in a Coke can.