Falling off the Welcome Wagon.

I've been informed by the officials in charge of "Operation Fix This fucking House" that I can chalk another room up as (basically) done, provided I can submit dated photographs and a "clean" urine sample. They sure are picky over there at OFTFH headquarters.

Well, it's technically a room, and we don't have much in the "win" column yet, so just give me this one, will you? The only other finished room is the new crapper off of our bedroom.

I take the entryway seriously, as obviously this is the first thing people see when they enter my home (that's what she said!), the second usually being cat hairballs the size of tumbleweeds lurking in the corners, ready to attack when provoked.
I want the room to be inviting, but not so inviting that I have to slip my guests a roofie and leave their unconscious bodies by the side of the freeway with a note pinned to their underpants.

I hate when it comes to that.

This is what this room looked like when we first moved in:

Painted mint green, with smelly 40-50 (no lie) year-old carpeting that smelled of old lady and cabbage. The same curtains could be found in the living room and dining room, and had a pastel depiction of what appeared to be the White House. There was no door on the closet, and the light fixture was a dainty floral-etched glass & brass number. 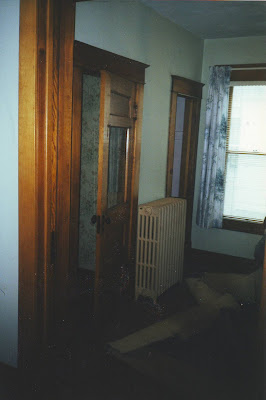 Here the Mr. is, trying to pry the carpet from the otherwise-pristine wood floors- the carpet was so old it had sort of "fused" to the wood. We didn't want to scratch the wood, so we had to use plastic scrapers and water to get that nasty carpet out. This pretty much sucked hairy donkey balls. You will note the delightful floral wallpaper and the fact that we had to wear masks whilst doing this. The smell was painful. 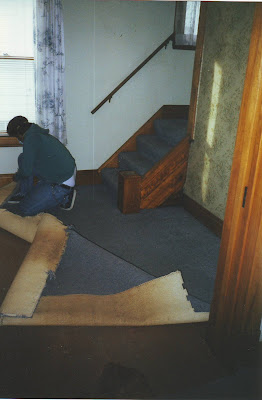 For the next nine years, the entryway was painted a glossy red with a light-mustard colored ceiling. We were so tired of white-walled apartments when we first moved in that we maybe went a little "overboard" with color. Like, stop me before I paint the cats to coordinate "overboard". I actually really loved being greeted by the red, but it really was starting to look as dated as feathered hair and prairie skirts.

I don't have too many decent pictures of the red, but here it is in a pic from a while back when we were going out for some reason or another. You get to see the room, plus I get to redeem myself from my last post with a picture that doesn't resemble Nick Nolte's mug shot. 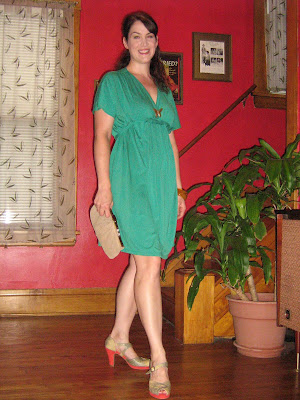 Now, how it looks in it's newest incarnation: 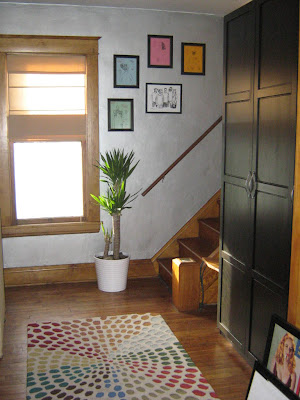 Soft metallic silver walls, white ceiling, a little more "minimalist" overall. Well, "minimalist" for me, anyways. I like to call my brand of style "restrained clutter" or "cluttered minimalist"- take your pick.
We now have a closet door- stained as close to matching as possible. It ain't easy matching old, perfectly worn, honey-colored maple floors. The flat rock on the radiator has a few fossils in it- I don't even really remember where it came from. 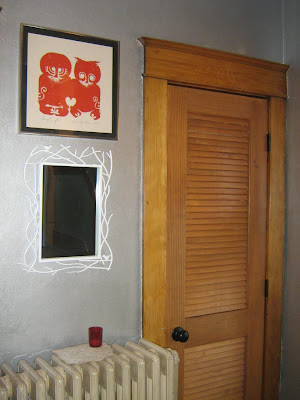 The print above the radiator is a 1972 print I picked up at a vintage store called "Loving Couple". I think it looks like my cats, even though I bought it before I had both of them. 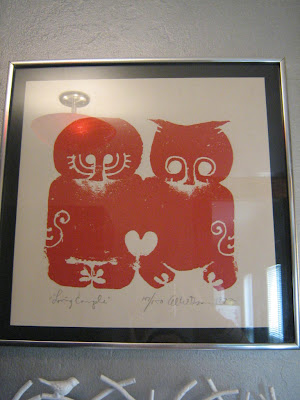 We have one of those stairways going upstairs that is sort of a "bridge" to the kitchen- you can access it from both sides, which I love. This feature is nice in that I don't have to walk ALL THE WAY AROUND the house to get to my wine/cheese/snack foods. Whew! Why burn calories when you don't have to, right?: 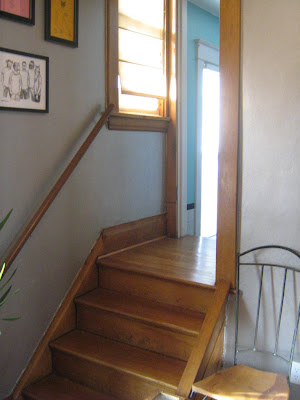 The prints over the stairs are by Matthew Cipov, and I have to thank Shannon for sending me some fabulous little owl prints by him that started me buying a whole bunch of his stuff. It is creepy and beautiful and minimalist and wonderful: 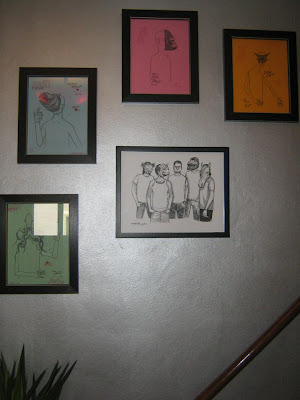 I have six of his "mask" series prints (two that I haven't put up yet), the one above with the group of young men, and the owl prints from Shannon. That's probably enough...for now.

And you can't see it in these pics, but I also have a snazzy new light in there: 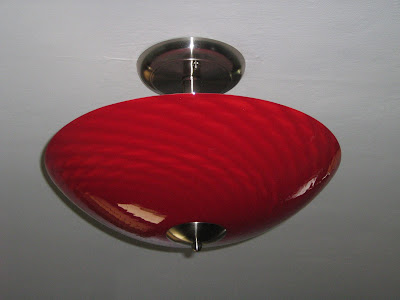 If we're lucky.
Posted by Whiskeymarie at 4:15 PM

You look stunning but where's my throne?

lookin' good! as much as i like red walls -- we have one in one of our rooms -- the minimalist is so clean and nice.

Gorgeous! My sis and her hubby buy up old Victorian homes and restore them, and it never ceases to amaze me how beautiful they can become. You guys are doing just great - what a beautiful home!!

Nice job! I especially like that print you can see in the lower right corner of the after picture. It appears to be a good looking dame smoking a cigarette.

Zibbs- My house, my throne. But I'll mail you a porta-potty if it will make you happy.

C- Our dining room is reddish now, so I didn't really get away from the red entirely. And I call those shoes my "happy shoes" in that they are insanely cute and also VERY comfortable.

GP- Thanks! It's getting there- we're trying to "modernize" it a bit while renovating, which is NOT easy with an old house.

Your stairway is called a "saddle back" stairway. I have no idea why. I love it too. And I love your entry way, especially the rug.

What a great looking place. I think I know where I am headed on my vacation this summer.

Damn, will you make me do work as part of OFTFH?

I hope not, I came for the color scheme and the drinks.

Holy hell that looks great. You kids have great taste.

I'm going with 'restrained clutter' because that brings to mind my style.

Only not very 'restrainted,' if you get me.

Oh, and that lamp is rock fuckin' solid.

love it! packing the bags! moving in on thursday!

cluttered minimalist is the perfect way to describe me, too. i'm trying not to lose the first part, but the clutter just seems to follow me.

the room looks great... esp. with you in it. you're so pretty.

oh and i was thinking the same thing -- your lovely cooking with my mediocre photography could be delicious! any chance you want to sell up and move to Vegas? :)

ps. do you have some kind of say in your word verification because i get gibberish on everyone else's sites but yours... they are always words and tonights gem is "mateless."

I love when you post operation fix this fucking house pictures. And I don't know if I've ever said this before, but your floors are so beautiful, I'd lick them. We have an older house too and it has its weird things, but it has wood floors, my first. What can I say, I like wood (and that's also what she said).
And you in that picture? Tall drink of water on a hot summer day! If that sounded gay, I meant for it to.

metallic silver was a bold choice, and it works. i would've never had the gumption myself...it is really pretty.

congrats on another room down!

7 or 8 rooms to go? Should we send extra whiskey? Nick Nolte Mug Shot is a very scary thing to read. Right up with with Boy George Mug Shot. ~Mary

So enjoyed the photos...you look wonderful!

Look at you all cute in your green dress and runway model pose.
:-)

I love your rug. Wait, does that sound dirty? Is "rug" a euphemism for "down there"? Or is that carpet? Only carpet and not rug? I swear I've heard something about rug diving. Anyway, nice rug.

I love what you've done to your house. Also, next time you drug me and leave me on the highway to get me out of your house, clothes would be nice. Thank you :O

Ooooh la la...not sure what's better looking: you or the room.

You've got some great taste there, Whiskey.

LOVE the area rug (by the stairs), and the red light is gorgeous. Me wantee.

I can't believe I didn't see this before now. I'm a little behind in blog reading. I'm so glad you love his stuff! I bought unicorn mask prints of his that I've yet to frame. I'm just waiting for us to move, so I can hang things that I love and not worry about people who might be looking to buy our place thinking we're a little odd. Even though we are. :)