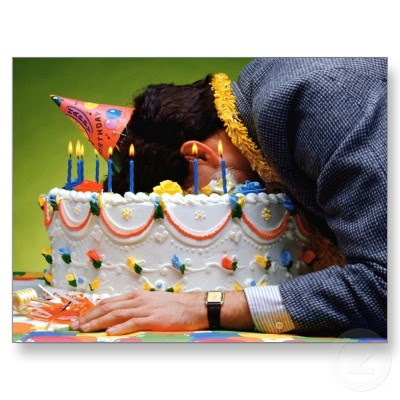 Posted by Whiskeymarie at 12:03 AM

I took in a kitten once that turned out to be feral. I still have the scar. And not to depress you, but I still get zits and I'm old enough to be your extremely hunky uncle. Oh, Happy Birthday!

Between you getting Botox and my high school BFF getting extensions in her already-long hair, I feel so very granola. Happy berfday!

"...wine-induced extreme pimple probing, in a sad recreation of a typical Saturday night in my 1985."

Proof positive of your very-much-alive youthful vitality. : ) Happy Birthday, Sweets! I love you. ..now let's get a look at those hooker heels...

One of the drunks (me) is VERY happy to see your return!!! I've missed your posts.
Have a spectacular birthday!

Happy Birthday again in a non-facebook, but more of a give-me-a-hug-so-I-can-slip-my-hand-down-and-grab-your-ass fashion. You have been missed. I only get to be life coach to my dogs. They still don't trust me around humans.

Maybe the "anti-aging creme" is doing TOO good of a job if you are getting zits?

Now get on out there and make those fancy shoes earn their keep.

So much to love here. Middle aged zits, technicolor poop, drunkenness, stripper poles, I mean what's not to love??
Honey I'm mid-century modern and I STILL get pimples. Everyone who told me I'd outgrow them should pay me $1000 for pain and suffering.

I'm still here! And I'm really curious about the Botox. Although, if I were to spend my hard earned cash on a procedure, it would have to be a complete overhaul of my avdominal region.

Anyway, I hope the coming year is your best yet, technicolor poos & all.

With only seeing you on the "PG" rated pages at FaceBook, I had nearly forgotten how much I enjoyed your idiocy !
Your style is inimitable,(Praise Allah), and your day-to-day thoughts and actions exhausts me, like my 0ld Ass'd Self trying to over-please a first-time Lover !
Anyway, good to see you back to Blogging, and I'll be by to see you a Lot, as I'm determined to get my Blogging back to it's Election Year Glory in the immediate future.
Love Ya ! herm

Can't wait for the summer, you crazy lady. Thank Odd school's gonna be out and you'll be on the loose again.

So the King of Punk
Says to
Queen of Punk
Yep. Happy $4dith Birthday...Queen of Punk.
( Note birthday shit aside, I never said that.)

botox and hooker heels ~ you are my idol
happy wining!

Happy birthday! And take comfort in the fact that I'm older than you and also get pimples.

Happy Birthday!!! Go forth, get drunk and dance in those shoes!!!!