Rain, rain, dripping from my nose...

I've been riding my blue Univega bike (named Dirk- yes, all three of my bikes have names. I also have Ethel & Gary, but we'll talk about them another day) everywhere lately. In summers past, I would dabble in the cycle arts here and there- pulling out one of my vintage one-speeders to just meander around the neighborhood, challenging the other kids to races and ringing the bell on the handlebars every chance I got. It wasn't about getting anywhere in as much as it was about color-coordinating my outfit to match my sweet wheels.

This spring/summer, though, I decided to be a bit more serious about it and get out more. I put my saddlebag basket on Dirk's bum so I'd be ready for anything and ready to carry almost anything.

I've kept my word to Dirk- I've been all over town many times over- dodging traffic and drivers that don't seem to know the rules of the road, hitting teeth-shattering potholes, attempting some ridiculously steep hills, avoiding unleashed dogs, dealing with sore "bike ass", picking bugs from my teeth, and just enjoying the general awesomeness that comes from just coasting down a hill and listening to my wheels spin.

One thing I'm a bit timid about, however, is biking in the rain. It's slippery, your brakes don't work as well, and (pointing out the obvious here), you get really wet and kind of look silly, and you get that stripe of wet down your back and between your buttcheeks that feels so very, very wrong.

I rode Dirk to work yesterday, a day where (like every day lately) rain was predicted. And just like every other day lately, I figured that it wouldn't rain, as we hadn't actually achieved rain on even one single day that it has been predicted.
Oops.
When it was time to go, the skies were black and it was pouring with no sign of letting up. I thought about waiting it out, but knowing that I had a doggy at home that was probably doing the pee-pee dance and contemplating using the couch as a diaper, I knew I had to just suck it up and head out in the (still pouring) rain.

And it was AWESOME.

Other than one near-wipeout early on, I loved every second. I took a route that utilized biking & pedestrian paths, so I avoided traffic almost completely. I felt like a kid- soaked from head to toe, grinning uncontrollably, revelling in every second of it. It sounds cheesy, but I felt more alive and connected to things than I have in a while. It was fantastic. 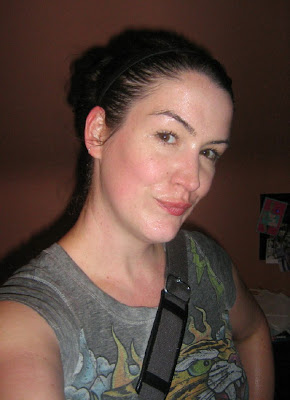 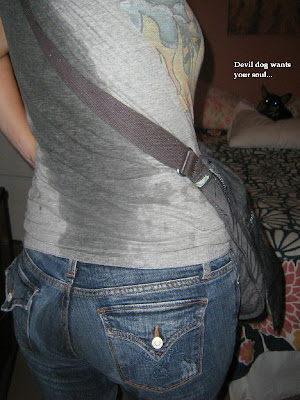 PS: Yes, this is as close as I'll ever get to mooning you.
Posted by Whiskeymarie at 10:50 AM

Darn, I'm thinking the mooning would be worth a pay per view....

You must wear waterproof mascara.

ya didn't by chance happen to pass the dude who wanted to know who your dog's daddy was whilst you were out riding and frolicking in the rain did ya?

I would have loved to have had psychic powers to your mind the second after he tossed you that line.

This makes me miss my biking days. But never again will I ride a bike. The last time I did, I was hit by a car.

That settles it !
I've got to get a bike this year !
I moved from the 'burbs, to the downtown area back in December, and while a lot of stuff is now in easy walking distance, it would be so much nicer to ride ! Now I can't wait to relive the wet crack, soggy wedgie days of my past, cause as we know, Indiana has those "pop-up" showers just like your's in MN.

I hate being caught in rain, but I love being totally trapped in a full on downpour that drenches you until you wonder where you put your invitation to Noah's Ark.

I have been out on my bike a lot this year getting ready for the MS150. Then they closed the registration early! WTF am I going to do now? Oh yeah, drink beer...

It sounds fun- I just got my new trek last week- I think I might give it a try.

If my brakes start slipping and I careen into a gaggle of old ladies or something,though, it's sue-ville city for you, dude.

Look how cute you are wet and all. My pants were wet like that one time. Wait - you weren't talking about peeing them huh? Never mind. Forget I said anything.

You know the rules.

how many miles is your commute to work?

Sounds you really enjoyed it! I love walking in the rain...playing with the rain, and that's all I can do...since I can't ride a bike...pfft! LOL

Love you rain story. Too bad I can't get that same feeling. It's been raining in Pa since April and I have had my fill.

That sounds awesome! Not awesome enough for me to actually do it, but awesome for you!

Other than flying a kite, riding a bike is probably the best way to feel like a kid again.

Dammit. Now I have biking envy. I have a good excuse right now. I can't remember the code to get into the garage.

There is a lot of rain in Seattle. You'd feel that way a lot if you and Dirk moved here (oh and the Mr.)
Just sayin.

hee hee, booty shot! I put one up on Facebook every so often when I feel the need to moon. Hmmm, maybe Sunday?

Ooooh! I saw the best bike today and I know you'd love it. unfortunately, there I was without my camera...

It looked like it had pink tattoos all over it!