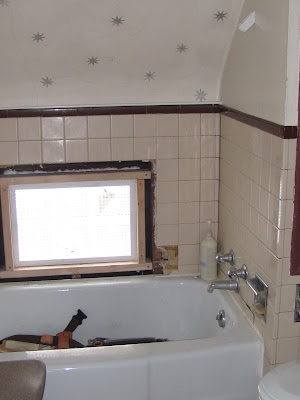 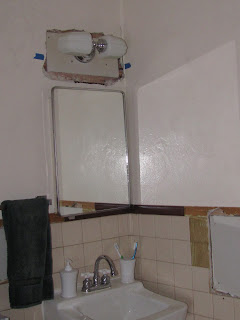 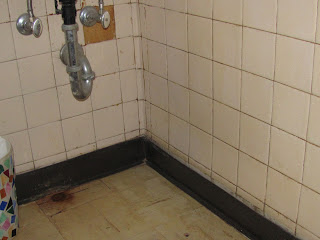 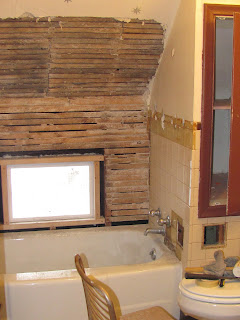 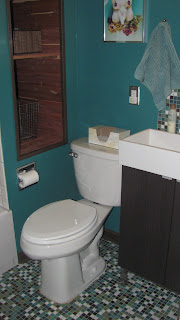 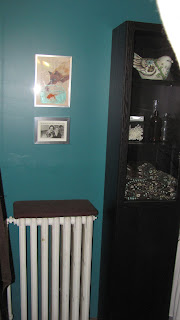 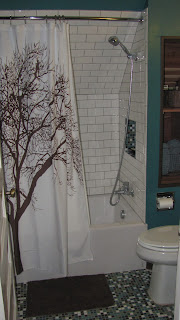 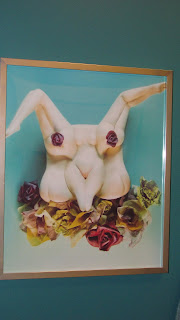 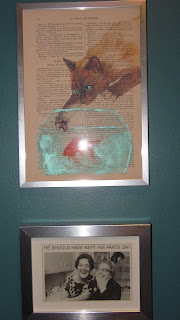 Posted by Whiskeymarie at 4:11 PM

The cedar will smell nice until the after "chili night". That will take the new car smell right out of it.

And can I say, I expected to see one of those "Psycho" shower curtains with the Stabby McStabberson silhouette on it?

I totally <3 the new crapper, but can a full-sized adult actually stand in that shower, or sit with legs extended in that tub? Both options look too short.

Regarding the "bunny vagina" art, I couldn't figure out if it was a bunny or a vulva, either-- even before I read what you are calling it! I think that means that you've named it appropriately.

So, the kitchen is next, huh? Take your time. Do A LOT of research. Use butcher paper to lay out the cabinets, appliances and especially the island, if you are going to have one. If you want natural stone counters please look into soapstone. It makes a fantastic counter that requires almost no maintenance and is non-reactive to acids and bases. Plus, it feels like silk. Granite, quartz or marble can't claim those wonderful qualities. Also, it can be made with integrated sinks, drainboards or anything else you dream up. It's so non-reactive and heat resistant they even make cooking vessels and wood stoves out of it. Floor and backsplash tiles, too. Now, I'm not saying that you should wrap your entire kitchen in soapstone, just a selected part or two.

I always enjoy before and after remodel pictures. You did it all yourself? Wow, that gives me encouragement.

There are about one dozen big projects that need doing around my dad's place, two structural and the rest aesthetic. They'll never get done in his lifetime, of course, because if he experiences any sort of change at all the earth will stop spinning and he and his ancient carpeting and pink bathroom floor tiles will be suddenly thrown out into space. In the meantime, I'll probably drop dead from a rage stroke while trying to vacuum up dog hair out of the thirty-five year old carpet.

where did you find the tree shower curtain?