Yeah, that was me looking in your window. So were these people- none of us are impressed, Mister. 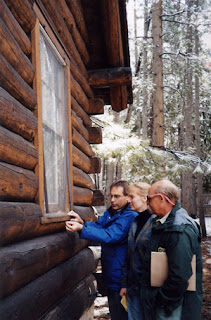 So I was walking Bubs the other day, just down the street so that he could do his Praying Mantis impression whilst simultaneously releasing of the turds in that charming way he does.  About 2 blocks from my house, he stopped to sniff what could only have been magical once-in-a-lifetime unicorn pee, judging from the amount of time he had his little snout smooshed into the grass.  While waiting for the sniff-fest to end, something in the house to my right caught my eye.
At first it looked like something was shaking, or fluttering in a breeze, but since it was inside the house that seemed unlikely unless we're experiencing a rash of indoor tornadoes, much like the summer of Aught-seven.
Unfortunately for me and my eyesight, within a second or two I realized exactly what was happening.  Directly behind a computer monitor propped less than a foot from the window was one of my gentleman neighbors...

Yup- right in front of his picture window, with nothing but a smallish and totally non-camouflaging piece of computer bric-a-brak to shield me from seeing his face.   Luckily, he at least had the propriety to keep his junky junk under the desk while furiously going about his business, but seriously- WHO MASTURBATES IN FRONT OF A WINDOW IN THEIR DINING ROOM????????? ON THE GROUND FLOOR????

So, I have to wonder- am I dealing with your run-of-the mill dirtbag here, or is it more likely that this dude already has, or will likely have, his very own sex offender registry soon? And, since I'm being all straightforward and stuff, I will fully admit that I have walked by a few times since, just to see if this is a common thing.  I feel like I have to- this house is across the street from an elementary school (though the window in question faces another direction), and if this is a common occurrence I feel like I should alert some sort of authority figure, like the Pope or maybe Batman.  And if a call is warranted, I feel like I should be really, really sure, as I'm pretty sure being labeled a "sex offender" isn't quite the same as getting caught running a red light or stealing extra mustard packets at Arby's.

I guess for now I walk by, hoping/dreading to see my neighbor's hand bobbing up and down as if he were enthusiastically working out with a Shake Weight, minus the Shake Weight.

I'll keep you posted.
Posted by Whiskeymarie at 2:02 PM

Seriously, sounds like you're doing your awkward but responsible due diligence. Probably just a garden variety perv, but since there's an elementary school across the way...

The only "normal" people are people you don’t know very well.

Classic dirty old man; how else can the little ones learn?

I once drove by a bus stop in the winter-- cold-- and there, under many layers, was a DOM whacking off facing the street! I mean -- what?? But, there ya go. He was just enjoying himself and not abusing anybody. I was free to look away.

Maybe he was just scratching-off a new batch of instant lotto tickets. In his lap.

Also, can his house be on the tour of MN when I come to visit?

Maybe he was on a cougar hunt?

Maybe there is some sort of bat-signal you can use to alert the authorities when he is flogging? Like a large penis shaped light?

Alerting the authorities at the Catholic Church about kids in danger from an adult perv have not proven effective. Trust me.

And by the way - ICK ICK ICKY ICK. Hasn't he heard of curtains?

First of all, why wouldn't you at least draw the shades or curtains?!? Gross! Or maybe the moment just caught him and he forgot he was in front of the picture window??

On a side note, we had a big picture window in our living room with these sheer curtains that you couldn't see out of very well. My sister, Mom, and myself would usually do a mad dash from the hallway to through our kitchen to downstairs to get clothes in the morning before school and never thought people could see in since we couldn't see out well. Years later in college, one of the guys I carpooled with informed me you could actually see in pretty clearly and it was the highlight of the neighbor boys that I carpooled with watching us girls run through in our bra and undies getting clothes downstairs.

Maybe he has thing exhibitionist thing going on? Like maybe he kinda wants to get caught?! Oh lordy that's all kinds of weird! BLECH....
Renata1967

So odd. If the gender roles were reversed, this blog post would be about the greatest dog-walking experience of your life...Anyway, if you want him to stop, you don't need to tell anyone. Just wait to catch him again, then go bang on the window and yell "Nice cock!"
He won't do it again.