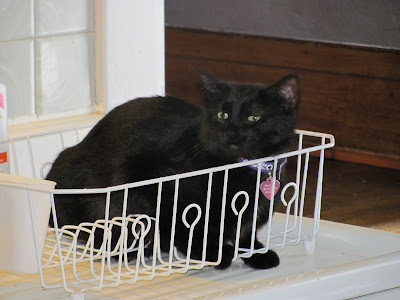 XO
Posted by Whiskeymarie at 7:56 PM

i was just about to give you a web-based tap on the shoulder - asking you where the hell you've been! Or, what kind of cheese could be awesome enough to keep you away from us for so long. Dorito-infused cheese?

Damn woman, I was starting to get withdrawal symptoms from one of my fave twisted bloggers.

I guess absence makes the heart grow fonder or some kind of BS like that, right?

It's about time you got your booty back to blogland.

What do you use to keep your cats squeaky clean?

Personally, I just throw the pug into the washer on gentle. Then I spread her out on a towel to dry (don't want the wrinkles to come out in the dryer).

I like imagining you sitting on Dirk's face. Seems that all is right with the world with that, and of course having you back on the web.

THERE you are. I was getting worried. Welcome back and-- what's that smell?

It sounds like all is well in Whiskey Land! I was up in your corner of the world last month visiting my brother...sweet baby jebus, I don't know how you all deal with the winter. I've been alcohol free for a month and attempting to eat healthy and have lost 2 pounds. WTF? The alcohol alone should have caused at least a 10 lb weight loss. Oh well. My liver is probably happier. xoxo.

That cat picture is hilarious! Although I'm not sure I want to know what's in the litter box then...

Gluten. That's all I hear is talk about the gluten. I have no idea what gluten is or what is does to you because when I see stuff about getting healthy with food it usually bores me.

Is it just me or have our recent posts simply morphed into long, public emails to each other? By the way, how's that rash? I told you not to ride the bus without pants, dummy. Hahahahaha!

One other thing . . . you know those pills you "stole" out of my medicine cabinet? You know how they were marked "THESE PILLS ARE THE HAPPY ONES"?

Well, they were actually stool softener. I can see ya coming a mile away, Stickyfingers Magee. Gotcha!

Rowing is the best full body workout there is (Woo Whiskey!) and will TRUMP gluttony. And if pig farmers get ripped-up-like-Rambo-rowing-Whiskey booby flashes, I hope they have blogs.

Every year here we have Dragon Boat races, and every year there are teams of rowers that form and train so they can participate, and I would so love to be one of the boys with broad shoulders and wet vests clinging to my hardened nipples and a creaking oar gripped fervently to my calloused hands. If you have the opportunity, take it!

Pig Farmer I'm not...But a Salmon Rancher from Pigsknuckle, Arkansas? Been there done that.

Wait, I'm lyin' they aint got no Salmon in Arkansas. I'm just tryin' to keep it interesting.
:-)

i am jsut glad you are back

You haven't missed much. Oh except for the fact that I gained an Adams Apple.

I've always wanted to row. Never got my shit together enough to do it. Lucky you!!

This is the first free hour I've had in ages and wasting --err spending -- it on you is SO worth it.

Have you discovered the gluten-free oatmeal animal cookies at Whole Foods? Take out a homeowner's loan and get you some. They're somehow fucking fantastic.

I totes forgot to comment here about rowing. My sister was on the rowing team in Duluth (like a competitive club sport with trips to places like lovely Thunder Bay) and LOVED it. She was cut up like nobody's business.

I had a similar thing happen with my blog...I'm blaming it on Global Warming. Either way I'm happy to be writing again and even happier you are!