I bet Emily Post never used a receipt at the bottom of her purse for kleenex, either. 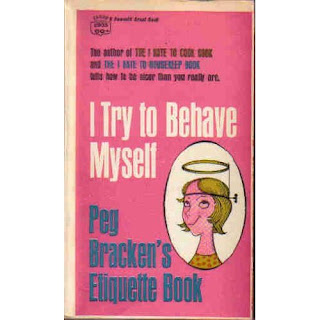 I thought today would be a good day to brush up on my etiquette skills, given that my demeanor this weekend was starting to resemble one of the better episodes of the "Anna Nicole Smith Show".

I've been curled up on the couch all day reading Peg Bracken's 1960 gem, "I Try to Behave Myself", which pretty much has been my own personal mantra for the last 20+ years.

I try to behave myself, I do.
"Try" being the operative word here.

I love, love love Peg Bracken's books. Think of her as Martha Stewart meets Emily Post meets Lucille Bluth meets Kathy Griffin. She was sort of the "anti-housewife" housewife of the 60's & 70's, and she wrote a bunch of books, all still funny 30-40+ years later. Her "I Hate to Cook Book" is priceless, but we'll cover that another day. She's also Matt Groening's (creator of "The Simpsons") mom, which is all sorts of awesome.

Her brand of etiquette is one I can hitch my discount, one-eyed pony to. Try to be good. Try to do the right thing. Try to not make an ass of yourself every day.

A few of Peg's gems:

"...it is unwise of Victoria Goodhost to try a new recipe on guests, or to try any faintly out-of-the-way operation she's not wholly sure of. If she serves the Old English Pudding with Flaming Currants, but the currants won't flame, or Cherries Jubilee, and the cherries won't jube, the guests will be very embarrassed, as though they were watching their child flunk a piano recital, and they will wish they were elsewhere."
"Actually, whether or not a woman should sit at a bar depends on the cut of her jib. If it is a wide one, it won't look so good on a bar stool, and she'd better take a table"
(on people who forget they've already met you):
"Once, on being introduced for the fourth time in five weeks to the same woman, I did this: "Look at me," I said. "Find some identifying trademarks. I wear my hair like this, you see. My ears are pierced, and I usually wear gold button earrings. My name is_______" and I pronounced it with great clarity. "I'm pointing this all out," I said, "in the hope that we'll never have to be introduced again." And we never were."
(on childless couples):
"They (couples with children) are, unfortunately prone to ask, 'Why don't you have any?' Now, there are, of course, many possible reasons- physiological, financial, professional, and just plain personal. (some childless couples regard the lives of childful couples as being dull beyond belief, bounded on three sides by Pablum, plastic pants, and Whinnie-the-Pooh, and on the south by Disneyland.) But childless people are more polite and don't say these things, nor do they ask questions like, 'Why in the word did you bother to produce a little creature like that?' which would be just as courteous."
(on throwing cocktail parties):
"What to Do if Someone Gets Slugged (schnockered) Anyway: Actually, the Goodhosts should have seen this. After all, they've known Chuck for a long time. Unfortunately, though, the traits that get you into a situation usually prevent your solving it. The Goodhosts' warm hearts were responsible for including Chuck in the first place, and now these same warm hearts keep them from calling the cops."

Peg gives me hope. Hope that I too can be more thoughtful when it comes to the ways of manners and such. I don't forsee a Cotillion in my future, but maybe, just maybe I can learn to resist the urge to laugh at inopportune moments, not address people I barely know as "twatmonkeys", send thank-you cards where I don't use the word "douche" in an affectionate manner, and maybe, just maybe, I'll remember which gloves to wear to the ladies luncheon at the country club.

Um, yeah. My money is on the twatmonkey, if we're betting here.

XO
Posted by Whiskeymarie at 4:39 PM

Hahhaha I want to read that book now! I love the part about couples with children asking why couples without them don't have any...seems relevant to my life these days!

That was really funny. Though it was hard to concentrate after the part where you said that higher up at work never remembers you, because I was trying to think of different ways you could make him always remember you, like jump out from around the corner with a cap pistol in your hand when he's walking by while screaming "YOU BETTA REK-O-NIZE, BITCHLES!", or tossing a sack full of angry lemurs in his lap as you run by and scream out your name. I bet he would remember you after that.

So I went back and re-read the rest of your post. That was all good stuff, too.

So much great stuff in this one post, you are my hero! I need to look for these Peg books. She sounds like Erma Bombeck and Dave Barry together.

I always experience the opposite of what you get, advice from people who don't have kids. I have a friend who always likes to give me advice that his dad passed down to him. All I can imagine is that his dad was the great Santini.

Because of this post I'm definitely going to start referring to people as "twatmonkeys" on a much more frequent basis. Thank you, so much.

This is all sorts of awesome. Love it, and I MUST HAVE THIS BOOK. Loved the childless v. childful discussion and this? Is so true: "the traits that get you into a situation usually prevent your solving it."

I wish people wouldn't ask about kids. I feel like I can't be honest that I highly HIGHLY doubt I will ever want them. That makes them feel like I am judging them for having them - I'm not - kids just aren't for me.

Did not know a jib was an ass. Seriously. I've only ever heard it in reference to men. So I kind of thought it was synonomous with how "they" were hanging.

Like the cut of your jib should mean they're hanging just right in the middle. Not stuck to the left thigh or bulging out trying to say high.


So thanks for the enlightenment.

And for the record...some of us child"ful" people would never be so stupid as to ask "why don't you have kids". That's the tackiest fucking question. Ever. If I hear it asked in my presence please allow me to kick said couple in the reproductive parts.

If you wind up deeply picking your nose...I'd offer you a receipt from my purse as Kleenex but there's already gum stuffed in it. Sorry.

Welp, I see a couple of books being added to my Amazon Wishlist in 3...2...1...these sound right up my alley (that's what she said).
I have had to field the Why don't you two have any kids question so many damn times, it'll be nice to have an answer that doesn't involve a big ol' FUCK OFF in it.

I have to stop sitting on barstools.

Regarding the "Why don't you have kids?" question, as I've written before, as a SINGLE man with no children, I might as well tell them "because I feed on children and retire to my coffin every night in a colony of goddamn vampires." — Oops, NO, WAIT! Vampires are hot now right? So it would be the opposite of what I just said, ...what the hell ever that is. It's not only unusual to be childless, it's unnatural.

My only other comment is, you're fucking awesome, Ms. VonFunnypants. : )

Any fan of Peg is a friend of mine - I love her books! Going to your archives to see if you wrote about "I hate to cook". Thanks for popping up in my google search!