If the narcolepsy doesn't get you, the cold sores will.

So, my girl Blondie and I had our bi-annual (as opposed to bi-curious, bipolar, or bi-anal, as Scope was hoping) rummage sale last weekend (also known as a "tag sale" to some- typically the same people who refer to the shitter as the lavatory). 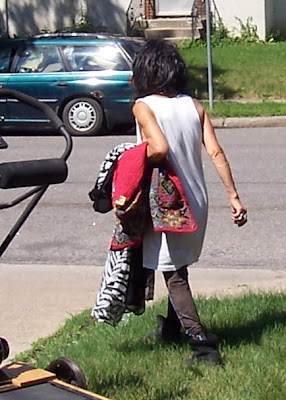 Unlike last time, there was a disappointing number of weirdos, cheapskates, Jesus freaks and pedophiles to amuse us whilst we sat there, trading handfuls of change for the sad reminders of our compulsive drunk-shopping habits.  We had a few wheelers & dealers- one guy who thought he was so smooth, haggling me down from three to two dollars for a used bathroom sink that I was ready to give/throw away anyways.  HA! Take that, SUCKA! (Small victories, people.)
By the end of the first day, we were resigned to the fact that maybe, possibly, this time around was going to be a big 'ol boring bust in the "Freaks and Oddities" department.  maybe for once most everyone would be your normal, run-of-the-mill, garden-variety bargain hunter.
Until...

We were at a lull in the excitement, not a customer in sight.  We both were perched on the front steps, likely discussing the pooping habits of our dogs, when something caught my eye.  A slow-moving teal colored station wagon sort of coasted down the street, seeming to move without the aid of any sort of motor.  It looked to be held together with duct tape and bungee cords, and it was packed to the roof with what I can only assume were dead squirrels and empty Percoset bottles.  With a rattle and a cough, the car parked right across the street, the driver obviously coming to our sale.
"Holy shit- this is gonna be good" I muttered, just as Blondie said "What?" and turned around to see the driver of the car approaching.
I'm not sure how to paint an accurate picture of what we witnessed then, and this rear-view pic does NOT do the overall vision any justice whatsoever, but I'll try anyways.  She? (Blondie swore that at first she thought it was a tiny Asian man dressed in drag) was about five feet tall, including her ill-fitting wig that made me think: "Bai-Ling's mother, if she were in Grey Gardens", and had a disturbing amount of cold sores for someone who appeared to be in the 45-95 year-old range.  Wing Ling was wearing a long, knit, ill-fitting and seriously stained tank top that, every time she moved or bent over, let her somewhat large, naked and saggy breasts hang mostly or completely out, much to our horror and delight.  Purple velour leggings, winter boots, and piles of necklaces completed the outfit.  At one point I was trying not to stare (the nipples! AAH!), but out of the corner of my eye I thought I saw her wig fall off as she tried on some jewelery, and I had to hold my breath so as not to esplode.  Turns out, she TOOK OFF THE WIG HERSELF to try on a necklace, as if that were the most natural thing in the world to do.  I myself often find that I like to remove my shoes and underpants when comparing prices on frozen peas at the grocery store, so I totally understand.
She wanted to bargain, and since seemed like she was just crazy enough to whip out a sharpened ball-point pen and sever my jugular in a freakish display of old Asian hooker rage, we let her have everything she wanted for five bucks.
I'm not even entirely sure what all she bought, but I sure am glad that this bright ray of sunshine took a few minutes out of her busy day- shopping, speaking to the trolls that live in her car, and taking time to not bother to notice that her mammaries were just hanging out there for the world to see- to visit us and remind us to never kiss hobos without protection, and to wash our hands regularly.

Also in the last week or so, I developed a raging infection from my foot surgery, likely due to my shoeless grocery store antics, and am currently on two very, VERY potent antibiotics, as well as a bit o'Vicodin- just for fun.  I'm not sure which one is doing it, but one of these delightful medications has caused me to develop a strange and (hopefully) fleeting case of narcolepsy.  I spent the remainder of the weekend (after the panicked trip to the ER where a kindly doctor of Scandinavian descent had to not only look at my red, oozing foot, but also a strange blue streak running up my pasty, unshaven thigh) plonked on the couch, drifting in and out of sleep, occasionally having mildly hallucinogenic dreams about James Franco, Cheerios, and airline travel.

So, that's enough for today, kiddos.  I'll save my "cooking while medicated" stories from this last week for another time, after the food poisoning subsides.

hooker boobs remind me of my mammogram today.

except i don't have any cold sores.

you do know Bai Ling is on the new Celebrity Rehab, right? I can't wait.

This is so great because I am having my yard sale tomorrow.. and I was already worried maybe the freaks wouldn't come out. Oh please let them come out! Last year we had a woman (in her mid 50's) come with her grandson (age 13, easily) who had to wear a PINK "I love my Gramma" shirt. I felt bad for the boy and almost called CPS for him. Or gave him the number to call for himself later on. But the best is when she started asking if we had any pads or cushy things she could use for a pad. Guess why? Because her vagina is really sore and it helps. She puts 'em in the freezer and just cools off. Then wanted to show us the one she was using right there. It was toomuch. I had to get up and walk away laughing. I totally left my mom to deal with her. Just like when the BUS of mentally handicapped people came.. they all wanted hugs and I left my mom while I hid behind a bush. It was amazing.

this post made me want to have a garage sale, just to people watch. hmmm, what could i sell....?

Gorilla- I SO want to watch that! Now I just need to get fancier cable...

Bill- So many things you don't know about me- did you know that I'm also a 90 year-old man named Gottfried on the weekends? Well, now you do.

SAS- Take notes! And pictures! Then come back and blog about it- It's nice to know that other people experience the same level of weirdness.

Feisty- Do it! Then, see the above comment for instructions.

What makes me the most jealous is that if I had a garage sale, not one damn freak would show up. Besides the usual meth-addled mullet-ridden people of my area. I want Bai Ling's mom!

Blondie made out with her, didn't she?

Bai Ling Wing Ling Grey Gardens remake. It's like a mantra, or a double dutch chant for the cool girls down the block.

Oh LORD, I think I see her sister on the "L" platform on occasion.

And use your imagination with the tem "see".

The freaks never come over to my hood in Stepford. So jealous!

The only thing vexing me is the man-boobs... otherwise, I think Prince, er, um, "The Artist" shopped your lawn. Right height, right age, purple, wig, boots; sure looks like him/her from behind... all the sad remnants of 1984 stardom.

I am sure that if I had been lucky enough to join you, you could have heard the phrase "Me love you long time sailor"!

Re antibiotic-- the newer powerful types are dangerous to tendons, so best to not work out during and a little after taking it. Any excuse, right! I'm sure you know to eat active yogurt (it's good down below as well).

Sure hope you're feeling better by now...

We call them "yard sales" here, and yes, they generally draw freaks and oddities of all kinds.

Including myself, when the neighbors have one!

Here in Toronto, we get beauties like that that just come to your house everyday to pick through the recycling for empties to take back to the beer store.
Sometimes I just sit and look out my apartment window at them. But I never have seen any floppy tits yet. You folks in the burbs have it so sweet.

The freak shows that are Minnesota garage sales are better than reality TV any day! I'm thinking Wing Ling's cold sores are from huffing.

At my sister's sale, an old guy was haggling a S&P shaker from $3 down to $2. My sister said "OK, but then you have to take something else with you too".

Next time you have a rummage sale, I think you should consider filming the whole thing; poop convos, asian hookers and all. In fact, maybe you could also go to some yard sales as an Asian wigged hooker with an infected foot. That would be funny, too.

PS. Hope you are all healed up. For real! Yikes. Oh and... guess what? The Liberace Museum is closed. I tried to visit that before the Pinball Museum. So sad I missed it. :( Def. let me know if you come to town. Maybe you could hitch a ride with Gorillabuns in a week?!

The reason that lemon balm is ideal in combating these pesky viral infections that it combines a number of important traits in eliminating the outbreak or reactivation of herpes viruses. It acts to reduce stress, a major contributing factor to herpes outbreaks. antiviral balm for herpes


I can only express a word of thanks. Because with the content on this blog I can add knowledge I, thank has been sharing this information. Do not forget to visit our website to share information and knowledge about health. |
Harga Sarang Semut Kapsul Papua |
cara mengobati payudara bengkak |
obat pururigo di apotik |