Photographic evidence that I haven't had that sexual reassignment surgery...yet.

I currently have 573 items in Google Reader, which should give some indication of how my time-management skills (skills which could best be described with the words lackluster and laughable) are these days.  Yesterday found me walking into the walk-in freezer at work, closing the door, then yelling "motherfucker!!!" at the top of my lungs, such was my frustration with the day-to-day.  I can't lie- it always feels good to scream when I'm feeling as overwhelmed as a hooker on "nickel night".

I wondered aloud recently if it would be strange to hire a nanny when you don't have any kids.  I'm finding that maintaining a house, a husband, a job and 4 pets is not as "fun" as you would think it is, assuming that your idea of "fun" doesn't involve endless animal feces and throwing together dinners made entirely of previously frozen novelty foods.  I've been getting disapproving looks lately from the hairier members of the household, and the pets keep looking at me funny as well.  I regularly forget to wash my hair, and I have given up entirely on dealing with the many piles of clutter in the house, choosing instead to turn them into either "art" or cat furniture.

The few odd spare moments have been filled with voracious magazine and catalog reading, wine, hair-plucking, yard maintenance and pizza ordering.  Oh, and I got a speeding ticket, which was nice.

A few photos to use as filler until I get fired, win the lottery, or finally give it all up and retire to a nice tent under that freeway overpass that I've had my eye on: 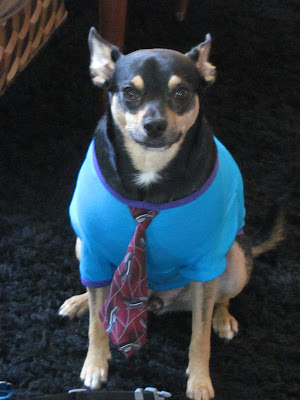 I still find time to dress up the pets, it seems. 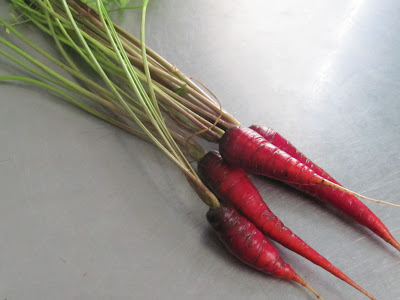 I grew some red carrots. 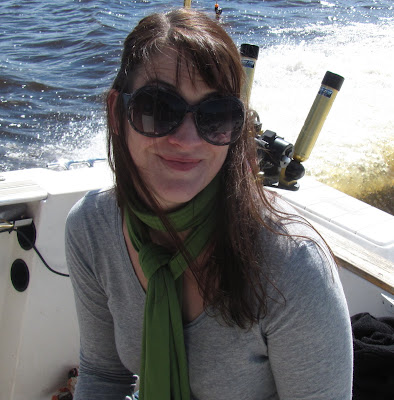 I spent an afternoon on a boat on Lake Superior, and no it wasn't the Edmund Fitzgerald. 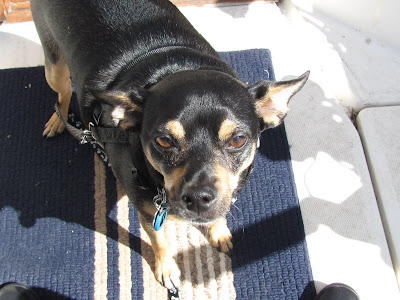 Bubs was on the boat too, though he looks less enthused about it than I was. 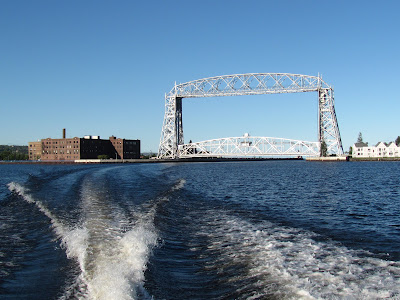 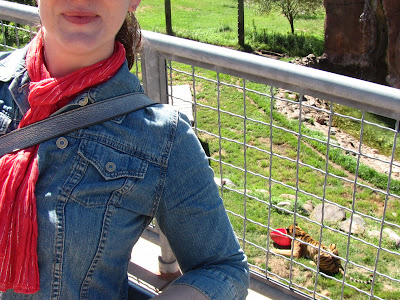 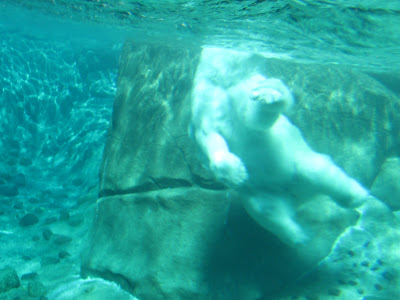 Aaannnddd...there was a polar bear. 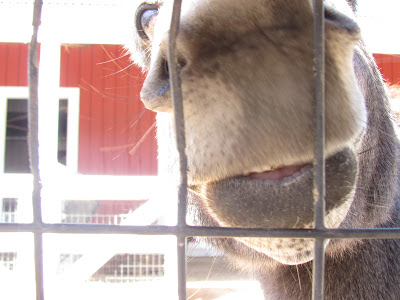 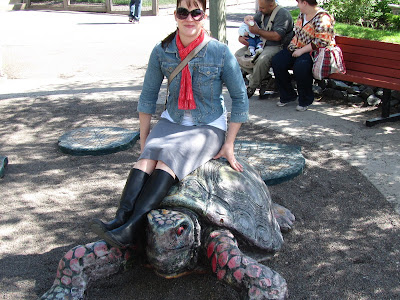 I took a wild ride on a turtle, and you can see the Mr's mad photo skillz at work again. 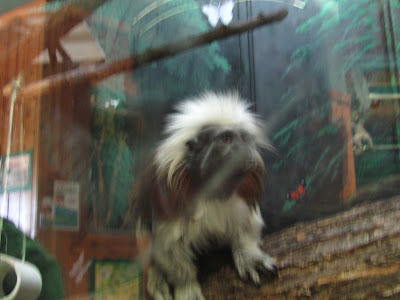 There were some crazy-assed tiny little monkeys with mohawks.  They didn't stop moving for even a second, so all my pics of them are blurry.  I totally want one. 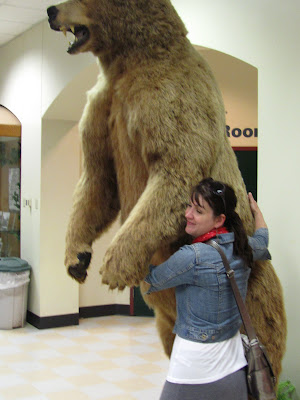 I hugged a friendly bear, and such was my joy that I closed my eyes and took a little nap. 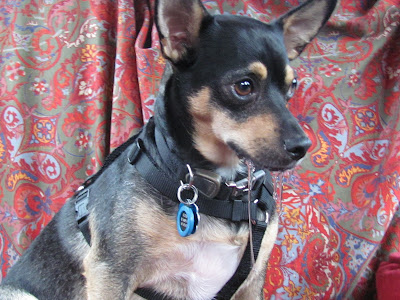 Bubs performing his favorite activity in the back seat of the car on long trips- drooling uncontrollably. 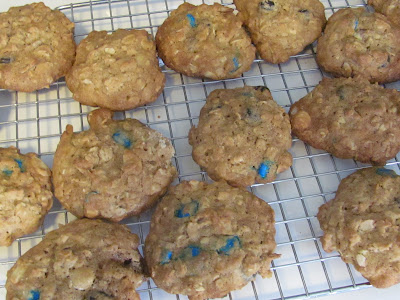 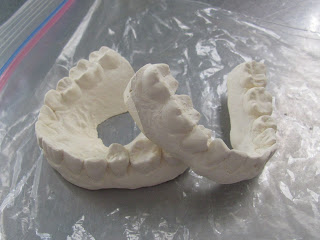 I found a plaster casting of my teeth that I forgot I had. 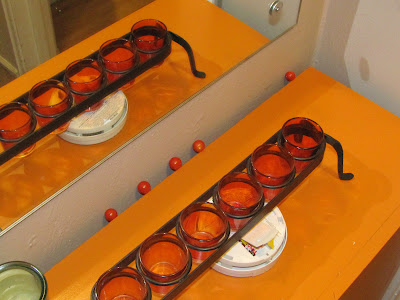 And I found where one of the cats has been stashing cherry tomatoes from the kitchen, for whatever reason.
There you go, my little twitchy mohawked donkey monkeys.  There you go.
Posted by Whiskeymarie at 11:20 AM

Well, IMO, those bitchin' black boots that you're sporting on the turtle's back and the plaster cast of your teeth are the most interesting finds that I've seen photographic evidence of lately.

The boob/tiger shot was a real freaking close second place though. Great composition. The Mr should be commended.

I want a poster with the boob/tiger combo on it.

I'm not sure why, but the cherry tomato stash made me giggle uncontrollably.

If you had somehow been holding the plaster cast of teeth while sitting on the turtle, that right there would have been Pulitzer worthy.

You might not have had surgery, but me and my cable tv plastic surgery committee agree that Bubs looks like he's definitely had some work done, especially in that first pic. According to leading psychologists, this is what happens when one feels neglected. I can only imagine what some of your readers might do should you not begin regularly posting again... no pressure. :)

I often put phamacuticals in my baked goods, too.

people hire help for their pets and their homes. really. two working people shouldn't feel guilty about hiring out a few things...we're busy.

my husband does the same thing. I'm like "Did you get it?" and he's like "Yeah, I got your boobs and your mouth open."

That brainless hack Sarah Palin goes by the code name "North Star." There's only one North Star, and she can be identified by her plaster dental records. : )

Hey, you're on a m**&%f@#!ing boat! Sorry, can't really get that out of my head. All that stuff looks more important that reading, or cleaning, or caring for stuff.

I don't know, it kind of looks like you're getting ready to give the bear a handy.

I could have done without the drool. Yeesh.

I MISS YOU! Call me.

Don't feel guilty about dressing the dog, there is ALWAYS time to dress pets, especially cats because they hate it so much. *evil grin*

Congrats on the carrots. They are harder to grow to maturity than people think.

About Bubs and his unfortunate drooling problem: I think I'd get him a muzzle and line it with panty liners. We used to have a Samoyed that did that and it was GROSS in the extreme.

Is that Valium or Viagra in those cookies, hmmm? Well, either way it's a party, I just can't tell if you'll be playing Barry White or Dark Side of the Moon.

Those dental castings will come in handy if you're ever kidnapped or in a plane crash. Hey, ya never know! It's good to be prepared!

The hidden tomatoes cracked me up, too. I guess the cat is putting by some produce for leaner times to come. Cat sees less attention and care happening and just wants to be safe. Cat doesn't know about sun drying.

I'll split the nanny with you. definitely.

Maintaining a husband - heh.
Hey...I leave for my cruise in just a matter of days. I could probably sneak you in my suitcase since you seem to be needing a little R & R and all. You've been practicing your contortionism right.

You are too funny! Is that a disabled smoke detector under the candle holder? (Read: battery died and who the hell keeps 9v batteries in the house??)