So, as I stated previously, I was having some issues with ye olde job, and due to the stressful nature of impending unemployment/potential hookerizing/hobo wrangling, I needed to step away and spend my time with other worthwhile pursuits, such as reading celebrity autobiographies, drinking cheap wine, and having body odor contests with my dog (against the Vegas-established odds, he won.)

Here's the deal:
I was enjoying the comfort and complacency that only comes from working a job longer than any other that I've worked in my life, when the inevitable stray monkey threw a steaming pile of poo into the works.  Up until recently my employment has been considered "temporary" and "part-time", despite working not only full-time, but overload for the last 5 some-odd years.  It's kind of like refusing to admit that your crack addiction has reached "Intervention" status, even though you sold your younger sister AND a kidney last night for a bit of the rock (yes, I'm watching a lot of addiction-based reality TV lately- it's like I'm addicted to it- HA!  I slay me.)
I was working my ass off, yet I wasn't considered a "real" employee yet.  Such is life.
My arbitrary status was freeing, in a way.  I did not feel obligated to fully participate in 2-day workshops, choosing instead to go, check in, then leave towards the end to go and have a nice (semi-liquid) lunch and do some shopping midway through many of them.  If hating "breakout sessions" with every fiber of my being is wrong, I don't wanna be right, dammit.  I've never really been any good at that corporate-esque brand of bullshit anyways.  Also, I never felt all that bad about not getting to know the names of most of the people that worked in the building with me, other than the janitors and "that dude that wears funky shoes."
That's a name, right?

Anywhat...I, along with 2 of my coworkers, were notified 3 months ago that our jobs were being "posted" (being put up for permanent status), but we'd have to apply, interview, and sweat it out just like any other schlub trying to steal my job from me- stealer! (And several schlubs did indeed try- and fail- to do exactly that.  One of the contenders was compared to Julia Child, a la Dan Aykroyd via SNL in the 70's.  I guess it was hilarious- I'm sad I missed it.)

Long story short- three months, one night of trying to figure out how to write a cover letter (I seriously haven't had to apply for a job since 1999), two grueling interviews that made me consider becoming a nun, one teaching demonstration and endless obsessive (bordering on mental illness obsessive) e-mail checking later, I'm in.
Like that Flynn guy.

So now I can go back to my regular life, whatever that is.  I'm choosing to think it involves making out with Clive Owen on a daily basis, as well as having a personal masseuse,  eyebrow groomer, and toenail trimmer.  Until anyone tells me otherwise, that's my story and I'm sticking to it. 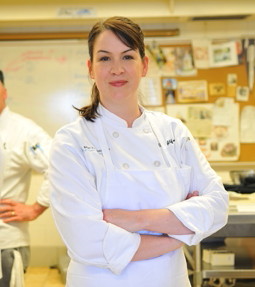 Congratulations, you got...your own job!? That is some messed up hoopla to jump through. Glad you prevailed. Cute picture too! Iwish I could be that photogenic...just once!

Great chef picture. You look like you are ready to kick some ass on "Chopped".

Glad to hear you "made the cut"(haha!). What a pain to have to go through that just to keep your job.

I hope you get a good pay raise, and still get to skip out on those awful meetings!

Congrats on keeping your job! :)

Yay you! Bring on the slicing and dicing!!!

I totally love the picture...and I bet if students had any say you would not have had to sweat it out.

Yeah, I had the same experience. I did my job (university lecturer) so well the admin decided to make it a full time position. I had to reapply. do a resume and interview. Despite the fact it was because of me the position was upgraded I was told I didn't have an inside track, I was just another applicant. So I told them to stuff it and I quit.

That was the last time I had a steady paycheck. From then on i was self employed.

Congratulations, Whiskey. Way to fight for your own job!

That's great news! I've missed your posts, so I hope getting back to your life includes more prolific blogging. You seriously look like you are doing a commercial for a chef show in your picture... it's darling. Congrats.

I am so glad you made it in like Flynn, but will you now have to stay for the entire breakout session?

Ha. I know that routine all too well. I also work for the government and have had to compete for the very job I already had on numerous occasions. Multiple times I did not get the permanent position, but instead was strung along on contract. Anyway, congrats. I know the glory that is finally, after years, being told you are good enough to do the job you have already been doing.
Also: sweet outfit. I don't get to wear anything remotely that cool.

I can relate in the twisted somewhat relatable way that most everybody can relate. I've been at my job 10 1/2 years, more than twice as long as any other prior job. I (and everyone else) have almost complete autonomy, which is the only thing that keeps us here, because the business is a joke (partly because everybody has complete autonomy = no accountability). It's so fucked up and so dysfunctional on so many levels it's mind boggling. It's really hard to take it seriously. I'd LOVE to quit and go pursue my passion, BUT, I'm well paid, and I have security for the foreseeable future. When you're single and staring at 50, security is nearly everything. Gotta milk it for all it's worth, then move on.

P.S. - you would make a terrible nun.

Congrats! And who wouldn't hire you - in all your wonderfulness. I did that last year - interviewed for my own job that is. Got it back but just got the word that it's been hacked to pieces and no longer benefits eligible. Woe is unto me.

Congratulations, I was rooting for you all the time. How ridiculous is this whole system? I've never heard anything remotely absurd in this part of the world.

You look awesome in your chef suit!

Grats on the Rejobisituationaly successfulness you enjoyed!!

Of course they're going to keep you! I have to agree with Scope... I kind of want to see you on Food Network now. That should be your next line of conquering!

oh i'm so happy for you!

Nice work!
But I guess that's why you got the job in the first place.

Congrats on it being all official and shit.

My word veri is "lazies", which I am sure you will NOT be now that the job is yours.

Yes, let's see you on Hell's Kitchen! You could totally win that sh*t!

When you're all cleaned up and in your whites, you look almost normal. Weird!

Wow! Many belated congrats! I've been hooking the temp thing for awhile too and fully enjoyed the not having to participate in the same corporate bullshit as everyone else. Secretly though, I longed to be one of them and (magic word) stable for a change. I'm very happy for you. You look quite smug in your photo and rightly so.

So,..having to both Apply and compete for a job you've been working for Five years.
That sounds about right for us 99%'ers !(Why's my Butt hurt ??)
What a grueling little 90-days of Hell !
If I'm not mistaken, isn't there something in The Constitution about Cruel & Unusual Punishment?
This kinda Sh*t almost makes me glad I've been disabled from Chefing for the last 10+ years.
My only comparable experience was when I was sous chef at an upscale resort, and had to turn-down some raises in order to keep my Son on Medicare. Those raises would have been enough to raise my income to an ineligible level, yet weren't enough to afford the Company's Health Insurance premiums.
From here forward, your supervisor should have Kiss your Ass each morning upon your arrival !