"let me hear your body talk..." OK, maybe that's enough talk for now. Tell your body to shut up. 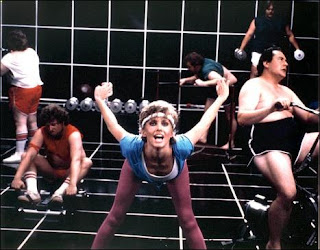 If you've been taking your Adderall like the nice doctor prescribed, you may remember that I joined a gym.  You may also be kind of twitchy and grinding your teeth down to sad and bloody little nubs from the amphetamines, but that's really not my problem now, is it?

A few random observations from my first 6 weeks of sweating profusely from every crease I own in the company of strangers, AKA going to the Y:

*To the oddly-shaped gal who seems to always be there when I am and seems to never, ever leave...
Here's the deal:  Tights do not equal pants.

Did you hear that?  Did it make sense?  Do any of those words exist in your dancewear-as-haute-couture world?

While I totally admire your commitment to such a daring and bold look, I have to say, um...not so much with the execution of said "look".  Semi-sheer footless tights over granny panties?  No, no, no.

My kind but firm suggestion is this:  before leaving for the gym, stop and take a good, long look in a full-length mirror.  If you can see a shockingly accurate outline of your underpants (including the tag), and if your legs look better suited to heels and a party dress, and if you can clearly see where the "control top" portion of your "pants" begins...then I suggest changing before you go.  And yes- yes I know you can afford real workout pants/shorts.  I've seen your ipod and tenners- they're nicer than mine.  You've got no excuse, Ms. Grannypantyhose, unless poor judgment sprinkled with cookoo counts as an excuse these days.

*I was forced to blow my nose in my gym towel the other day while on the elliptical.  I was also sweating like a heavyset, middle aged Eastern European man with impressively excessive body hair on vacation at dance camp somewhere near the Equator.  To the non-sweating, not huffing and puffing all asthma-like gym-goer next to me that day, I apologize.  Seriously- you shouldn't have had to witness that.

*And what about the cute little 20-something Asian-American girl who seems to have the superhuman ability to run for 30 minutes, take a hip-hop aerobics class, then cool down with intermediate yoga, all without so much as a drop of perspiration or even a second of bargaining with the Universe for mercy?  I'm totally trying to not hate you, but keep it up and I'm going to start slipping lard supplements into your water bottle, OK?

*I was on the elliptical (again) the other day next to a dude who looked exactly like Hulk Hogan circa 1987: 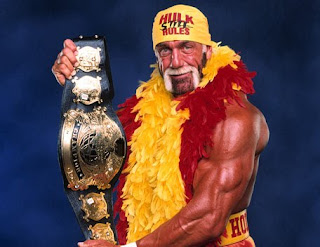 Seriously- Yellow head scarf, red tank top, yellow Zubaz-like pants and the handlebar mustache.  The whole freaking shebang.  I wanted to ask him how he was doing since the divorce, but he was the only person in the gym sweating more than I was, so I knew that it would be best to just leave him be.  Pretty much the last thing you want to do when you're drenched in your own bodily fluids is carry on a conversation about your feelings.

*Also, in no particular order:
Geriatric boobies, Creepy dude that draws odd pictures in a child's notebook while waiting for a certain piece of equipment, Holy shit there are a lot of dudes that lift weights while watching themselves in the mirrors!, The one guy who keeps moving the damn fans despite the "Do not move the fan" signs, Me plotting to kill fan guy for hogging not one, not two, but THREE freaking fans on a 90 degree day when the AC seemed to have given up the will to live, The lady who doesn't wear headphones while working out yet still seems to have some sort of music in her head judging by her insane giggling and singing, Me accidentally taking home several of the gym-provided towels and being too embarrassed to bring them back so they're just sitting in my dining room all smelly, Running into a Lance Armstrong-esque coworker who has like, 8% body fat and does redonkulous triathlons and stuff right after I had a particularly sweaty and red-faced workout and had to make "conversation", More geriatric nudity, and finally- the icing on the cake...

...I'm pretty sure I saw the nutsack of a 60-something dude when it peeked out from his very short shorts.  I'm hoping I regain my vision sometime soon, but if I have to see that again I'll pass on this whole "sight" thing as it may be totally overrated.

Speaking of getting physical, the reason the word exists:


Me-fucking-ow.  Adam, I'll take you, your Ants and your smouldering sexiness anytime, any day, any way.

OK, I have to go now.  I'm all misty in my lady-bits and it sure as hell ain't from working out.
Me-fucking-ow.

XO
Posted by Whiskeymarie at 12:01 AM

I knew a gal named Misty Ladybits, she was quite nice until she got a gander at my nutsack.

I laughed so hard at this because these same people are at my gym also! Do you have a gal there who is still tucking her Michelin Man style rolls into her little spandex outfit with a shoe-horn and thinking that she is still "bringing it"?

And sorry about my nutsack, that is all.

I took the liberty of downsizing Adam. He was getting your lady-bits too misty and I got jealous. It's for your own good, young lady. I mist you. : )

Oh my god you crack me up. We go to the gym at weird times and it's usually empty. Thank goodness, I think.

Lord help me but I love the Adam!

And there is a lady at our Y who dresses like your granny panties and hose chick. Not appealing.

The Y is an odd odd odd world.

I'm trying to decide if your gym is more like a Fellini film, or a Lynch film. Help me out, here. Have you run into a midget yet? Or found a severed ear wrapped in one of those stolen gym towels?

Dr. M- Are you going around town showing off your sack again? Do I need to call the authorities?

Skydad- I guess I can forgive the ball slip this one time, but if I were you I'd get that mole looked at, stat.

J- glad you got my back again, toots.

Lisa- I thought I went at weird times, but I guess that refers more to the people than the time of day.

ML- The Y is a strange place- I think I fit in rather nicely.

Kirby- no midgets or severed ears (yet), but judging from the clientele and overall atmosphere, I'm going with Lynch.

Shanster- I'm sorry! I know it was confusing (especially to me) with all the change-ups- I'm glad you found me again!

The ageless question - WHY do men need mirrors to life weights?

The old guy nutsack made me urp in my mouth a little.

Wash the towels. Consider them a perk. I still have one that says Holiday Inn.

Awww....and I was so committed to starting to go the gym again!

What is it about the gym that brings out the weirdos? The best is that I go to the fitness center at my job and get to see my coworkers in their little gym outfits. Yeeaaahh.

This actually makes me want to join a gym just for the entertainment possibilities alone.

thank you for providing adam... made my morning worthwhile!

I'm a little surprised that the sight of an old man's nut sack shocked someone that, like myself, has descended from the royalty of a happy hooker blood line.

I'm still LMAO at your tales of the gym-life.

thank goodness i'm too broke for a gym or i would be wearing my 20 sizes too small tights and leotard, circa 1988. when i was worked out.

All reasons I work out at home. Last time I went to the gym I wanted to junk punch everyone. But maybe that's because working out is such a chore for me and not just because they were assholes.

Also why is it that the process of working out sucks big hairy donkeyballs but I feel so good afterwards.
Why can't I feel good during too?

On another note I did an aerobics routine to Adam Ant's stripped for a PE class in eighth grade and was chosen to do it in front of the whole school. I know , I know. I'm awesome.

This *almost* makes me want to go back to a gym. I've never seen a birds nutsack while on a run, although I do sometimes imagine the squirrels wearing tights...

PS. Love Adam and that video!

you are funnier than Amy Sedaris. I hope you're archiving this blog to publish someday. I'm serious.

Just because my nutsack hangs a little low does not mean I'm not serious. If you had balls as big as mine, your would hang low too, Baby.

'yours' would hang low.

My big balls distracted me.