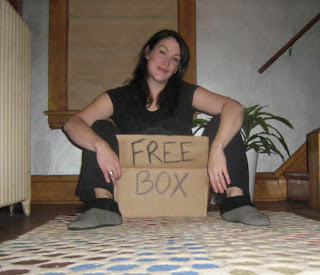 So...
This past weekend, my girl Blondie and I had another of what is now seeming to be a yearly event: The Big Fucking Yard Sale.

Last year, we swore we'd never do it again. Ever.

Two months later we already had enough crap accumulated to outfit the entire cast and set of The Real World: Des Moines and we decided that maybe we needed to give it another go. I figured that if things got really bad, she and I could start mixing whiskey into our coffee cups while we sat in her yard. If things got really bad we could do what we did at our first sale: start trying on all of our early 90's now-way-too-tight clubwear over our clothes while standing in her yard, entertaining both ourselves and our customers. The sparkly hotpants/furry suede jacket over jeans and a sweater with hooker heels combo was a real hit, if I remember correctly.

Yard/tag/rummage/garage sales are strange, strange things- something you totally understand if you've had one, something you couldn't possibly comprehend if you haven't. Blondie & I tend to take a lighthearted approach to it all. We write honest things on the price tags like, "Bring out your inner hoochie!" and "Worn once but then I got too fat for it" and "Great evening bag, hardly used- just the right size to put your coke in!" We throw old cutoff jean shorts and things missing crucial parts in the "free box", just to see if we get any takers.

We also spend a fair amount of the day reminiscing about where and when we wore certain articles of clothing, Blondie very often correcting my fuzzy memories with her own razor-sharp ones. That girl will remember not only what she was wearing when she went to the Love and Rockets concert in '92, but she'll remember if you had a zit on your chin that night and exactly how many times you tried to drunkenly hug the bartender. Me? I remember what I wore, but I very often forget my husband's middle name & birthday so I'm pretty much useless here. I'm lucky to have her- she'll come in handy when we're 80, widowed, and all living in a Florida rambler like the Golden Girls.
The best line of the weekend, as related to this "clothing trip down memory lane": (Blondie thinking about a vintage dress that she sold and delivered to me with a totally deadpan face) "Yeah, I'm positive that stain on that dress was spooge. I'm positive."

We've learned over the years to expect the "weirdo" to "normal" people ratio to be in the 6:4 range- for some reason the prospect of buying my mismatched glassware and exercised-bad-judgment-but-forgot-to-return-them-in-time clothing purchases is too hard to resist.
And, whoo baby- they were out in full force this weekend. Yard sales have a strange gravitational pull on certain groups- The mentally ill, cranky old people, middle-aged singles hoping to find something that will get them air time on the "Antiques Roadshow" and thereby gaining a leg up on the other eharmony folks, hoarders, criminals, fetishists and semi-toothless people are especially sensitive to this phenomenon.

Lord knows, I love me some weirdos. A few of my favorites from this weekend, or as I like to call them- "Whiskeymarie's parade of new best friends"
"So you're Catholic then"

Man, I hate having yard sales.

Man, I love having yard sales.

Anyone want to come and sit in lawn chairs with me at Blondie's next year? I promise cocktails and first dibs on the free box to you- yes, YOU. Deal?

Happy Whiskeymarie's Back Day, Bitches!- my hardly-used and a bargain at 50 cents little nuggets of yard sale goodness. Happy WBD.

XO
Posted by Whiskeymarie at 9:02 PM

Christ, I missed you.

Also, my verification word: "OVENDP". I guess that's when you try to bake two sausages at once? Yeah? YEAH?

LOL. I LOVE the people you meet at yard sales. NOT. They are some strange sub culture! I am not sure if crazy grandma or grabby pants takes the cake. They're both pretty ridiculous!

Wow. Not only will I be at next year's sale, but I will personally set up the entire thing myself while you guys sleep in. I want a yard sale!

I've personally found some of my coolest, most favorite junk items ever at yard sales, including a vintage 1970s skeleton t-shirt that's two sizes too small for my fat frame, yet I love to wear it anyway. Makes me feel all retro.

Yep, I definitely want to get in on this action next year. Just let me know when and where. I'll hide in the bushes with a video camera. It'll be like Taxicab Confessions, but Yard Sale Confessions instead. Yeah.

I don't know why people are so weird with garage sales. . . seriously. I think H definitely should video tape the next one from the bushes!

*by the way, my word verification is "mingle". haha!

This was just so full of laughter I loved every line of it. Watching people is one of my favorite hobbies, followed closely by drinking. I must come and visit next garage sale for both!

If you had wanted to induce a heart attack on the little old woman that was attempting to convert you, you should have told her that yes you are Italian and Pentecostal. That probably would have been sufficient to have sent her quickly to go meet her Jesus.

Everyone knows VonPartypants is German. Duh!

At one of my yard sales some lady wanted to try out the grody old vacuum we were trying to ditch, so we plugged it into an extension cord and she ran around the lawn VACUUMING THE GRASS for about ten minutes before deciding she'd buy it. Crazy.

You got bingoed! Doncha just love it?

See, I always hit yard sales just to check if any stupid people have Pollocks or Picassos for sale for like, $2. All I usually find are paint-by-number clowns for like, $5.

a day spent watching and laughing at the loonies who buy this crap: Priceless!

ok, first, welcome back from monkey-hunting. i know how exhausting that can be. and i don't even have to travel far for monkeys, they are all over the bars on santa monica. most of them do have nice speedos and knee socks on, though, and the older monkeys seem to give them an awful lot of money for standing on those boxes. i wonder if jane goodall and i are related at all.

you KNOW you want me at the next yard sale. i'll borrow the blackbird dress, slap on a red wig, and bring my director's megaphone. you can just discretely signal me when one of these people bothers you. i'll handle it from there.

you HAVE to invite me to come watch your next yard sale. I promise to be quiet and sit in the bushes across the street.

Just who is that I'mnotbenny trying to kid? That SOB is already sitting across the street in the bushes. He's been there since July.

Yes, he smells. No, he won't actually be quiet.

"So how come you don't dress up anymore? Not even for your husband?"

Grandma would have spent the rest of the afternoon trying to pull that walker out of her ass giving me grief like that.

My last yard sale favorite question:
"You wouldn't happen to have any Zuba's around here would ya?"
One person's junky old stuff really does = another person's brand new treasure....
~ Renata1967

Our first (and god-willing last) yard sale happened last Fall. We spent three days getting ready for it, made a little under $100 and by the end of the day had met most of our whackjob neighbors (some of whom still think we're friends because I once sold them a piece of crap). Was it worth it? I'm still not sure.

Aren't yard sales FUN? I once had a nutty lady try to return a love seat that she'd bought for her son. He didn't want it so she tried to bring it back!!

ALL SALES ARE FINAL, BITCH!

Is it just me or did the "free box" pic totally escape John.
What is the world coming to ?

We are having a yard sale on Nov 7th. I'm totally stealing your "honesty tag" idea. Loved this post and I missed you Presh! I want advance notice on the next sale. I'm bringing Manhattans (and no crazy guy, you can't buy the empty glasses!).

Oh man I love this post. Hope you don't mind if I steal this topic. I'll give you the first preview:early bird who showed up at 6am when our ad said 10am and then asked to use our bathroom. He smelled like poo. yup

Okay Whiskey, THAT would be worth the trip across the river one more time in a week.

The old dude with the handcuffs and sparkly barrettes?

The old lady with the walker?

I almost peed my pj's sitting right here at the computer.