The one where I become my own punchline. (insert embroidered-sweatshirt joke here)

Did I mention that I have now inherited yet ANOTHER cat due to my sister's house burning to the ground? 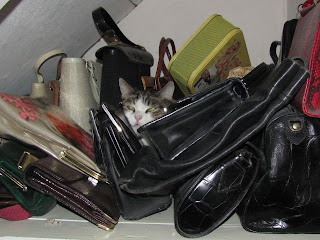 (Bitch loves purses almost as much as I do.)
Yeah.  That brings us to four, if you're counting (Which I'm hoping you aren't, for my reputation's sake).

This one?  She's antisocial, chubby, and smells like smoke.

Yet I still love the shit out of her.  WHAT IS WRONG WITH ME????

Due to her overwhelming odor in the first few days, we named her Bakine.  As in, "Bacon".  She's all hickory-smoked and such.  Is that cruel?  I don't really give a fuck.  She's a cat.  I love kitties.  I give them stupid names- just ask T.J O'Pootertoot and Troubleman.  Such is life.  Live with it.

And for the record, if you're wondering where I am or what I'm up to these days, just follow the scent of cat litter and look for the girl whose forearms look like she recently escaped from a Taiwanese torture chamber.  I'll be the one who looks like she needs sleeves, FYI.   I have no life beyond scooping litter-covered turds, it seems.
Pray to the baby Jeebus of the sacred used cars for my soul, will you?  I think I need it this time.

XO
Posted by Whiskeymarie at 9:01 PM

oh, you're fine. "crazy cat lady" doesn't apply until you get into the 6+ cats category. you're totally in the gray area still...

One more cat and you become one of us.

May the litter always clump,

What, you wouldn't be anti-social if your house burned down?

If they brought back the original old campy Batman, I would totally cast you as Catwoman. In those skin-tight black leathers - meeeooow.

Oh, and, I love you. In a distant friend you've never met depraved creepy kind of Valentine's Day way.

Oh, and I'm thinking about a trip to the MOA for ALL THAT and a BAG OF CHIPS around my Memorial Day-ish weekend birthday. Know of any crazy bitches who might show me the town?

A cat that smells like bacon would go well with my cheesy-smelling dogs.

Good for you for saving her miss partypants!

Perhaps hickory-smoked kitties will become the next trend?
She looks so comfy among the purses.

Honestly, I have more of a problem with embroidered sweatshirts than with having too many cats, even those of the bacon flavored variety. At least you're keeping it real!

Well bless your little heart. If the dogs don't get along with the baby, I'll send her...err..the dogs your way.

I need you to name our cat. We've had her since October. She is referred to as Kitten. Our two year old calls her CAAAAT!!!!! A few things: she is grey, acts like a dog and is the most ungainly feline I have ever seen. You may proceed with the dubbing.